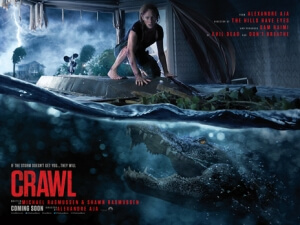 BASICALLY…: During an attempt to rescue her father (Pepper) from a Category 5 hurricane, Haley (Scodelario) becomes trapped in a slowly-flooding basement with wild alligators…

Anyone who has ever moaned about how miserable and inconvenient the British weather is, even when it’s slightly drizzling, no longer has a right to complain after seeing Crawl; as dreary as our admittedly bipolar weather patterns can be, at least we’ve never been trapped in a slowly-flooding basement during a Category 5 hurricane whilst wild alligators hunt us like how a serial killer stalks his victims.

The new creature feature from director Alexandre Aja shows us all that there are, in fact, far worse experiences with severe weather than just simply a gusty wind and muddy fields, and it makes for an entertaining, but entirely silly, survival film that you’re happy to switch your brain off for.

Starting right before a Category 5 hurricane is about to strike Florida, aspiring swimmer Haley (Kaya Scodelario) travels to her old family home to make sure her father Dave (Barry Pepper) is alright after he fails to return her calls. She finds him badly injured in the basement, and very quickly comes face to face with his attacker: a pair of giant alligators that seem to have escaped from a nearby sanctuary, and which easily trap both of them in the basement just as the hurricane hits and water begins seeping its way into the crawlspace. Both of them must find a way to get out of the basement without drowning or becoming the alligators’ lunch, while also finding a way to safety from the hurricane’s destruction in general.

An amusing mix of survival thriller and monster horror, Aja’s film is one that seems to largely be aware of its own silliness. It’s never to a point to where characters are just suddenly acting goofy for no real reason, nor does it really have a tongue-in-cheek sense of humour, but it appears to know exactly what kind of movie it is and sticks to it, without any attempt to be anything that it’s not. In this case, it’s the kind of movie where large CG alligators will suddenly spring out of the water for a quick scare, like how famous serial killers like Jason Voorhees or Michael Myers would lunge from the shadows towards their unsuspecting prey, and where the main characters will sustain pretty major and life-altering injuries – Pepper’s character not only has his shoulder bitten by one of the creatures, but his leg is snapped from getting caught in the pipes whilst being throttled around – but will later be having normal conversations with each other that in no way incorporate the phrase “Ow, ow, ow, ow, ow, my goddamn leg/arm/shoulder etc”. It’s ridiculous, sure, but it’s the fun kind of ridiculous where you can easily sit there and let the silliness unfold without getting too mad about it, because the film never takes itself too seriously for it to fall apart from its own stupidity.

It’s a well-made film, with Aja taking the concept to figurative and literal new heights within the restrictions of its fairly low budget (it cost $13.5 million to make) in effective and amusing ways. He injects a heavy amount of tension in scenes that require characters to be underwater for lengthy periods of time – it’s revealed that Scodelario’s character, being an aspiring swimmer, can handily hold her breath for longer that most others, which gives the film an excuse for at least one extended underwater sequence – and they’re directed fiercely that you feel your heart beat faster as the wild beasts swim dangerously close to our heroes. The set design, particularly during a climactic sequence as the whole house succumbs to the flood, is also a lot of fun and isn’t afraid to get creative with what can and can’t be used in a house filled with water. It’s almost enough to make you forgive the ropey CG used to bring the alligators and certain other things to life, as is the acting from both Scodelario and Pepper who have a good enough screen presence to substitute their thin characters just fine.

Honestly, there’s not a whole lot else to say about Crawl; it gives you exactly what it is advertising, and it does it in an entertaining way without ever getting too serious. If you’re in the mood for a silly but enjoyable survival movie with a little bit of creature feature thrown in there, then Crawl is not a bad movie to check out – because after all, if this movie isn’t enough to make you appreciate the British weather, which is next to nothing compared to how the rain is here, then nothing will.

Crawl takes its simple survival/monster premise and just rolls with it, unafraid to let itself wander into silly territory while not always taking itself too seriously, making for an entertaining ride that’s easy to follow and delivered with such intensity by director Alexandre Aja that it will leave you feeling very fortunate to not have weather as extreme as this (especially here in the UK).

Check out Crawl showtimes in London
via