Cowboys (Review) – An Adorable & Gender-Fluid Hunt For The Wilderpeople 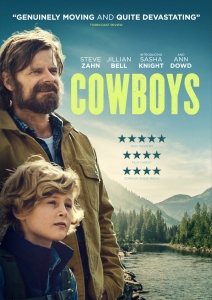 BASICALLY…: A caring father (Zahn) takes his transgender son (Knight) on a journey through the Montana wilderness, against the wishes of the son’s conservative mother (Bell)…

Westerns are often associated with such masculine imagery – men riding on horseback across the American plains, wielding pistols and looking sturdy in leather boots – that it’s little wonder why it’s predominantly boys who prefer to envision themselves in the shoes of John Wayne, Clint Eastwood and other genre actors. However, writer-director Anna Kerrigan’s debut feature Cowboys spares a thought for the transgender youth who also fancy themselves as a strong, sturdy ranger, in a modern Western that strides with sweetness and progressive intentions.

Our young would-be cowboy is Jo (Sasha Knight), a ten-year-old boy who we first see admiring the vast Montana wilderness with his father, Troy (Steve Zahn). We quickly learn that the two of them are on a vast journey together through the environment, against the wishes of Jo’s mother Sally (Jillian Bell), who notifies the authorities when she discovers him to be missing. However, in Sally’s mind, Jo is still the young girl she was born as; it is here that we see, via flashbacks, that Jo clearly isn’t comfortable being traditionally feminine, wearing dresses that Sally parades the poor kid about in, and soon decides that she is really a boy, feeling like he was put in the wrong body by an alien. Unlike Sally, who flatly refuses to accept her child’s decision, the good-natured (if mentally unstable) Troy ends up being very supportive of his now-son, eventually whisking him away on their current journey when it becomes very clear that Sally’s transphobic views are becoming dangerous to be around. Together, father and son trek across the plains as cowboys on their own trail, pursued by local authorities who view Troy as a kidnapper and, because of his mental state, a potential threat.

Playing like a gender-fluid rendition of Hunt for the Wilderpeople, Kerrigan’s film plays best when it’s simply a nice, mellow road trip movie between a manic father and his son who’s just become comfortable with who he really is. Scenes between Steve Zahn and impressive young actor Sasha Knight – who in real life is also transgender, in a positive step in the right direction for overall LGBTQ+ youth representation – are immensely lifted by their impeccable chemistry; they have some adorable back-and-forths, and clearly care about each other as a parent and their child should, though there is an added sentimentality here given that Zahn’s character, for all his manic episodes and decisively redneck background, can be so open and accepting of his child’s gender identity because he really does love him to bits. Zahn’s performance is a neat blend of both the actor’s comedic and dramatic past roles, even channelling the spirit of Robin Williams during some of his character’s crazier moments, and despite a number of flaws you really do feel for this character and his efforts to make his son’s world a safer place.

While the film shines brightest when it’s focusing primarily on these two and their wholesome odyssey together, there is a lingering sense of familiarity every time we cut back to what Jillian Bell and the authorities are up to. Whenever this happens, the film turns into more of a standard procedural as we follow Ann Dowd’s sympathetic cop tracking down Troy and Jo, gathering clues as to where they might have gone, and getting frustrated with Bell’s character as she doesn’t prove highly useful when giving handy information about her child. This also leads into how Bell, for all her efforts to stray as far away from comedic type as she can here, is playing a character who is largely defined by her stubborn denial of her own child’s decision to be someone else, which makes her come across as extremely, even irredeemably, bigoted. She’s obviously been given a redemptive arc, as someone who must recognise that her child is who they want to be and not what she wishes for them to be, but it doesn’t feel entirely earned because it’s so difficult to empathise with someone who’s constantly delivering mental abuse upon young Jo for wanting to play with cowboy toys instead of dolls.

The film definitely has good intentions overall, though, as it seeks to drive home a nice message about acceptance and unconditional love, which is made more poignant by the strong performances and some fine debut filmmaking on Kerrigan’s part which neatly captures the vast atmosphere of the American wilderness. While it doesn’t always show its most valuable side, Cowboys is a good film that’s easy to like and get behind, in addition to it being a much-needed step forward in general LGBTQ+ representation, particularly among trans youth who often become so marginalised in the media that it’s sadly easy to forget that they exist – but not if Kerrigan and Mr. Sasha Knight have anything to say about it.

Cowboys is a sweet-natured modern Western that works best when it’s solely focusing on the lovely nature between a great Steve Zahn and his equally impressive young co-star Sasha Knight, who represents a positive step forward for trans youth representation, although lesser plot points such as Jillian Bell’s bigoted role drag it down from time to time.

Cowboys will be available to rent or buy on digital platforms, including Amazon Prime Video, from Friday 7th May 2021.