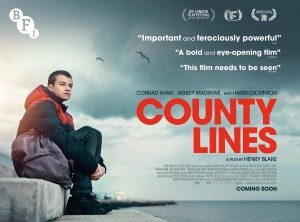 BASICALLY…: A 14-year-old (Khan) is groomed into a dangerous drug trafficking criminal network…

The closing title of Henry Blake’s harrowing debut feature County Lines reports that up to 10,000 teens in the UK, some as young as 11, are being used as expendable drug runners. That’s already an alarming statistic, but Blake’s film suggests something even more terrifying: that it’s incredibly easy for them to be drawn towards it.

The film takes one case that could resemble hundreds, if not thousands, of others: 14-year-old Tyler (Conrad Khan), when we first meet him, is a quiet, sullen teen who’s bullied at school and often left alone with his young sister Aliyah (Tabitha Milne-Price) in a tiny flat while their mother Toni (Ashley Madekwe) works night shifts cleaning at a hotel. He is saved from a scuffle by a slightly older gent named Simon (Harris Dickinson), and the two begin hanging out, with Simon even buying him some new shoes and a nice meal. It’s all part of Simon’s scheme, though, as he soon manages to persuade Tyler to head miles away on the train to deliver a bag of pills – hidden in a rather delicate place thanks to a jar of Vaseline – to a derelict crack den, the home to an aggressive drug dealer and the bony, desperate junkie who begs and weeps for her next hit. These patterns of behaviour, in addition to his new lifestyle, begin to rub off on Tyler, slowly turning the introverted teen into an unrecognisably monstrous ego.

The power of Blake’s film is in its depiction of just how quick someone like Tyler can be drawn into this criminal line of work, as well as why they’d be fine with doing it. He is almost immediately shown to be very vulnerable, easily picked on by school bullies and quick to start fights, but also lacking a proper parental figure with his mum either sleeping in all day after her night shift, or bringing home men for the night after a few drinks with her kids in the other room sleeping. The fact that Simon seems to be one of the first few people in a while to actually acknowledge him, showering him with generous gifts and apparent sympathy, only fuels Tyler’s desire to want to please his new friend all the more, and thus his grisly descent into the criminal underworld begins. In his script, Blake charts Tyler’s descent as a tragic cautionary tale, laying out the damage it does not just to his own psyche but also his extremely fragile family, which bears the full brunt of his newfound aggressive nature in one devastating scene. His direction also allows for a lot of hard-to-stomach violence to land exactly where it needs to, as difficult as it can be to watch, as it really drills in how grimy and dangerous this line of work can be, especially for someone who is still far too young to experience these things.

Young Conrad Khan delivers an outstanding lead performance, nailing his character’s vulnerability, easily exploited by a slimy Harris Dickinson (who is perhaps too good at playing the local sleazeball), and his later penchant for aggravated intimidation that makes him both legitimately scary and also very tragic. Equally marvellous is Ashley Madekwe, the Skyler White to Tyler’s Heisenberg whose initial irresponsibility as a parent leads to his attraction to drug running, and later on expresses tremendous guilt for letting him continue what he does, despite knowing its incredible danger. Both are under sublime and stylish direction by Blake, who frames shots with a slight boxed-in aspect ratio and transitions with slow edits reminiscent of a classic old Hollywood crime epic. He adds his own twist to the substance, though, by not shying away from some extremely harsh moments that explore the unforgiving rough conditions these young people are unshielded from; characters are violently beaten up, acid thrown in their face, and stabbed in sensitive areas simply because they’re on somebody else’s turf.

A crowd-pleaser, this is not – as if that really needed to be said by this point. It’s definitely a tough watch, not just with its violence but also its all-too-real depiction of how easy it really can be for someone that young to be groomed into committing dangerous acts, and morphed into someone unrecognisable because of it. You might need a tough stomach to take in the unpleasantness, but it is an effective drama with solid performances and strong filmmaking that leaves a powerful message about the real figures that young Tyler is only a very small percentage of.

County Lines is a harrowing but effective drama about the dangers of drug running, as well as a stern cautionary tale about the vulnerable young people groomed into that line of work, held together by strong filmmaking by debut director Henry Blake, solid performances from young lead Conrad Khan and Ashley Madekwe, and some harsh but well-filmed moments of violence and intimidation.

County Lines is out now in cinemas across the UK, and on demand.