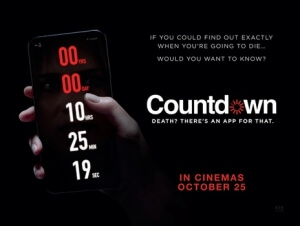 BASICALLY…: A phone app that tells people how much longer they have to live begins to haunt a group of people…

Sadly for us UK viewers, Countdown is not the extreme movie version of the hit Channel 4 words and numbers show. It is, in fact, a horror film that desperately wants to try and be an episode of Black Mirror, but fails so hard at aping the correct tone and sophistication that its very existence becomes – you guessed it – a Countdown conundrum. Except, you don’t need vowels or nouns to spell out the sheer stupidity of this movie.

It revolves around the existence of the titular phone app, which unsuspecting users download and then get to see exactly how long they have left to live. Some are lucky enough to get 60 years left, others around 30 or 40, but for nurse Quinn (Elizabeth Lail) she discovers she only has less than three days. As she tries desperately to beat the clock and effectively cheat death, Quinn also learns that there is a much more powerful force stalking her and a few others that seeks to torment them if they stray from the path they seem destined to be on.

Basically, it’s Final Destination in mega-bytes. And it’s about as silly as it sounds.

It’s a horror film that desperately wants to add commentary about the tech-dominated world we live in, while also having a somewhat tongue-in-cheek sense of humour similar to the Happy Death Day movies, but it is neither funny nor insightful, and it’s especially not scary. The amount of cheap jump-scares this movie constantly tries throwing at you from all angles is astronomical, so much so that the film quickly loses any real bite around the fifth time a scary demon pops out with a loud musical stinger. The only time that the humour does come alive – it’s otherwise flat and tonally inconsistent – is when supporting characters such as Tom Segura as a snarky phone store manager and P.J. Byrne as a geeky priest show up, both out of completely different and more interesting movies that give the film a sense of life that the bland leads can’t seem to give (although it’s not necessarily a fault of lead actress Elizabeth Lail, so good on Netflix’s You; she’s just not given much to work with). As for its attempt to say something about the nature of modern technology and our over-reliance on it, it largely glosses over any of that provocative thinking in favour of even more cheap jump-scares. It doesn’t have anything clever or new to say about any of it, it’s just another mediocre horror film, which somehow makes this film an even bigger wasted opportunity than most of the other lacking frightfests out there right now.

In fact, the film bizarrely has more to say about sexual harassment than it does technology, in a very out-of-place sub-plot that sees Peter Facinelli basically play Dr. Harvey Weinstein as he makes inappropriate gestures towards the lead character. In a different movie it could have worked fine, but in a horror movie about a killer phone app? THAT’S the movie you choose to discuss the harrowing topic of sexual assault in the workplace? That just feels cheap and cynical on the writers’ part, who presumably saw several articles on the #MeToo movement and decided to incorporate it somehow into their dumb horror flick as a means to score some thematic points from critics, which is kind of gross when you really think about it. Beyond that, the whole thing doesn’t even feel all that essential to the movie itself, as it could have easily been written out and replaced with something far more suitable for this type of film.

There’s honestly not that much else to say about this movie; it’s just another bad horror flick that doesn’t really work as anything, be it a scary horror film, a pitch-black comedy, a thoughtful commentary on modern technology, and especially not as an oddly out-of-place sexual harassment PSA. If you want to watch a movie this Halloween that’ll give you all the spooks and chills you want, just save your money and wait for Doctor Sleep instead; that movie hasn’t even come out yet, and already it’s a far better choice for a Halloween cinema trip than Countdown, which honestly can’t get itself to zero quick enough.

Countdown is a frustratingly bad horror movie that fails to grasp its potentially interesting premise for all the thematic weight it suggests, and instead wastes it on a series of uninspired jump-scares, uninteresting lead characters, and an unfocused sense of humour which it really could have used more of to at least be memorably bad. Further points deducted for a bizarrely out-of-place sexual harassment sub-plot that feels cheap and cynical within this already rotten conundrum of a movie.

Want to decide what the movie’s like for yourself?
Check out Countdown showtimes in London
via