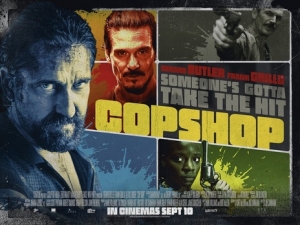 BASICALLY…: A con artist (Grillo) gets himself arrested to hide from a lethal assassin (Butler), only for the two of them to be locked up together…

Joe Carnahan is one of those action filmmakers who definitely knows his audience, and because of that always seems to make films that rarely ever undermine his viewers’ intelligence. Well-received thrillers like Narc, Smokin’ Aces and The Grey received strong receptions for their no-holes-barred, heavily engaging action as well as their surprising sense of humour, and with his latest feature Copshop he’s bound to win over audiences once again, for it is a film that runs on a simple premise, and the kind of sly script that Shane Black and Guy Ritchie have wet dreams about.

The film, which Carnahan co-wrote with Kurt McLeod, is set predominantly in a quiet police station in the middle of the Nevada desert. Rookie cop Valerie (Alexis Louder) is on duty when she is assaulted by long-haired grifter Teddy Muretto (Frank Grillo), who did so in order to be arrested and placed in the station’s holding cell, seemingly away from harm. Not long afterwards, though, lethal hitman Bob Viddock (Gerard Butler) feigns a DUI so that he too can be locked up alongside Muretto, who is the man he was hired to hunt down, and soon both men are staring each other down from opposite cells. As if that weren’t enough, crooked cops, dirty Feds, and a psychotic assassin named Anthony Lamb (Toby Huss) all make themselves known throughout the rest of the night, leaving Valerie to decide which of the two locked-up men she should place her trust in if she is to make it out alive.

Copshop isn’t the trickiest film to figure out, as you can pinpoint nearly every beat this plot makes the moment that it happens, but its simplicity makes for a somewhat refreshing structure, one that (thankfully) doesn’t rely too heavily on a non-linear narrative and keeps most of the action contained to this singular building. It is, in a way, reminiscent of Ben Wheatley’s Free Fire, with a lot of the spicy dialogue and numerous characterisations that carried that non-stop action-comedy, though Carnahan perhaps has a sharper tongue for writing intricate, pop culture-referencing dialogue which, again, is very much in Shane Black’s wheelhouse. He and McLeod give some fun zingers to Gerard Butler, Frank Grillo and the rest of the game cast, who all appear to be having a blast acting in this very lo-fi actioner, which is made all the more fun based on their natural screen charisma alone.

Though it is entertaining, Copshop does suffer from its limitations. Because the vast majority of it takes place in a single location (which something like Reservoir Dogs got a lot more use out of), it leaves a certain amount of vital external information loosely hanging. What, for instance, is the source of one crooked cop’s criminal ties? Who hired Butler’s Viddock to settle a score that involves an assassinated Attorney General? And why, oh why, does Frank Grillo have Tommy Wiseau’s hair in this movie? Don’t expect answers to most of these questions, some of which are intentionally left vague, but by letting us in on some of the more essential parts, we probably wouldn’t be confused when certain things start happening, or when certain people show their more villainous side. You also shouldn’t expect either Frank Grillo or Gerard Butler to do much in terms of action, since they spend most of the movie locked in separate cells, using only their sharp wits to psych out their law-abiding overseer Valerie in order to escape their shackles.

Though it certainly could have used a wider scope to tell its contained story, Copshop is a fun enough sit. The dialogue is cracking, it contains memorable characters, and especially in its second half there’s gun-toting carnage aplenty. Carnahan makes it all the more crowd-pleasing with a knowing sense of humour which gives his film an identifiable personality that’s easy to enjoy, no matter how brutal it gets.

It’s imperfect fun, which is the absolute minimum we’d expect from someone like Joe Carnahan.

Copshop is made enjoyable thanks to director and co-writer Joe Carnahan’s simple plot and sharp dialogue, as well as some fun performances, though its limited scope doesn’t match its clear ambition.

Copshop is now showing in cinemas nationwide – click here to find a screening near you!