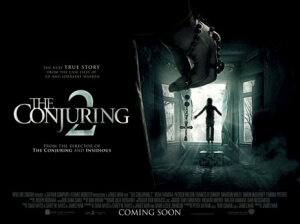 BASICALLY…: Ed and Lorraine Warren (Wilson and Farmiga) investigate a series of hauntings and demonic possession at a home in Enfield, North London…

The mini-Renaissance of horror continues with a sequel to a film many consider to have started the whole thing off in the first place. But while James Wan’s The Conjuring was a smart, engaging and – best of all – scary film that took its time establishing the characters and spooky atmosphere instead of filling it with useless jump scares and clichéd writing, nobody could have predicted its sleeper box office success, with $318 million worldwide next to a $20 million budget being well above average for even the most standard horror film. It was proof that not only could there still be life in the genre yet, but that good examples of it such as this could be – gasp! – profitable.

It’s therefore encouraging to see that The Conjuring 2 has already gone down a treat in the States, with positive reviews and an opening weekend of $40 million as of writing this review – as it should, because this is the rare horror sequel that is truly on par with its predecessor, and not some cheap cash-in like so many others out there.

Once again, we follow paranormal investigators Ed and Lorraine Warren (Patrick Wilson and Vera Farmiga respectively) who, after a chilling prologue documenting their involvement in the famed Amityville case – which is actually better than many of the films based on it – decide to wind down their practises when Lorraine experiences a horrifying premonition. Meanwhile, across the pond in the suburbs of Enfield, North London, single mother Peggy Hodgson (Frances O’Connor) and her four kids are being plagued by an evil spirit claiming to be an old man by the name of Bill Wilkins, which possesses 11-year-old Janet (Madison Wolfe) and generally makes their lives uncomfortable, to say the least. The press exposure in the UK eventually reaches the Warrens in America, who are sent by the church to observe and report on whether the haunting is genuine or not – this being a movie, however, things get real far too quickly.

What’s fascinating about this movie, despite it having virtually the same plot as the first one – unknown entity is haunting a family, the Warrens are called in to save the day – is how fresh it still feels even with a recycled story. Wan has always excelled at crafting horror tales from the first Saw movie to Insidious to, of course, The Conjuring because every time he makes one, he remembers to add the crucial ingredients of humanity and suspense to an already unnerving set-up. That way, not only are the scares more than earned after enduring such steady scenes that build on the creepy mood and atmosphere, but we actually care about who it’s happening to because they’re written to be actual people rather than your average stock set of characters. The Warrens, for instance, are an incredibly likable couple whose heroic tendencies even in the face of certain danger already make them admirable leads, but in addition they also have intelligent conversations with each other and with other people about the several possibilities surrounding the validity of this particular Enfield case, so we are immediately drawn into their practises and want to know more about them in ways even the film doesn’t touch upon. What’s more, they find moments to relax and be actual people, like a wonderfully sweet scene where Ed plays Elvis Presley’s “Can’t Help Falling in Love” on the guitar as he looks lovingly at his wife, and it’s genuinely heart-warming even in a film with a demonic nun lurking about.

Said nun is one of the many creepy and genuinely scary additions this movie has to offer, all of them executed so well by a true craftsman like Wan that even the weakest fright still sends a shiver down your spine. Being heavily reliant on practical effects like make-up, wires and set trickery makes it, much like the first film, very reminiscent of a classic 70s horror film (not least because both Conjuring films are both set in the same time period), something that Wan is clearly fond of and does his best to replicate with love here. However, he also brings in some of his own touches that make some scenes far more chilling and nightmarish to behold, leaving a lasting impact as a result. One such addition is of an entity known as the Crooked Man, which is brought to life by frequent horror film actor Javier Botet – best known for appearing as monsters in films like REC and Mama – who, through sheer physical performance and sharp attention to detail by the film’s editors, moves and feels like a stop-motion creature that even Ray Harryhausen would call terrifying. Another one compliments Wan’s tight and frankly great direction, in a one-shot scene where Ed tries to communicate with the evil spirit occupying Janet’s body, but while Ed is more in focus the “spirit” is extremely faded into the background and all we can hear is its sinister voice, blurring the lines between what’s real and what’s supernatural all the more. Every single scare this movie has to offer more often than not hits bullseye, and it’s thanks to a filmmaker who well and truly knows what the horror genre is all about.

Looking back on it, The Conjuring 2 truly is a remarkable film; not only is it a horror sequel that is actually just as good as the original, not only does it actually manage to be incredibly scary with each and every attempt to frighten the audience working, not only does it focus on characters you actually care about, but it also perhaps represents the horror mini-Renaissance at its peak; and as long as there are filmmakers like James Wan out there who are willing to go the extra mile in order to deliver the goods, then we could be resting on top of that peak for quite some time.

The Conjuring 2 is a remarkable horror sequel that manages to be just as good as the first, with director James Wan presenting scares that are genuinely effective and characters you truly care about, just like a good horror film should do.