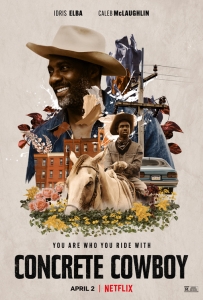 BASICALLY…: A teenage boy (McLaughlin) spends the summer with his father (Elba) in an urban cowboy community…

Black cowboy culture extends way beyond Lil Nas X’s hit single “Old Town Road”; according to historical records, about one in four horse-riders during the Old West was African-American, but Hollywood whitewashing has all but erased them from existence, leaving some such as the Fletcher Street community in Philadelphia – now the subject of director and co-writer Ricky Staub’s gritty coming-of-age drama Concrete Cowboy – to continue their ancestors’ legacy.

Finally, though, the Fletcher Street riders are given their time of day in a smooth and likeable flick that’s like a modern-day Western, with all the usual bells and whistles attached to its swanky cowboy boots.

We begin as troublemaking teen Cole (Caleb McLaughlin of Stranger Things) is expelled from school in Detroit after getting into yet another fight, and is transported by his frustrated mother over to Philadelphia, where he is forced to spend the summer with his estranged father Harp (Idris Elba). At first, Cole struggles to adapt to his father’s vibrant urban cowboy community – which Harp is so embedded in that he shares his home with a live horse – and begins hanging out with cousin and childhood friend Smush (Jharrel Jerome), who is himself in deep with some local gangsters, but eventually Caleb learns the ways of the Fletcher Street cowboy, from properly shovelling horse waste out of the stables to taming and riding one of the wilder horses, and even grows a bit closer to his distant dad, who acts more like a father figure to the people in his community than his own son.

While the plot certainly has the hallmarks of a typical coming-of-age drama (and it is of no shock that the movie is based on a piece of young adult fiction by Greg Neri), Concrete Cowboy is able to competently pull most of it off with its vibrant world-building that allows us to explore more about this tight-knit community and their history. It’s fascinating to hear some of the residents swap stories about how things used to be back in the glory days of cowboy times, and how they themselves have grown close to these ways; in a neat twist, some of the actors – including Jamil Prattis as a local paraplegic, and Ivannah Mercedes, who serves as a sort-of romantic interest for Cole (I say “sort-of”, because it’s something that comes out of nowhere) – are revealed during the end credits to be actual Fletcher Street riders, a fact which adds some levity to some of their performances and emotional monologues. The same can be said about more professional actors like Idris Elba and Caleb McLaughlin who, despite obviously not coming from this particular background, deliver some great performances that feel very grounded and captivatingly human. Seeing just about everyone interact with each other and their community is legitimately cool to watch, and thanks to Staub’s strong filmmaking and the functional mechanics of his and Dan Walser’s script, the audience feels just as at ease as the actors on screen clearly are with each other.

Where it slightly wobbles off-balance, though, is when it falls more into the trappings of the familiar coming-of-age and Western narratives. Scenes of Cole experiencing some of the murkier sides of local neighbourhood life, particularly whenever he’s around his pal Smush, achieve the desired effect upon the viewer, but threaten to mix radically different tones into a plot you’re already much more interested in, which can sometimes seem out of place despite the grittiness that has been established. The film’s climax also stretches some of its credibility, as does a foot-chase roughly around the end of the second act, both of them opting for a contrived series of events that, again, don’t entirely match the rest of the film’s grounded and more realistic vibe.

Even if the film doesn’t always stick the landing, there’s no doubt that Concrete Cowboy provides a solid calling card for its filmmakers, and most importantly sheds spotlight on an underrepresented community that is fascinating to learn about. It raises strong issues such as gentrification and the eradication of this culture from the mainstream history books, but also doesn’t forget to actually be a movie, which it neatly is with its handsome cinematography and wholesome characters. It definitely isn’t a perfect movie, but it’s certainly got a lot of horsepower to stand out as a perfectly decent one at the very least.

Concrete Cowboy is a solid coming-of-age drama that sheds a spotlight onto a fascinating community of cowboy riders, with enough strong filmmaking and great acting to overcome some of its narrative pitfalls.