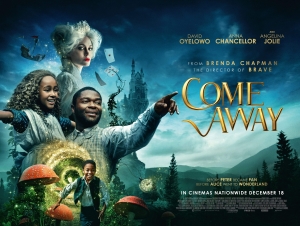 BASICALLY…: Siblings Peter (Nash) and Alice (Chansa) are drawn towards the fantastical worlds of Neverland and Wonderland while trying to help their grief-stricken parents (Jolie and Oyelowo)…

Now here, we have a concept that should work: the classic literary characters of Peter Pan and Alice (of Wonderland) as brother and sister, each discovering their respective fantasy worlds in the aftermath of a close tragedy. The concept isn’t entirely new – John Logan’s play Peter and Alice focused on the real-life inspirations for the characters meeting in 1930s London – but the potential to truly tap into the imaginations and, indeed, wonder of the young children in a more realistic setting is fresh and intriguing.

So why, despite all its promise, does Come Away not entirely work?

It’s certainly an ambitious project, and you can tell that director Brenda Chapman – the acclaimed director of animated hits like The Prince of Egypt and Brave – went in with some kind of vision for its themes, but the execution is sadly muddled, uncertain of the potential it sits upon, and ultimately squanders any chances of fully living up to its promising concept.

The film is about a trio of siblings: the adventurous Peter (Jordan Nash), the studious Alice (Keira Chansa), and their bright older brother David (Reece Yates), whose parents Rose (Angelina Jolie) and Jack (David Oyelowo) – cue the Titanic jokes – encourage them to let their imaginations run wild around their countryside family home, much to the disappointment of Rose’s snobbier older sister Eleanor (Anna Chancellor). However, their happiness is short-lived, when David – the walking, talking red-shirt that he is – suddenly dies in a freak accident, leaving the family devastated; Rose takes to day-drinking to drown her sorrows, while Jack resumes his gambling habit that lands him in hot water with local creditors. Peter and Alice soon decide to help their grief-stricken parents out by trying to find a way to rid them of their troubles, and in doing so discover more about the respective fantasy worlds of Neverland and Wonderland.

However, if you think this movie is actually going to be spending any amount of time in these places, then you are gravely mistaken. The movie treats itself as an origin story of sorts for both Peter and Alice’s adventures – and is, while we’re on the subject, a lot better than recent new versions of the stories like Pan and Tim Burton’s Alice in Wonderland – but think of it more as an origin movie if this was in the Snyder-era DC universe. I say that, because this movie is surprisingly dark and dreary, perhaps too much so for a young audience; this is a story in which characters not only die tragically, but will spend entire scenes doing nothing but mope about the house, and may or may not even have their hands chopped off at a moment’s notice. There’s nothing wrong with having dark elements in a family-centric film – hell, the 1980s alone saw some pretty intense moments pop up in films designed specifically for young children – but there needs to be a balance between the dark and the light, and unfortunately the film feels too wrapped up in its own misery that it often forgets to be entertaining for both children and adults.

The film also cannot seem to stop throwing constant references to the stories it will eventually turn into, as if to compensate for the fact that we visit neither Neverland nor Wonderland at all in this movie. Specific lines from both J.M. Barrie and Lewis Carroll’s tales are uttered almost verbatim, certain characters pop up who are identical to or heavily reminiscent of iconic figures from those tales – Clarke Peters pops up in a couple of scenes as an eccentric and possibly deranged man in a flamboyant hat, so guess who he’s obviously meant to be – and entire monologues are devoted to giving the exact details about a popular fairy’s own origins. Not only are these references shoehorned in, but they are so unsubtle that they take you out of the story and leave you thinking of nothing more than how you’d much rather read the original stories of Peter Pan and Alice in Wonderland instead.

The blame cannot be entirely placed on Chapman’s direction, because again she does clearly appear to have gone into this with good intentions and a compelling enough visual style (there are moments when you can see the magic on-screen that the film otherwise lacks), nor is it any of the actors’ fault that it doesn’t work as well as it should (Jolie and Oyelowo, in more restrained turns, do fine nonetheless, as do the main two young actors playing Peter and Alice). Once again, it all boils down to the script, here provided by Marissa Kate Goodhill with her feature debut, which struggles to find a right tone to settle on, or a clear balance between what is real and what is imaginary; it’s never explicitly confirmed whether all of the fantastical elements are actually happening, or simply in the minds of its young protagonists, which can be confusing if you’re trying to make sense of what is going on. It wants to be both a real family drama and a children’s fantasy, but it never finds a compromise and instead flip-flops from one to the other rather clumsily in certain parts.

If properly tightened up, this script – and by extension the whole movie – really could have been an inspired mish-mash between both of these timeless stories. Instead, it’s a messy, solemn affair whose good intentions cannot disguise its disappointing waste of potential.

Come Away is a disappointment that wastes the potential of its concept about the lead characters of Peter Pan and Alice in Wonderland as siblings, as well as the good intentions of director Brenda Chapman and her cast, on a script that fails to strike a proper balance between dreary family drama and whimsical fantasy.

Come Away is out in cinemas across the UK on Friday 18th December 2020.