Come As You Are (Review)

Come As You Are (Review) 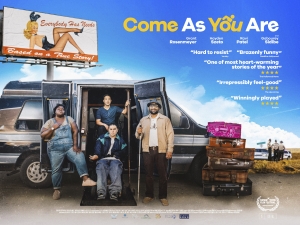 BASICALLY…: Three disabled friends go on a road trip to a special brothel in Montreal that caters exclusively to their needs…

Sex is one of the most universal languages out there; everyone knows it, everyone understands it, and it brings people together (figuratively and literally). For some, however, it’s not as easily accessible, but it’s not completely impossible either, which is what Come As You Are manages to highlight in its own unique way, throwing a bone (ahem) to the disabled community and how they, just like everyone else, have certain desires that need to be seen to as much as any able-bodied persons.

But what could easily degenerate into a lewd, crude and obnoxious sex comedy, like the bulk of raunchy movies made in the wake of American Pie and Road Trip, instead props itself up as a thoughtful, heart-warming, and often very funny movie about real people simply trying to get laid.

The plot kicks off when Scotty (Grant Rosenmeyer, who also serves as a producer), a 24-year-old quadriplegic who has to rely on his chatterbox mother (Janeane Garolfalo) to do the most basic of tasks for him, learns about a brothel in Montreal that caters exclusively to people with physical disabilities. Inspired to lose his virginity, he coaxes new arrival Matt (Hayden Szeto), a former boxing athlete who’s now wheelchair-bound, and therapy centre worker Mo (Ravi Patel), who is visually impaired, into making the trip with him, and hires van driver Sam (Gabourey Sidibe) to escort the three of them to the escorts in French Canada.

Typical road-trip escapades ensue, from escaping the oncoming wrath of their overprotective parents – who they unwisely did not tell about the trip – to getting into bar fights, to even driving the van despite not being able to see anything. It works, though, because not only is a lot of it done with a very strong amount of comedic timing and choice editing that makes the humour land even harder, but it’s also very genuine and sweet-natured, with a little bit of edge that’s just the right amount without going too far over. The movie is a remake of a Belgian film called Hasta la Vista, which itself was inspired by the real-life sexual adventures of a disabled guy named Asta Philpot (who cameos as the founder of the brothel in this film, and also appears during the credits during an archival interview), and I don’t know if the original movie offered the same level of comedy and heart as this one does, but it’s a fascinating story regardless and it tells it in a very economic and accessible manner where you’re having as much fun and thrills as the main characters.

Director Richard Wong and writer Erik Linthorst do a fine job of making you want to root for these characters and their ultimate goals, as do the actors who share strong chemistry with each other and feel exceptionally human without forcing you to entirely sympathise with them. Not once do they allow their disabilities to define their characters, because there’s plenty more things about them than just that; Scotty, for one, is a loud-mouth, certainly obnoxious sometimes but never excruciatingly so, and Rosenmeyer isn’t afraid to let his character be a dick sometimes either, which the movie does call him out on. Szeto and Patel are both also very likeable and charismatic, as is Sidibe who I’m surprised isn’t in more movies given the natural on-screen presence she has (then again, the last thing I remember seeing her in was Grimsby, and I’d want to lay low for a few years after appearing in that too).

As for the “controversy” surrounding this film, specifically the fact that three able-bodied actors are playing physically-disabled people, I really don’t care. Yes, disabled actors certainly deserve a fair shake in the industry, but as a disabled person myself (strictly neurological, though), I honestly didn’t have a problem with it, because the performances and the film itself were good enough to let that slide. If this were a lesser and much more cynical movie with performances that did not come to life as much as they do here, that would honestly be more offensive because it would make the disabled community look far worse than it truly is. Here, they really give these characters and their backstories some genuine weight to them, and you are won over by their individual charm so much that any thoughts about the actors’ real-life capabilities just goes right out of your head.

I honestly really loved this movie; it was funny, the characters were charming and likeable, it has a sweet message about experiencing love and sex, and it’s highly entertaining as a road-trip movie. I hope it does reach out to more people who want something good to watch at home or, in limited locations, at the cinema, because while Stage Mother – which I most recently reviewed – was also a likeable and feel-good movie, and will probably get a bit more attention primarily because it’s one of the few new movies showing in cinemas right now, this movie is seriously a lot better and deserves just as much of an audience. It’s a sweet, funny, empowering and all-around joyful little journey I was very glad to go on.

Come As You Are is a charming and sweet road trip movie that scores plenty of laughs, contains lots of likeable characters, harbours good messages about love and sex, and makes for a highly entertaining road-trip movie that deserves a far bigger audience than it’s sadly likely to get. For anyone who is curious, though, it’s a solid recommendation.

Want to decide what the movie’s like for yourself?
Check out Come As You Are streaming links
via