Color Out of Space (Review)

Color Out of Space (Review) 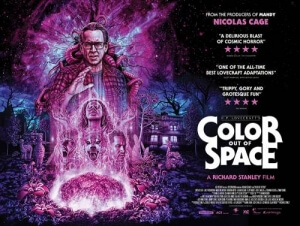 BASICALLY…: When a strange meteorite lands in a family’s backyard, it ends up having a catastrophic effect on all of them…

The last time that South African filmmaker Richard Stanley set foot on the set of a narrative feature, all the way back in the mid-90s, it did not end well. The director, who had previously left a mark with out-there thrillers such as Hardware and Dust Devil, was infamously fired after a few days of an already-disastrous production on the set of The Island of Dr. Moreau, after facing numerous run-ins with studio executives and the film’s stars Marlon Brando and Val Kilmer; since then, Stanley has stuck mainly to documentary features, presumably because his experiences on that film were so traumatic that it put him off fiction for a long while (then again, anyone who actually watched The Island of Dr. Moreau, with John Frankenheimer taking over from Stanley, would be put off fiction for a long while too).

Enough time has now passed for Stanley to finally step back into the realm of fiction, and he’s certainly picked one very out-there source material to work with this time around.

Color Out of Space, adapted from the 1927 short story by H.P. Lovecraft – the granddaddy of strange sci-fi horror – tells the tale of the Gardner family, comprised of father Nathan (Nicolas Cage), mother Theresa (Joely Richardson), daughter Lavinia (Madeleine Arthur), eldest son Benny (Brendan Meyer) and youngest son Jack (Julian Hilliard). They have recently moved from the city to a remote farm in the middle of the woods, where they spend their days breeding alpacas and growing vegetables, but one night they witness a glowing meteorite fall from the sky and crash-land in their garden. It soon becomes apparent that the meteorite, which emits a strange purple-ish glow, is infecting the plant life as well as the drinking water, which starts to affect the family in very strange, and increasingly disturbing, ways.

There is something admirably old-school about this film’s aesthetic, kind of like a stylish B-movie you would find from the mid to late 80s, from the psychedelic use of colour throughout to its effective use of practical effects which unsurprisingly end up feeling a lot creepier than modern-day CGI. It’s the kind of movie you could see getting a vintage VHS release sometime in the future – well, if vinyl records can come back in a big way, then surely VHS tapes can too – which you can go back and rewind to the freakiest parts like we all secretly did when we were children (at least, those born in the 80s or early 90s). Stanley takes a firm hold of his style, which isn’t afraid to get freaky and just a little bit insane every now and then, and it works to create not just an uncomfortable environment that just gets creepier and creepier with every growing development, but also a covert love letter to this era of B-movie filmmaking which most people nowadays wouldn’t have the guts to make, except for this guy.

What Stanley also does that makes the film tons of fun is that he paces the film in a way where we get to see that this family is already a little bit loopy, even before all the weird stuff kicks in. They’re definitely a family of eccentrics, not least of all because Nicolas Cage is amongst them (and who, by the way, has some glorious Cage freak-outs in this movie that will please any fan of the actor); the daughter, for example, is heavily into dark magic and speaks of it in a very pretentious manner that only a moody teen who thinks they know everything about witchcraft would do, while the eldest son is a pothead who likes to hang out with Tommy Chong’s landowner. It’s fun to see people who are already in their own way kind of crazy suddenly go even crazier, and this family goes off the deep end in ways that honestly need to be seen to be believed. There are some seriously messed up things that happen to these people, one of which will haunt your Cronenbergian nightmares, and Stanley allows us to enjoy it all while also being horrified at the same time, because these larger-than-life characters are quite unique and entertaining to be around as it’s all going down.

It’s got a good aesthetic and some fun moments of pure WTF-ness – and it’s really saying something when Nicolas Cage is not the craziest thing about this movie – but naturally, this movie is not for everyone. I can easily see people being turned off by its off-the-charts weirdness, and I wouldn’t blame them for a second, because there is so much insane imagery and ideas on display here that it would be hard for any audience outside of the niche crowd this was made for to get behind. For that reason, I wouldn’t necessarily recommend it to people I know, even though I did overall enjoy this movie; it’s weird in ways that I don’t think certain people will appreciate, and I honestly think it will confound them in the worst of ways. However, that is not at all to say that anybody can’t at least watch it out of curiosity; if you feel that you can stomach insane horror imagery and some truly out-there performances and deliveries, then by all means give it a shot, and whether or not you end up enjoying it you’ll at least be able to feel pride in trying something a little bit different than the usual fare.

Even though he’s been away from narrative filmmaking for nearly twenty-five years, Richard Stanley still knows how to make something that’ll put your imagination into overdrive. Just don’t ask him what it was like to work with Val Kilmer.

Color Out of Space is a trippy and entertaining adaptation of the short story by H.P. Lovecraft, brought to life by filmmaker Richard Stanley who puts great care into the crazy retro style and larger-than-life characters – including a delightfully over-the-top Nicolas Cage – but its weird nature is undoubtedly not going to be for everyone.

Want to decide what the movie’s like for yourself?
Check out Color Out of Space showtimes in London
via