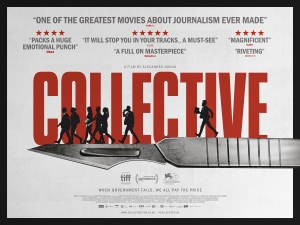 BASICALLY…: A group of Romanian investigative journalists uncover a vast health-care fraud in the wake of a deadly fire in 2015…

Twenty-six people lost their lives on the 30th of October 2015, when an electrical fault at Club Colectiv in Bucharest, Romania sparked a fire during a concert. While that is a major tragedy in and of itself, what is perhaps even more horrifying is what it would eventually uncover, from waves of political corruption and thuggery to the gross negligence of doctors who failed to uphold their solemn duties to those in desperate need.

Director Alexander Nanau’s all-access documentary takes the audience along the journey of this exposé into the Romanian government’s fatal mishandlings, in an unusually structured but no less insightful film that lays out the drama thick and thin in its constant reveals of one horrific thing after another.

The film plays out almost like an ensemble docu-drama, as we follow several figures who each play vital roles in the investigation, beginning with Cătălin Tolontan and his team of investigative journalists at sports newspaper Gazeta Sporturilor, who first broke the news that the 38 survivors of the fire who ended up dying in hospital were treated with diluted disinfectants, which did nothing to protect them from the deadly bacterial infections that would end up claiming their lives. Following the resignation of the Minister of Health, sympathetic patients’ rights campaigner Vlad Voiculescu is brought on board to fill the vacant position, and to also investigate the seemingly endless pit of corruption that allowed the previous system and its many perpetrators to thrive. We also briefly follow some of the survivors of the fire itself, including scarred model Tedy Ursuleanu, and how they are trying to cope with the loss of loved ones and even limbs in the wake of the tragedy.

Nanau’s film nixes traditional documentary staples, such as recorded interviews directly to the camera to further explain the unfolding situation, and instead goes for a fly-on-the-wall approach where the cameras record just about everything as it unfolds, from private meetings amongst the journalists to the endless amount of press conferences given by government officials. To some, it can seem rather dull; the lack of a solid go-to for the audience to receive clarification on the gravity of the situation, in addition to the slight repetitiveness of some scenes, doesn’t appear to provide the viewer with much reason to latch onto things as they probably should do, because it barely provides them with anything beyond just giving the facts to us straight.

Then again, much like fellow journalism drama Spotlight, the power comes from the most mundane of details. As we discover more and more just how rooted in corruption and shady dealings the Romanian healthcare system is, from doing business with mobster-esque hospital managers to knowingly receiving tainted goods and bribes from greedy businessmen that put patients at even more risk, the film reveals a disturbing pattern of behaviour that has been buried for far too long by those in power, and even more sickening is that nobody really seems to care about it. The cynicism of doctors, politicians and journalists towards some of these serious allegations is quite apparent as we see them up close and jaded, despite the growing number of whistle-blowers steering the investigation towards inevitable, but ultimately meaningless, findings. Even when unmistakable evidence of patient neglect is recorded on camera, such as a grisly shot of maggots gnawing at a patient’s unwashed burns, it barely makes the news cycle. Nanau and his cameras capture pure, unadulterated reactions from people who are presented with all the facts, yet do virtually nothing to combat them once and for all, and you feel the frustrations of people actually trying to do something about it like Voiculescu and Tolontan who keep getting stonewalled left and right by the very system that they’re trying to expose.

The odd structure may very well be a deal-breaker for a lot of people, because it doesn’t operate like typical documentaries which tend to analyse the situation more than just skimming the surface, but Collective is a fiery display of political and journalistic integrity on the line, using the factual findings of this investigation to show how rotten the system is to its core. It’s expertly shot, seamlessly edited, and does well to tell the unfolding story with as few traditional documentary stabilisers as it can, while also remaining a rather intriguing and encapsulating political thriller on its own terms. Though between the two I would rather re-watch Spotlight, this is still a fine example of investigative journalism actually doing what it’s meant to do and reporting on the things that nobody else can, or will, and putting it into an accessible enough film that doesn’t undermine its audience or even distil any of its own findings for the sake of simplicity.

If you’re interested in something a little bit out of your comfort zone, even if you’re already into hard-hitting documentaries, then I’d say give this movie a chance. You might find it a little strange and maybe a little detached to get into at first, but it gets infinitely more intriguing as it goes along, and you may well be left with a resounding sense of anger that this situation could easily have been controlled, yet it wasn’t because people can sometimes suck.

Collective is an intriguing documentary charting the investigation of corruption and healthcare fraud from within the Romanian government which led to the preventable deaths of dozens, which forgoes a more traditional documentary structure in favour of a fly-on-the-wall approach that lays out the facts at face value, captured expertly by cameras that chart every single, often shocking, detail.

Collective is now available on demand.