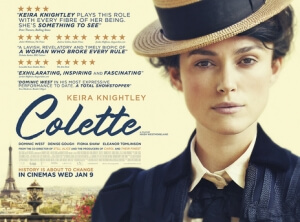 BASICALLY…: Sidonie-Gabrielle Colette (Knightley) fights for her creative freedom when her husband (West) passes her writing off as his own…

Keira Knightley is a great actress, but sometimes I wonder if she gets sick of being cast in so many historical costume dramas; she’s certainly made a career out of it, and has even been nominated for a couple of Oscars for her efforts in films like Pride & Prejudice and The Imitation Game, but like stabilisers on a bike there comes a time when you want to remove them from the equation and venture further without relying on them too much. All I’m saying is, she can – and has proven in the past that she can – do a little bit more than just wear a fancy dress and tight corset on-screen.

I like to think that Knightley thought those exact words when she signed on to star in Colette, a biopic on acclaimed French author Sidonie-Gabrielle Colette, and used her inner boredom with the costume drama to deliver a performance unlike any that she has yet given in this genre, one that fits perfectly with a character who wanted anything but to be conventional. It worked, as Knightley gives one of her most outstanding performances yet in a biopic that’s just as entertaining and fascinating as its lively lead.

We meet Knightley’s Colette as a young country girl in late 19th century France who falls for, and later marries, older family friend Henry Gauthier-Villars (Dominic West), an author best known as “Willy”. She is uprooted to a new Parisian lifestyle where she finds herself bored with the elitist crowd her new husband is more comfortable in, but soon makes a few friends of her own in wilder circles such as actors, writers and debutantes as the city thrives during the Belle Époque. Her big breakthrough comes when she writes a story about a young schoolgirl named Claudine, but Willy publishes it under his name when he begins to struggle financially, and soon Claudine becomes a major sensation; as a result, Colette slowly becomes frustrated with her husband receiving the credit for her work, and soon begins making her own plans to creatively flex herself and develop a unique, unconventional personality that would eventually make her more notorious than Willy.

Like most people going in to this movie, I knew absolutely nothing about Sidonie-Gabrielle Colette; I had certainly heard of some of her literary works (the Claudine books not so much, but she did pen the novels Chéri and Gigi which were both turned into major film adaptations, the latter of which won all nine Oscars it was nominated for including Best Picture), but absolutely nothing about her own story, the things she did, or her influence as one of the most celebrated French authors of her time. The film seems to be aware that Colette is unknown to a majority of audiences, and very wisely opts to focus more on her earlier years rather than her entire career as a whole, as a means to give us a glimpse into her vivid and wildly unconventional personality before then going off to learn more about what she got up to next. Think of it as Batman Begins, only with slightly more flamboyant costumes; an origin story of sorts that you’re invested enough in that you want to learn a hell of a lot more about this person upon leaving the cinema.

Director Wash Westmoreland co-writes this smart script, which also deals with themes of control and creative authorship as well as cleverly mirror modern themes of popular culture and franchising (the fictional Claudine becomes so popular that she begins appearing on everything from soap to cigarette cartons, and talks are even had about selling film rights to pioneering figures in the early days of the industry), and through his direction gives it a jolt of eccentric energy that’s fitting for an incomparable figure as Colette herself. He is also extremely fortunate to have an incredibly underrated actress like Knightley on board to perfectly bring her and her incredibly fascinating personality to life, and a compelling character actor like Dominic West to provide the film with an antagonistic figure we can both jeer against but also be charmed by his own persuasive charisma. The costumes are handsome, the cinematography is stunning, and it’s all from a fun script that lets us learn as well as emotionally connect with the characters and this story of liberation.

Colette is also a rather bittersweet project for Westmoreland; the film was co-written by his professional and personal partner Richard Glatzer, who very sadly passed away in 2015 due to complications with ALS. Having worked on several films with his late husband, most recently Still Alice which saw leading lady Julianne Moore win an Oscar for her devastating central performance, Westmoreland naturally flies solo on this one but keeps the memory of Glatzer alive with a sense of fun, flamboyance and furious passion that he would have undoubtedly revelled in taking part in. The film explores several exotic sides of Colette’s personality, including her growing attraction to female partners and, in one standout sequence, a sultry Egyptian dance number in the Moulin Rouge, which through a combination of Westmoreland’s tasteful direction and Knightley’s highly charismatic performance makes it feel like the director’s subtle way of reminiscing about the very best parts of Glatzer and putting them on-screen in the guise of this fascinating tale of liberation and creativity.

In that sense, the film is extremely heartfelt, but even if you took that away you’re still left with an entertaining and endlessly fascinating biopic that holds the spotlight on an obscure historical figure that is hidden no more.

Colette is an entertaining and fascinating biopic about the French author’s early years, held together by tasteful direction and an extremely charismatic performance by a fantastic Keira Knightley.