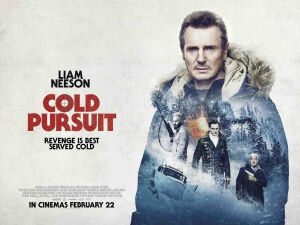 BASICALLY…: When his son is murdered, snowplow driver Nelson (Neeson) goes on a vengeful killing spree…

As impossible as it may seem for some of you right now, let’s cast aside any negative feelings you may have for Liam Neeson at this current moment in time; sure, all that stuff he said about wanting to kill a person of colour was ill-advised and pretty damn stupid, but we mustn’t let that publicity gaffe get in the way of the fact that his new movie, Cold Pursuit, deserves a write-up that doesn’t once take into consideration how the actor may or may not have had racially-motivated violent tendencies in the past.

Instead, you can watch a whole movie of Neeson going around and killing people as he’s known for doing nowadays, albeit in a very different and largely unexpected new approach to the tried-and-tested Liam Neeson revenge thriller, “different” in the sense that this film has a bit more of a sense of humour about itself than some of his other recent work, and when it works it works pretty well. However, I can also see this movie easily dividing audiences who may have been mis-sold by the trailer’s heavy implication of gun-based violence and good old-fashioned Neeson arse-kicking, and who could very well come out of this movie feeling a little confused by not exactly getting the movie they thought that they would.

The story sees Neeson play a guy named Nelson Coxman, a lowly snowplough driver in the quiet (and fictional) snowy Colorado town of Kehoe, whose world is rocked when his son is found dead from an apparent heroin overdose. When he learns that his son’s death may have actually been caused by some local gangsters, led by psychotic drug lord Trevor “Viking” Calcote (Tom Bateman), Nelson embarks on a vengeful crusade that sees him killing off several members of Viking’s inner circle one by one, and then getting rid of their bodies. Meanwhile, Viking becomes convinced that the disappearances of his men are being caused by a rival Native American gang led by White Bull (Tom Jackson), which ignites a turf war between both gangs while Nelson continues his deadly crusade.

The film is a remake of the darkly comedic Norwegian thriller In Order Of Disappearance, which starred Stellan Skarsgård in the Neeson role and was directed by Hans Peter Moland, who also directs this movie. Obviously, I can’t speak for how this movie compares with the original seeing how I’ve not seen it, but the remake does show some signs of there being a couple of things that might have been a little scrambled in the translation, from the often dry delivery of the comedy to some of the mannerisms and quirks you would normally see in a film of European descent (Neeson’s character Nelson is sometimes known by his nickname “Nels”, a reference to how Skarsgård’s name in the original was Nils which somehow doesn’t sound right when adapted into Western terminology). Again, I can very easily see audiences leave the auditorium not knowing how to feel about this movie, because it’s just not what they’re used to when it comes to early-year Liam Neeson action-thrillers; but at the same time, one can appreciate how this movie is setting out to do things very differently for what we usually expect from these kind of movies, especially with its grim sense of humour that adds a tone that’s very similar to a standard Coen Brothers movie. The film’s dark humour works best when it’s dealing with some of the larger-than-life characters, in particular Tom Bateman’s psychopathic drug lord who is chewing scenery left and right but having a blast while doing so, and when it’s marking a lot of the deaths with on-screen captions like how you would see them in the obituary section in a newspaper; the very appearance of one of these captions during an unexpected moment in a scene is enough to cause a few chuckles to come out of your body.

However, the film only intermittently scores some of these laughs, and the rest of the time you’re left not feeling so sure whether you should actually laugh at a lot of this stuff or if you’re meant to be taking it so seriously. This stems from the rather dry approach that Yorgos Lanthimos brings to his films, but whereas something like The Favourite is very well-written and extremely funny despite its more reserved direction, Cold Pursuit doesn’t really have as much weight to it in order to carry itself through a lot of the increasingly dark comedy. A large chunk of the characters, with the exception of Bateman’s villain who is by far the film’s biggest highlight, aren’t as well defined or fleshed out enough for you to care too much about what’s happening to them, and in some cases they offer so little in terms of actually moving the plot forward that you query why they’re even there in the first place (a couple of local cops, including one played by Emmy Rossum, are largely pointless distractions, while Laura Dern – who portrays Neeson’s wife – gets so little to do here that she just disappears from the rest of the movie before she can even make something of her nothing part).

I get the feeling that this is going to be a divisive movie for a lot of Liam Neeson fans; there are those who are vastly disappointed for its lack of action as promised by the trailer, and there are also those who will appreciate the different steps it was taking in order to separate itself from the archetypical Neeson action film. I understand both sides, but for me Cold Pursuit is a movie that certainly has its moments, but just left me with a rather chilly feeling afterwards.

Cold Pursuit goes out of its way to differentiate itself from the typical early-year Liam Neeson action movie, with mixed results; on the one hand it’s interesting seeing a different kind of action-thriller starring Neeson that has more of a dark sense of humour to it, with some comedic moments that do land, but on the other hand the film doesn’t have much else to support itself to leave much of an impression amongst certain members of Neeson’s fan base.