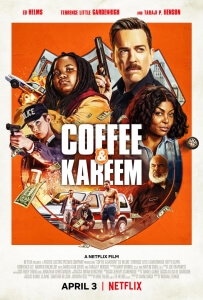 BASICALLY…: A cop (Helms) teams up with the son (Gardenhigh) of his new girlfriend (Henson) to take down the criminals that are coming after them…

Mel Gibson and Danny Glover. Jackie Chan and Chris Tucker. Tom Hanks and a dog. Burt Reynolds and an eight-year-old. Sylvester Stallone and his mum. Yes, there have been plenty of odd pairings in buddy cop movies over the years, and if nothing else Coffee & Kareem will make you want to watch any one of them instead (well, except maybe Stop! Or My Mom Will Shoot).

That’s because this new action-comedy offering from Netflix lacks the charm, wit, sophistication and the grace of many classics associated with the buddy cop sub-genre, and despite the occasional stand-out moment there isn’t much to this film that makes it as memorable as the dozens of movies it is clearly paying homage to.

It doesn’t take too long to figure out what’s going on; James Coffee (Ed Helms), a Detroit police officer, is dating single mother Vanessa (Taraji P. Henson), but is anxious about getting to know her foul-mouthed and streetwise 12-year-old son Kareem (Terrence Little Gardenhigh). The young boy, incidentally, is firmly against his mother’s new beau, so much so that he contacts local gangster Orlando (RonReaco Lee) to give him enough of a beating that he’ll hopefully stay away for good. Of course, things go south fast, and soon both Coffee and Kareem become embroiled in a criminal circuit that involves drug-dealers, dirty cops and – most frightening of all – Vanessa’s wrath, and the two of them must overcome their differences in order to survive.

All in all, it’s business as usual for an action-comedy buddy cop flick, but the lack of a fully original plot shouldn’t matter if there’s tons of fun to be had elsewhere in the movie. Sadly, though, fun comes in short supply here, because while the movie is relatively short – it’s just under 90 minutes – it feels a lot longer than it needs to because of the rather embarrassing lack of laughs. The jokes simply don’t land, despite the fact that none of the performers seem to be sleepwalking through this and are clearly injecting all of their energy into the physical and verbal comedy, but no amount of mugging or over-acting can truly cover up how stale and lame a lot of it can be. Having the characters constantly drop the f-bomb in every other sentence also feels like a cheap ploy to make up for the lack of actual jokes, many of them revolving around paedophilia and vulgar jabs at institutional racism in the police force; one extended gag about acting “gay” towards perpetrators is more awkward and oddly homophobic than it is funny, which again the constant bad language tries to make up for at every available opportunity, but gets very tiresome after mere minutes.

This isn’t even a buddy-cop film where you can at least admire the dynamic between the two lead characters, because all of both Ed Helms and Terrence Little Gardenhigh’s dialogue with each other consists of profanity-graced insults and awkward small-talk, to a point to where it’s completely unbelievable that they would form any kind of bond with each other in the middle of everything that they go though. There isn’t a spark between them like there was for, say, Nick Nolte and Eddie Murphy in 48 Hrs, which is made a little more sad when you realise the director of this movie, Michael Dowse, previously made last year’s Stuber which was also an action-comedy with a mismatched pair but had way more of a believable dynamic and relationship between its two lead characters than in this film. Because you’re not invested in their relationship or their banter with each other, you really don’t care if either one of them makes it out alive, or at least with their sanity still intact; for a movie called Coffee & Kareem, it’s shocking how much the two titular characters really don’t work all that well together.

That being said, the movie is not irredeemably bad; forgettable as hell, certainly, but still watchable because of a few choice additions that almost make the whole thing worth it. For one, the action is not that bad in this; it’s choreographed reasonably well, enough to where you can make out everything that’s going on, and some set-pieces – like a chase around a roundabout – come the closest to nailing the exact kind of silly but enjoyable tone this movie is aiming for. Also, god bless both Taraji P. Henson and Betty Gilpin in this; both are cast in roles that really could have been played by anybody, but they bring so much to the most nothing of parts that they deserve awards just for being the best part in mediocre movies such as this. Gilpin, who between this and The Hunt is really starting to build one hell of a screen presence, is by far and away the best part of this movie, playing her part hilariously over-the-top but in a way that’s actually fitting for what this movie is setting out to be; without getting into too many spoilers, she is having a blast being so unbelievably crazy, and the actress’s physical dedication to the part is so strong that you feel all her efforts are being wasted even more by a script that cannot compete with her.

It’s fine for a throwaway Friday evening film in front of the TV (because right now, what other choice do we have?), but if you want a buddy cop movie that’ll actually stick in your mind afterwards, you’d be better off viewing any of the classics that this movie is a mere decaf version of.

Coffee & Kareem lacks the strength and wit of the many buddy cop movies it is trying to pay homage to, with even the titular pairing not working as well as it should, but a few notable additions – hello, Betty Gilpin – shape it up as a watchable, but forgettable, throwaway flick.