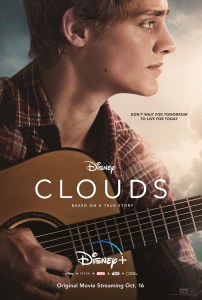 In 2013, eighteen-year-old Zach Sobiech passed away after a long battle with osteosarcoma – a form of bone cancer – but not before leaving behind a sweet, upbeat folk-pop ballad called “Clouds” which went viral and eventually garnered over 200 million downloads and streams. It’s the kind of unexpected success story that practically screams “Hollywood movie” at the top of its lungs, so a film about Sobiech’s life – named after the very song that gained him international attention – had to be on the cards at some point, and sure enough it’s finally here.

Acquired by Disney+ from original distributor Warner Bros, it’s admittedly rather strange seeing such an emotional teen cancer drama show up next to The Lion King and The Many Adventures of Winnie the Pooh on the family-friendly streaming service, but its wholesome and incredibly heartfelt tribute to its fallen hero surprisingly makes it a neat fit amongst that collection.

We are introduced to Sobiech (Fin Argus) well into his chemotherapy, the latest of several such treatments for his osteosarcoma; despite his illness, lack of hair, and his reliance on crutches to move about, Zach remains upbeat with a strong sense of humour, and is well-liked amongst his fellow students, including his best friend Sammy (Sabrina Carpenter) and dancer Amy (Madison Isenman) who clearly has a thing for him. However, an emergency surgery detects that the cancer has spread to his lungs, which effectively means he’s terminal; faced with his impending passing, Zach nonetheless tries to spend the short amount of time he has left to be with his family, his friends, and create an album of songs with Samy which soon gain the attention of major record companies.

The movie doesn’t veer into biopic territory until roughly the second half of the film; before its gets into Sobiech’s unexpected rise in the music industry, it’s an effective movie about a normal teen going through the unthinkable, along with the emotional impact it’s having on not just himself but those around him, from his devoted parents (Neve Campbell and Tom Everett Scott) to his close friends Sammy and Amy, and even Lil Rel Howery who shows up as Zach’s teacher in a much more subdued performance than the actor/comedian has put out so far. The strengths of director Justin Baldoni – previously of cystic-fibrosis teen romance Five Feet Apart – lie in his ability to not romanticise the illness he is going through, nor portray the lead figure as a saintly figure who can do no wrong; Zach is very likeable here, which Fin Argus’ charming performance helps to aggrandise, but he can also be somewhat insensitive to how other people are feeling, going so far as to push people away when all they’re trying to do is help him. Even still, Zach’s passion for making music and, in his words here, “giving the people what they want” is never lost on the audience, despite him getting noticeably sicker all the time, and the film ends up paying loving tribute to a clearly talented soul taken far too early from life, while also acknowledging that his path to success wasn’t always a bed of roses.

Although the book it’s based on seems to imply a more spiritual journey for the lead character – Clouds was adapted from a memoir by Zach’s mother Laura, not-so-subtly titled Fly a Little Higher: How God Answered a Mom’s Small Prayer in a Big Way – religion really doesn’t play a big part in this movie’s story. It’s only hinted at during a last-ditch family trip to the Catholic pilgrimage city of Lourdes, where Neve Campbell’s Laura hopes in vain that her son will be miraculously cured, and even then it doesn’t seem like Zach or most of his family are taking it that seriously (they jokingly refer to the city, and its hotel rooms where statues of the Virgin Mary watch over them as they sleep, as a “Catholic theme park”). It’s worth bringing up because, in an era where certain faith-based movies tend to appeal more towards right-wing crowds when basking in their religion, it’s nice to see one of these movies where the very notion of faith is not the defining feature of the story, instead letting it be about what it always should have been, namely the story of this young guy, dying from cancer, achieving his dreams before the inevitable happens.

The end results are rather emotional, with strong performances all across the board which help to give a noble and earnest portrayal of this guy’s story. To some, it may seem like an emotionally manipulative affair, but given how Sobiech’s story tragically unfolds, how could it not reach The Fault In Our Stars-levels of heart-breaking drama? Baldoni reigns things in well enough to stop it from venturing too much into melodrama, but he also recognises how severely sad the whole thing is, and through a fair mix of powerful acting and well-chosen dialogue in each of his scenes, he is able to let the audience feel sad without cynically counting on it, while also celebrating what the real Zach Sobiech left behind in both his musical talents and his warm spirit.

It’s among the stronger tier in the recent wave of teen cancer dramas, because it has a real sense of heart to it which carries you through the more devastating parts without feeling trite or contrived, and it is about an incredibly likeable individual who you really feel comfortable in supporting throughout, which leaves you on an uplifted note despite its depressing subject matter.

Clouds is a warm-hearted and incredibly likeable account of the life of Zach Sobiech, whose life was tragically cut short by osteosarcoma in 2013, in a film that celebrates his musical talents and admirable persona, whilst skirting around melodrama and opting for a more natural and uplifting approach to the devastating subject matter.

Clouds is now streaming on Disney+.