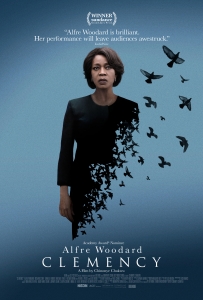 BASICALLY…: A death row prison warden (Woodard) must confront her demons when she has to execute another inmate…

As the discussion about race relations and legal injustices reaches a heated peak, one might argue that now is not really the best time to see a film like Clemency. However, to deny a viewing of Chinonye Chukwu’s prison-set drama would be to undermine its raw power, for while it trigger a couple of nerves with its heavy topics such as the prison system, in particular death row, all told with a predominantly African-American cast, the real focus is on the emotional effect it has on people that have to carry out this rather immoral procedure.

On that end, Clemency is quite the gut-punch that’s not the happiest of viewings, but is certainly a powerful glimpse into the lives of people operating on death row.

Alfre Woodard stars as Bernadine Williams, a prison warden at an unspecified compound where she oversees the executions of her inmates on death row. Years of witnessing lethal injections being pushed into people has toughened her up to an almost inhuman level; she is cold, almost robotic in her manners and attitudes towards inmates’ families and lawyers, not even switching off when she joins some of her work colleagues for an after-hours drink. Her cold nature has also affected her home life, with her husband Jonathan (Wendell Pierce) expressing grave concern for his wife’s emotional well-being, which is only amplified when he starts to push conversations about retirement. Everything unfolds for Bernadine as she prepares to execute her next inmate, Anthony Woods (Aldis Hodge) who was incarcerated for allegedly killing a cop, and who expresses hope of being granted clemency before he is due to meet his maker; as Woods starts to break down over the prospect of a bleak future, so does Bernadine.

It is a film that asks you to set aside personal opinions and focus instead on the drama surrounding the characters themselves; whatever you might think about the death penalty and its moral place in this world, it is hard not to feel some level of sympathy for some of these people whose lives are being destroyed by the very system they have become part of, in more ways than one. Bernardine, for instance, certainly has a very cold and calculated manner that someone in her position would very likely have anyway – and given the stuff she has to carry out, you’d need a pretty thick skin to make it through without breaking down – but you can feel that there is still a person somewhere inside there with real human feelings and some kind of compassion, even if it feels totally artificial at first. Woods, on the other hand, is someone who you can tell is trying their hardest to keep themselves together, but his impending execution is clearly taking a massive toll on his psyche – to a point where he even starts injuring himself by banging his head on the wall of his cell – and with time very quickly running out for him the one hope he has of being granted clemency, which even then is a very slim hope, you can just feel the optimism seep out of his as he begins to accept his fate. Chukwu’s script allows us enough time with these characters for us to understand what they are internally going through without demonising or lionising either one of them, in a smartly slow-burn fashion which makes you feel the weight of the situation while also leaving you to make your own assessment of an otherwise black-and-white system. Her direction also lends a quiet and moody tone which makes the rare bursts of pure emotion stick out all the more.

The performances, though, are what truly carry this movie, with Alfre Woodard in particular delivering a truly excellent turn as someone whose closely-guarded emotional barrier is slowly starting to crumble. She nails the coldness of her character’s profession, keeping a stern and straight face during some very difficult scenes; the film’s opening sequence involving a botched execution is harrowing for its stark realism, but even more so for Woodard’s ability to not even raise an eyebrow in a scenario where even the most composed of people would probably lose their cool. However, she is also not an entirely hollow individual, as she is seen to have a decent relationship with some of her work colleagues and her husband, although her connection to the latter is on a thin line due to the heavy nature of her profession which, again, is causing her to internalise a lot of feelings that are only now starting to surface. She is uniformly brilliant in this film, as is Aldis Hodge who has some passionate emotional scenes where he can draw a tear just from a look of shock and awe on his face as Bernadine coldly lays out the details of his own execution. He also shares an emotionally intense scene with Danielle Brooks as a former girlfriend of his who drops some unexpected news onto him in the form of a letter; though the scene gets a little bogged down with the descriptive dialogue, the performances of both Hodge and Brooks are strong enough to completely suck you into their drama, and maybe even leave you with a small lump in your throat during the process.

The quiet power of this film cannot be disputed, as it captivates you right up until the final shot, where everything just about comes to a head and leaves you feeling just as windfallen as the people on-screen. A smart, emotional and character-driven piece, Clemency is a strong piece of work that doesn’t deserve to be overlooked.

Clemency is a quietly powerful prison drama that smartly asks its audience to focus on the emotional angle instead of the political subtext, which provides some devastating drama that is only bolstered by some truly excellent turns by Alfre Woodard and Aldis Hodge.

Want to decide what the movie’s like for yourself?
Check out Clemency
via