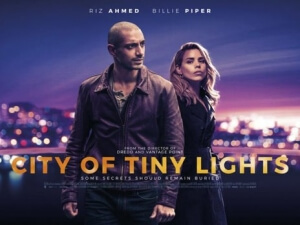 BASICALLY…: A London-based private eye (Ahmed) is put on the trail of a missing prostitute, but in the process uncovers some dark facts about his community…

It’s immediately clear what City of Tiny Lights is aiming to achieve from its opening moments: a grimy, neon-lit film noir that takes inspiration from the work of Raymond Chandler and other detective novelists, but placing it on the gritty, multicultural streets of west London. On the one hand, it’s cool to see this type of film be done again on the big screen, and with a slick new urban twist to it. On the other hand, though, City of Tiny Lights is not a particularly good movie as a whole, with an unfocused plot and questionable filmmaking choices that leave it a noble but ultimately unsatisfactory mess.

The film focuses on small-time private investigator Tommy Akhtar (Riz Ahmed), who ticks all the standard P.I. boxes from the small and stingy office to the constant appetite for booze and cigarettes, and who is assigned to investigate the disappearance of a Russian prostitute, but ends up uncovering a much larger conspiracy which involves local property developers, extremist Islamic youth groups, and unfriendly American secret operatives. A standard detective story, then, but littered throughout it are several flashbacks to Tommy’s time as a youth, where he got involved with his best friend’s girlfriend, and is still reeling about it in the present.

These flashbacks, and their soapy quality that wouldn’t be too out of place in an episode of EastEnders, struggles to fit with the rest of the noir-ish tone the film is aiming for, and it represents a fair amount of why City of Tiny Lights doesn’t really work. It wants to be the kind of detective film noir that helped make The Maltese Falcon and The Big Sleep into the classics they became, but also an urban street drama that deals with elements such as lost love – represented with an old childhood acquaintance of Akhtar’s played by Billie Piper – and multiculturalism. Neither of them go well together, because they feel so separate from one another that they don’t even tie into one another at any point, and it’s like there are wildly mediocre movies fighting each other for the spotlight. That makes it a rather frustrating sit, as you’re not really invested in the characters’ backstory or what eventually drove them apart, nor does the central mystery really suck you in as it becomes predictable and stale by the time it reaches the conclusion you had already probably come to way beforehand.

It’s baffling that this is from the same director who made Dredd, Pete Travis, because when you look at how that film was shot and edited, and then look at this film, you’d swear that in between films he’d lost his touch, big time. The whole movie is shot in that kind of shaky-cam documentary-style vision you would normally see in a grounded movie like this, but because of the film it’s trying to be – a slick detective film noir in the style of Raymond Chandler – it’s distracting and never creates a sense of gloomy atmosphere or hard-boiled sensibility to its surroundings. The way the camera moves and how some scenes are lit, it’s hard to even focus on what’s going on, and that’s not even touching upon the obnoxious slow-motion action scenes which make things even harder to make out (it’s like Jason Bourne crossed with Taken 3, never a healthy combo). Watching it, and knowing who the director is and what else he’s done, it really makes you want to go back and watch Dredd, and see how much more elegant, precise, and better-handled the cinematography, editing etc was in that film.

It should, however, be commended for going as far as it can with gathering a largely multicultural cast, made up of mostly Asian-British actors who look and feel as authentic as they possibly can, even with the weak material they’re working with. Riz Ahmed, an actor slowly on the rise thanks to roles in Rogue One and TV’s The Night Of, does fine work here but is playing such a charmless and uninteresting character that his natural screen presence can only get him so far. With him and other names like Roshan Seth and James Floyd, it’s encouraging to see a more diverse ensemble cast on the big screen every once in a while, but even so that doesn’t make it a good movie; it’s still a very large mess, one that fails in its ambitious mash-up of differing genres, and simply does not warrant any further investigation.

City of Tiny Lights has an ambitious desire to blend the detective film noir genre with a grimy urban London street drama, but the disjointed plot and obnoxious filmmaking choices ultimately squander that ambition with something that doesn’t work as well as it should, and makes it a mostly incomprehensible mess.