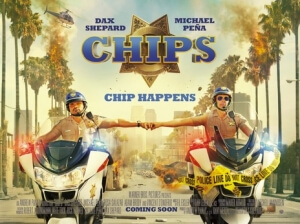 BASICALLY…: California Highway Patrol officers Jon (Shepard) and Frank (Peña) go up against criminals and corrupt cops who are causing havoc in the city…

Remember CHiPS, that cheesy cop show from the 70s and early 80s about a bunch of motorcycle cops in California? Of course you don’t, and neither do the people behind this big-screen adaptation, because this dog turd of a comedy has as much in common with its source material than the current President of the United States has with the majority of the common working people he claims to represent.

It would be easy to place the lion’s share of the blame on Dax Shepard, who not only stars but also wrote, produced and directed the film, but… actually, there is not “but” in this situation; this is Shepard’s baby through and through, and it’s an ugly, hateful, morally corrupt offspring that nobody in their right mind should ever want to hold in their arms, except for the very person who raised and nurtured it until it matured into something truly abysmal.

Here’s a basic plot rundown, and tell me if any of it is something you’ve seen many times over: Shepard and Michael Peña are a couple of California Highway Patrol cops, Peña being an undercover FBI agent (just go with it, it’ll be over faster), who at first don’t get along, stumble across a crime syndicate which they must then bring down when other authorities fail them, and along the way they form something of a bond while also encountering so many dick jokes, fart jokes, sex jokes, and more examples of the most low-brow humour you can imagine.

It’s pretty damn clear that Shepard just wanted to make his own version of 21 Jump Street, right down to it being a raunchier version of a classic TV show that hardly anyone remembers; the only thing is, he forgot to actually make it funny or intelligent in any way shape or form. This is the kind of movie that thinks jokes about sex addiction, gay panic, faecal matter, penises touching one another, and conversations about rim-jobs that feel like an eternity are enough to carry a movie, and they so do not; what Shepard fails to understand is that with a film like this, you can have raunchy stuff in it but you also have to have a notion of intelligence and charm to it all, which was what made both 21 and 22 Jump Street stand out in the ways they did, and you can’t just have the raunchy stuff on its own and expect it to be high comedic art. Instead, he has given his movie a kind of humour that isn’t funny but just crass, with a plot that really doesn’t make much sense even for a stupid comedy like this one, and characters that are just unlikeable douchebags and idiots, although Shepard was kind enough to give himself scenes where characters compliment his good looks, remark how beautiful his wife is (who, by the way, is played by his real-life spouse Kristen Bell), and in the case of several female characters just straight up want to bang him, except for scenes that call for  Peña’s character to receive no-strings-attached lady tokens.

Shepard’s ego seems to have also gotten in the way of his actual filmmaking abilities, because this film has some of the worst direction and especially editing in a comedy film for quite some time. Scenes will just end without much of a punchline, or if there is a punchline it’s one that is particularly weak, and some will begin with a set-up that feels like there was a whole scene missing just beforehand; there’s one where somehow Peña’s motorcycle has fallen over in a field and it doesn’t match the continuity of the previous scene, leaving it especially confused and messy. There is also one scene in the movie that is so poorly edited that it honestly defies human logic; when a character who had previously appeared in the movie shortly before suddenly enters, the film freeze-frames for a couple of seconds with the audio still playing before then cutting back to the scene we had previously saw them in to remind us of who he is, and then cuts back to the scene already in progress. When the editing in a movie is so bad you actually think the projector in the cinema had just suddenly stopped working, that’s a serious sign of filmmaking incompetence.

It’s not funny, it’s horribly constructed, and it’s made out of pure cynicism to try and cash in on the Jump Street crowd and not actually represent at all what its original source material was trying to be. This is just a horrible movie to pay and watch in any format, one that wastes talent like Peña, Vincent D’Onofrio as the throwaway villain of the piece, and even Shepard who with the right material can be pretty good, and one that seems to have a seething hatred of women, the law enforcement, sex addicts, male bodily parts, and the very TV show it is seemingly trying to represent on the big screen. It’s not like the original CHiPS show was worth paying homage to in the first place, other than maybe its of-the-time cheesiness, but they could have at least tried to represent it well, like how the Jump Street movies tried, how Starsky and Hutch tried, and even how Dark Shadows tried. CHiPS doesn’t try; it lazily takes your hard-earned money and throws up all over the screen before then defecating right in front of you, and then calls it a loving homage. “Loving”, this is not; it’s just horrible.

Please don’t see this movie, whatever you do, and just pray that the forthcoming Baywatch is at least better than this dreck.

CHiPS is a horrendous comedy that cynically uses the basis of the television show it is supposedly adapting to make as many low-brow forms of humour as it can with some of the worst comedic filmmaking in quite some time, while doing nothing funny or intelligent with its source material whatsoever.