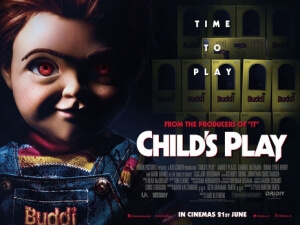 BASICALLY…: Young Andy (Bateman) receives a toy doll named Chucky (Hamill) for his birthday, but soon discovers that the doll is not only alive but has sinister intentions…

The Child’s Play series, featuring the evil Brad Dourif-voiced doll Chucky, has had a bit of a rocky history here in the UK – the third entry in particular was memorably linked to the brutal murder of James Bulger in 1993 when it was reported that the young killers were imitating a particularly gruesome scene from the film (a fact that was later disproven, after the police investigation concluded that they were in fact unlikely to have seen it in the first place), and most of the other movies in the franchise have largely gone straight to video over here, despite some of them gaining a theatrical release in the US.

While there doesn’t seem to be much of an appetite for killer dolls amongst us Brits, with the series being brought up in many arguments about the influence of violent movies and video games upon children, this new reboot attempts to win us back over the only way it knows how; by staging one entertainingly gruesome death scene after another, while not once taking itself too seriously (it is, after all, a movie about a doll that kills people, so you couldn’t do this movie with a straight face even if you tried). For the most part, it works; this is a rather fun revamp that fans of the series will enjoy just fine, and newer audiences will have a darkly amusing time with.

In this version of Child’s Play, Chucky is a doll from a popular line of “Buddi” dolls, which are essentially animatronic robots designed to wirelessly connect to several devices and serve as an all-seeing friend of the household. Chucky is adopted by young Andy (Gabriel Bateman), a hearing-impaired teenager who is given the doll as an early birthday present from his mother Karen (Aubrey Plaza), who in turn received it from an irate customer at the store she works at due to an apparent technical fault – as it turns out, his developer at a factor in Vietnam (one of many instances where the film takes a satirical jab at the hidden truths behind Western consumerism) disabled many of the doll’s safety features after being pushed around by his irate supervisor one too many times. At first, Chucky acts as an innocent and fiercely loyal companion to Andy, but when the doll’s more sinister side begins to show, as a means to both protect and appeal to Andy, the teenager must try and convince those around him, from his mother to friendly cop Mike (Brian Tyree Henry) who lives in the same apartment block, that his doll has become a psychotic and blood-thirsty killer.

If you think any of that sounds ridiculous, keep in mind that in the original 1988 movie, Chucky was “born” from a serial killer transferring his soul into the doll via voodoo magic – as you do – so, if anything, this new origin is a more believable reasoning for the doll to develop an evil streak. Though it is still a ridiculous concept, this one executes it in such an entertaining and unique manner that it not only stands apart enough from its original predecessor, but it also makes you forget about its increasing silliness because it’s so much fun to watch. As someone who’s vaguely familiar with at least the first three movies, there’s enough to this movie that doesn’t make it feel like just a mere rehash, a hole that so many other modern reboots of beloved horror franchises tend to do; the decision to make Chucky an animatronic doll in this one brings up some interesting conversation starters about our current obsession with modern technology and how sometimes it can lead to some very bad things, kind of like a Black Mirror episode with significantly more blood splatters. He’s also given a creepy new design, complete with hollow animatronic eyes that tend to stare into your soul (which is part of the impressive practical effects they used to bring this new Chucky to life), and a sinister new voice with Mark Hamill proving to be a chilling replacement for someone like Brad Dourif; he’s a character that can be scary as well as legitimately funny, and not just because of the very silly plot that it’s working with.

Again, though, the movie feels completely aware of how silly it is, and so adopts a more tongue-in-cheek approach in the wake of some of its more chilling and disturbing moments; sometimes, the tones can clash, but there are scenes that earn both the creepiness and the comedy so hard that you’re having too much fun to notice. The kills, too, are very well done; inventive, fun, and most importantly gory as hell, it’s hard not to squeal with sadistic glee as this evil doll has his way with victims who more often than not deserve exactly what’s coming to them. The violence is even played up for laughs sometimes; there’s a whole scene involving the cut-off face of one of Chucky’s victims that plays out like a sitcom, as well as a great moment during the climax that will give nightmares to anyone who’s ever been creeped out by costumed characters. It works well as a gory, unapologetically bloody horror film, but also as an unpretentious exercise in having fun with itself instead of taking things way too seriously.

It’s unlikely that this movie will cause quite as much controversy over here as the original series did, because there are far more important things going on right now in our society that are a lot more worrying than a movie about a killer doll; the fact that it’s actually quite a fun movie to watch certainly prevents it from similar bad-mouthing amongst audiences.

Child’s Play is a fun update on the classic, but controversial, horror franchise which takes on an intriguing new twist that introduces a very different but still creepy version of Chucky to audiences, while also giving us plenty of inventive death scenes and a sharp sense of dark humour to keep us thoroughly entertained throughout.

Check out Child’s Play showtimes in London
on Walloh.