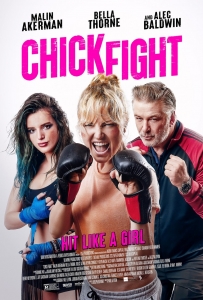 BASICALLY…: Anna (Åkerman) joins an underground female fight club, which she discovers to have a much more personal connection with…

A story about female fight clubs and such a fighter discovering the best version of themselves through it is honestly not a bad one. There is certainly potential to explore how punching and kicking can be as much of an outlet for women as it can be for men, and for better or worse Chick Fight does clearly have ideas about how it wants to show such a thing on-screen.

However, the movie doesn’t really reach its high goals and instead settles for a much more generic, predictable and surprisingly low-stakes sports movie which ultimately prevents the movie from being much of anything beyond another formulaic underdog story.

In the film, we meet Anna (Malin Åkerman) who’s more than a bit down on her luck; her coffee shop isn’t doing very good business, she’s struggling to pay her bills, and her mother has recently passed away from cancer. One day, her cop friend Charleen (Dulcé Sloan) introduces Anna to an underground fighting club for women to take out their aggressions on each other, which she soon discovers was founded by none other than her late mother; inspired by her surprising connection, and intimidated by undefeated fighting champion Olivia (Bella Thorne), Anna decides to step into the ring and fight as a means to regain her lost confidence. To do this, she relies on former boxing coach Jack Murphy (Alec Baldwin) – now an alcoholic barfly horrifying patrons with awful karaoke singing – to train her for an upcoming match against the aggressive and much tougher Olivia, which sees Anna finally coming out of her shell and realising her own worth.

Had this movie actually tried to incorporate a few more original ideas and approaches to its script, then it might have actually been something worthwhile. Instead, it’s simply a collection of tired sports movie clichés mixed with a much raunchier set of jokes that oddly make it a more uncomfortable sit, especially with some odd gay panic moments (Anna finds out that her father, played by former WWE wrestler Kevin Nash, is now dating a smaller, much more effeminate man after the passing of his wife, and her reaction is weirdly not entirely accepting) which, try as it might to make it not come across so outdated, still feel like this was a script written about twenty years ago. Beyond the fact that most of the material simply isn’t all that funny, even though it doesn’t fall as completely flat as something like Thunder Force, it’s a script that clearly wants to branch out and say something about female camaraderie and power – which are certainly strong, worthwhile messages – but is so stuck in a formulaic loop that it barely breaks free from the conventions of the typical sports comedy, something that makes it all the more difficult to stand out.

While the actors are clearly trying to inject some life into the material – Malin Åkerman’s an okay lead, Alec Baldwin is certainly having fun, and Bella Thorne is better here than she was in Infamous – it’s not exactly the kind of script that is saved by the liveliest of performances. Some of the actors are hopelessly stuck in token roles, like Dulcé Sloan as the typical sassy black best friend, saying lines that were clearly written by a white man and directed by another white man (rendering the film’s girl-power message somewhat false), which quickly becomes obnoxious and less endearing than it perhaps intends, despite a clearly committed turn by Sloan. There’s also a romantic interest for Åkerman, in the form of Kevin Connolly as a doctor who tends to the wounded fighters, only there’s very little chemistry between the two actors and it just feels like he’s only there so that the quota can be filled about having an unnecessary guy for the protagonist to be attracted to.

Perhaps the oddest thing about Chick Fight is how, despite setting up early on that Anna’s been through a lot of financial setbacks, the stakes really have never felt so low. The fights that she participates in don’t exactly come with a cash prize to solve her money woes, nor does it seem especially hard for her to make steps towards building back her life in the real world; near the end, she is literally handed what she needs to make everything okay again, without having to exactly fight for anything. The only reason we’re supposed to want to see her win, it seems, is just because she’s the main character, and aside from that there’s not that much reason to care since there appears to be not that much to really lose. Again, this could have been something where the writing and direction, had it gone down a much more unique and original path, could have stepped in to make this more exciting, but instead Chick Fight just doesn’t seem to want to do anything beyond sticking to what it knows, which is perhaps the most disappointing aspect.

It could have been much better, but instead it’s a bland, forgettable throwdown.

Chick Fight fails to live up to its full potential of exploring the underground world of female fight clubs by instead sticking to a formulaic script riddled with raunchy humour that misses the mark more than once, and settles for oddly low-stakes drama and flat characters despite some committed turns.