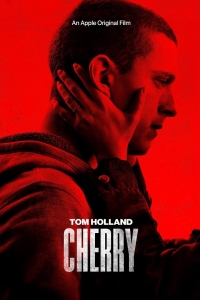 BASICALLY…: A former Army medic (Holland) with post-traumatic stress disorder turns to robbing banks as a means to fuel his drug addiction…

Fresh off of directing the highest-grossing movie of all time (or at least, until the end of this weekend when Avatar is expected to reclaim its crown, thanks to a China re-release), Anthony and Joe Russo have taken everything they’ve learned from Avengers: Endgame and transplanted it into an entirely different kind of epic. Reteaming with fellow Avenger Tom Holland – who the brothers introduced as the new Spider-Man in Captain America: Civil War – Cherry finds the Russo siblings exploring very different territory to the Marvel Cinematic Universe, and it’s as gritty and unflinching as you’d perhaps expect from such a radical U-turn.

Though the movie doesn’t seem to be getting great reviews from fellow critics, with a fairly low 39% rating on Rotten Tomatoes at the time of this review, I honestly didn’t think this movie was that bad. Flawed? Certainly, but by no means the train-wreck some are probably making it out to be.

Holland stars as our nameless protagonist, hereon referred to by his titular nickname Cherry – a fictional counterpart of Nico Walker, whose semi-autobiographical novel this movie is based on – who we first meet as a fresh-faced student at college, where he meets and falls in love with a girl named Emily (Ciara Bravo). When she decides to go and study in Montreal, a depressed Cherry enlists in the US Army as a medic, but after a long and traumatising two-year stint in Iraq, he comes home with severe PTSD. Like a line of dominos, that leads to him relying on prescription drugs to cope, which then leads to both him and Emily becoming hardcore heroin addicts, which itself soon causes Cherry to start robbing banks in order to fund their destructive lifestyle.

I’ll give the Russo brothers credit for aiming high with something smaller-budgeted but equally ambitious as their multi-billion dollar Marvel movies, as opposed to just doing another massive franchise blockbuster. Cherry is definitely as far away from that safety net as you can get, but their directorial style hasn’t wavered with the duo experimenting with lots of visually intriguing new camera angles, close-cut editing and even entire aspect ratios (for example, Cherry’s gruelling army training days are documented like they’re cut scenes from Stanley Kubrick’s Full Metal Jacket). It’s a very well-made movie, thanks also in part to Newton Thomas Sigel’s impressive cinematography which at times brings out the real ugliness in places like the Iraqi desert and darkly-lit junkie homes, while the filmmaking siblings themselves are clearly relishing in being able to show more harrowing scenes of drug addiction and war violence than they’ve been able to lately, even if sometimes they appear to be aping Danny Boyle’s style a little bit.

It is also a milestone performance for an ever-impressive Tom Holland, who delivers some of his finest work to date. It’s evident between this and last year’s Netflix thriller The Devil All The Time that he, too, is eager to branch out into darker and more adult roles than just simply swinging around and saving the day alongside Iron Man and other Marvel heroes, and here he delivers a powerful and oddly empathetic turn as a young man who’s clearly been screwed over by the system despite serving his country, in a performance so raw and unreserved that further proves his fascinating movie-star quality. Equally strong is Ciara Bravo who is central to some of the film’s most uncomfortable scenes revolving around their drug addiction – a brief overhead shot of her sitting in the bath surrounded by faeces is particularly unnerving – although at times, with her youthful looks and demeanour, it’s difficult to buy her as an actual adult, especially in later scenes where some choice make-up leave both her and Holland looking like sixth-form students participating in their school play.

While I felt there was enough carrying the film on its own, Cherry definitely has quite a few issues that keep it from being truly great. Most of it comes from its noticeably bloated running time; clocking in at two hours and twenty minutes, this movie tends to drag a lot in places, especially during its first two chapters which describe the main character’s rough experiences in combat. There are chunks of these parts which could easily have been trimmed off, and not much would have been amiss, and unlike Avengers: Endgame which very much earned its three-hour runtime Cherry often struggles to fill some of its emptier voids. The script by Jessica Goldberg and Angela Russo-Otstot (sister to the directors) also occasionally becomes overwhelmed by its incredibly busy story and far too flabby inner-monologues that feel like they’re lifted directly from Nico Walker’s book without much in the way of reformatting for the visual medium. When you break down this plot, it’s also pretty formulaic in how it portrays certain things like PTSD and drug addiction, and perhaps doesn’t portray these things as darkly as something like, say, Bret Easton Ellis’ novel Less Than Zero does.

Although the script perhaps isn’t entirely up to standard, it’s kept at a compelling high by the filmmaker’s ambitious filmmaking, Tom Holland’s top-notch lead performance, and the story which, formulaic and prolonged though it may feel, sucks you in to this guy’s messed-up existence. Cherry certainly isn’t a great film, but it’s also not 39% bad either; I would personally bump it up a little because I do feel that there is some really good stuff on display here, which just happens to be caught in some of its lesser elements. In any case, it’s not a film I regret sitting through, and it does leave me excited for what other post-Endgame material that Anthony and Joe Russo can come up with in the future.

Cherry is a mostly compelling drama which features some strong filmmaking by Anthony and Joe Russo as well as a career-best performance by lead Tom Holland, although the film occasionally feels the weight of its bloated runtime with a script that often struggles to contain its incredibly busy, if somewhat generic, story.