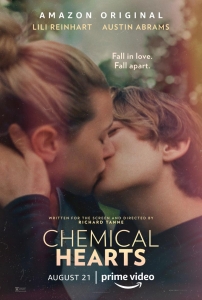 BASICALLY…: A high school student (Abrams) meets and become fascinated with a transfer student (Reinhart) with a devastating condition…

Early into Chemical Hearts, voice-over narration states that a platform is pointless unless you actually have something to say. It’s advice that oddly seems lost on the film itself, because it constantly goes through the motions of a typical young-adult romance story, without much on its mind other than what so many other coming-of-age dramas like this have said already.

There really isn’t a whole lot to say about this film, because it just is another one of these movies; not terrible, but not exactly inspired either, and always reminding you of much stronger films in this category that you could be watching instead.

In this particular tale, 17-year-old Henry Page (Austin Abrams) leads an ordinary teenage life, with a loving family and friends that care about him, and a passion for writing which makes him want to go for an editor position at his school newspaper. However, he finds out that he’s going to have a co-editor: that would be Grace Town (Lili Reinhart), a new transfer student who goes around with a walking stick, following a personal tragedy. Henry slowly becomes fascinated with Grace and her many secrets, eventually finding his way into her closed-off world, where he discovers things about her that threaten their growing relationship.

It’s a film that you could practically play YA Romance Movie Bingo whilst watching it, because it hits nearly all of the marks you’d expect – tragic backstories, teen awkwardness, long and portentous conversations about love and how the stars are made up of our ashes etc – and doesn’t attempt to stretch itself beyond its own limitations. The most shocking thing in this film is that nobody has a terminal illness à la The Fault in Our Stars, though it adopts the same tone and pacing as a movie like that, even when things aren’t necessarily as dramatic or as tear-jerking. Other than that, this movie plays it all too safe; even some emotional monologues about a friend’s suicide or overwhelming guilt about a certain tragedy feel restrained and not as provocative as it probably thinks it is. If you want a teen romance film that actually does take some big chances when it comes to certain themes and depictions of adolescent mental health, then All The Bright Places (which is, ironically, from the biggest competitor of this movie’s distributor, Amazon Prime Video) is a much more provocative and deeply emotional film than this.

The script plays things safe to a point to where it starts to cloud over some of the film’s actual attributes; for example, the acting is solid here, with both Austin Abrams and Lili Reinhart (the latter also serving as an executive producer on this film) delivering a couple of tender performances as they each experience heartbreak and other confusing emotions to the degree that they as reasonably talented young actors can. It is also a nice-looking movie, with some moody cinematography by Albert Salas which gives the film a rustic look that doesn’t just look like a mere Instagram filter.

However, not much of it matters when you’re not all that invested in the story or the characters, and the film is sadly lacking in both areas. It’s a thin plot which struggles to constantly find ways of spicing up the drama, even when the scene doesn’t entirely call for it, and the characters aren’t fleshed out enough to make them seem more interesting than the typical YA romance movie couple. Other supporting characters often get the short end of the stick, including one of Henry’s friends who gets a minor sub-plot about her feelings for another girl, and another Ed Sheeran-looking friend who never gets any sense of character despite us being told that they’ve been friends for years. It all ultimately leads to a conclusion that doesn’t so much land as it does suddenly come to a screeching halt, where not that many lessons are learned and you get the sense that hardly any of these characters are even going to remember any of this when they face real challenges later in life.

There’s really not much else to say about Chemical Hearts; it’s just another one of these movies, and a somewhat mediocre one at that. *sigh* Thank God that Tenet is only in a few days…

Chemical Hearts is a sub-par young-adult romance movie which plays it all too safe and doesn’t set out to be anything other than the typical coming-of-age drama it’s designed to be, but it doesn’t have much intrigue in its story or characters to set itself apart from the dozens of other movies like it.

Want to decide what the movie’s like for yourself?
Check out Chemical Hearts streaming links
via