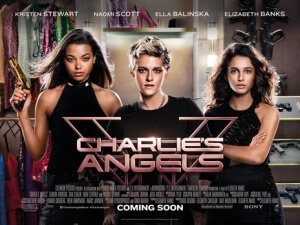 BASICALLY…: A trio of highly-trained agents (Stewart, Scott and Balinska) are called in to stop an imminent threat to the world…

Admittedly, it’s weird seeing this movie right after seeing Jay and Silent Bob Reboot, which continuously made fun of Hollywood’s current trend of rebooting everything to make up for the fact that they can’t come up with many original things anymore. But whereas that film was far more tongue-in-cheek and self-aware about its existence as a reboot, Charlie’s Angels just is one of those movies, doing exactly what the studio wants it to do by carrying on the brand recognition whilst also not being too ambitious with this newer version.

Sony’s done that twice this year alone, with not just this but Men In Black: International from back in the summer, and between the two it’s difficult to determine which one is superior; both feel equally lifeless and manufactured with filmmaking that suggests little passion on the filmmakers’ part and an overwhelming feel of studio control. Although, with this film, I can think of at least one or two things which prevent it from being the total disaster many are already claiming it to be.

Before that, though, a quick recap of the plot; the film, like the original television show and both McG-directed film incarnations, revolves around a group of “angels” working for the Townsend agency, run by an unseen figure named Charlie, which provides help and action for those in true need of it. On their missions, angels are accompanied by “Bosleys”, higher ranking agents who provide them with assistance, and who could be anyone from Patrick Stewart to Djimon Hounsou to Elizabeth Banks (also the film’s writer and director). On one mission, angels Sabina (Kristen Stewart) and Jane (Ella Balinska) quickly find themselves in danger when idealistic scientist Elena (Naomi Scott) comes to them with information about an energy source she’s been working on which can easily be weaponised, and along with Banks’ Bosley the three women must now stop the source from falling into the wrong hands.

Much like with Men In Black: International, there is a pretty generic plot on display here, complete with twists and turns you can easily see coming many miles off, and action set-pieces which seem mostly like afterthoughts instead of anything truly engaging. It is so much so that it even makes one nostalgic for the McG Charlie’s Angels films with Cameron Diaz, Lucy Liu and Drew Barrymore (though the latter scores an executive producer credit), because say what you want about their quality but they are at least memorable with their wildly campy and over-the-top sequences and characters. This movie doesn’t really have any of that, with the only memorable thing about the entire movie probably being Kristen Stewart, who seems to relish in the fact that she’s playing a rare comedic role, and is perhaps the only one of the entire cast to really inject some sense of life into the script. Practically everyone else is stuck with bland or uninteresting parts to play, from a script that unfortunately doesn’t do them many favours as it plods along being the cookie-cutter action movie it’s been manufactured to be.

I honestly don’t even blame Elizabeth Banks for any of this; she is a very talented actress, and while her previous film as director Pitch Perfect 2 wasn’t exactly outstanding by any means (especially so, given the fact that Mad Max: Fury Road came out the same week) it showed that she could direct people decently enough. The problem is, she’s working on a project that feels through and through like it’s a studio mandate; you can practically feel all of the script notes that Sony gave Banks sticking to your skin, all to ensure that their movie comes out as artificially constructed as possible with proper directorial vision more or less out of the way. Not to bring this movie up again, but it’s exactly like what happened with Men In Black: International where it barely felt like F. Gary Gray even directed it and was instead blatantly assembled by the committee at Sony Pictures, who were only concerned with delivering a product rather than something that actually could have meant something in this day and age.

That’s really the biggest disappointment with this film; here could have been a great chance to update some of the outdated gender politics that both the television show and the McG films unapologetically ran with, maybe looking at how the role of “angels” could be perceived in the era of Time’s Up and #MeToo, but instead it’s just another generic made-by-committee action movie that adds very little to the established order other than a committed comedic turn by Kristen Stewart. Other than that, there’s not much to this iteration of Charlie’s Angels that warrants an existence, and much like – last time I’ll reference this movie, I promise – Men In Black: International it will be quickly forgotten as more people remember the odd charm of the previous versions, because those were at least something resembling an identity.

Funnily enough, this is the exact kind of movie that Jay and Silent Bob Reboot warned us about, which can’t make it a coincidence that both are released the same week. That’s a fact that’s so meta it’s worthy of actually being included in that film.

Charlie’s Angels is a generic and oddly passionless attempt to reboot the series, which lacks any sense of personality or identity (other than perhaps Kristen Stewart’s committed comedic turn) and completely feels like a studio project rather than anything a filmmaker like Elizabeth Banks could have actually made work.

Want to decide what the movie’s like for yourself?
Check out Charlie’s Angels showtimes in London
via