Chaos Walking (Review) – Yet Another Bad YA Movie Adaptation 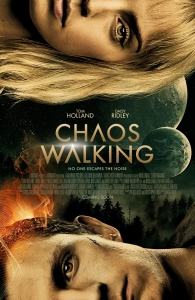 BASICALLY…: In a male-dominated future where men’s thoughts are constantly put on display, a young man (Holland) must protect a young woman (Ridley) who crash-lands on the planet…

Another year, another YA movie that’s years too late to cash in on the Hunger Games and Divergent franchises. Except, in the case of Chaos Walking, it really has been years; pre-production on the adaptation of Patrick Ness’ award-winning book trilogy started as far back as 2012, when several writers including Charlie Kaufman, John Lee Hancock and Ness himself all having a go at developing the script (only Ness is credited for the final cut’s screenplay, alongside Christopher Ford), before production finally commenced in 2017. The first cut of director Doug Liman’s film was reportedly deemed “unreleasable” by studio executives, but extensive reshoots – this time overseen by Don’t Breathe filmmaker Fede Álvarez – couldn’t take place until over a year later due to leads Tom Holland and Daisy Ridley’s commitments to their respective Spider-Man and Star Wars franchises, which repeatedly put back the release date by months and even years – and that’s even before the COVID-19 pandemic screwed up the schedule even more.

After all of that, I really wish I could stick up for it and give it some much-needed love following such a tormenting time in release-date limbo, but the reality is that Chaos Walking is actually pretty bad.

Set hundred of years in the future on “New Earth”, in a colony that is solely inhabited by men – who, incidentally, have somehow developed “Noise”, which is an ability to literally display all of their thoughts to the world – young Todd (Holland) one day discovers a young woman named Viola (Ridley), who has crash-landed onto the planet from a nearby spaceship. Todd is then assigned to protect Viola as they venture across the plains to signal her ship, all while being hunted by Mads Mikkelsen, the mayor of Todd’s colony who wants to capture Viola for… reasons (and that’s not me being vague; even after watching, I genuinely don’t know what this guy’s motivation is, other than he’s the villain).

That’s actually a really big problem with this movie; everything here from the plot to the characters to the world in and of itself feels so undefined that it’s difficult to make heads or tails about anything. Even without having read any of the books in this trilogy, it’s very easy to tell that a lot of backstory and character development was removed, because things will just happen without any build-up, characters will suddenly be introduced who we know nothing about and will continue not to know all throughout, and there will be so many questions left unanswered about how this future dystopia is supposed to work. Why have some humans settled on this new planet, whilst the majority have apparently elected to stay either on spaceships or elsewhere in the universe? Why is there even a “New Earth” at all, because it seems like the original planet some lightyears away hasn’t yet been fully destroyed, or at the very least uninhabitable? And are we supposed to believe that a society dominated entirely by men won’t suddenly be tempted into a raping frenzy at the arrival of a singular woman (not that I want anyone to get raped, of course, but it seems rather unlikely that these men would keep their cool as they do here)? I get the feeling that the books go into a lot more detail– in fact, I’d be shocked if the books are just as vague – because the movie certainly doesn’t offer any explanations that help us better understand this world, or anyone and anything operating within it.

That leads us to perhaps the biggest grievance I have about this film, which is the constant and extremely distracting use of the “Noise”. Every single scene involving Tom Holland or any of the male characters is accompanied by non-stop voiceover which often consist of short sentences and phrases that literally show us what they’re thinking (Holland utters things like “Girl!” and “Spaceship!” like he’s a mix between the dog from Up and the spaceman from The LEGO Movie), as well as some terrible purple-hazed effects that hover around their heads, and it becomes really, really annoying after a few minutes. You’re trying to focus on what’s happening in a scene, but you’re constantly distracted by all of these overlapping thoughts which make it extremely difficult to pay attention to some of the more important developments, and it’s something that you’re stuck with throughout the entire movie, which makes it all the more aggravating. Perhaps on paper this narrative device could be put to good use, but in a movie that needs to rely a lot more on visual storytelling instead of just being told everything that someone is thinking, it’s a fatal misstep that really doesn’t work.

It’s hard to care about anything in this movie, because the characters are extremely ill-defined, the story is far too complicated to piece together, and it’s all taking place in a world that really doesn’t make a lot of sense. Tom Holland and Daisy Ridley do what they can to work around the fudged material, as does Mads Mikkelsen who as always delights in a villainous role, but this is a severely misjudged and cynical attempt to once again rejuvenate the dormant YA genre, a fad which would have been dated if the movie had been released back in 2019 as originally planned.

Whilst watching Chaos Walking, my mind was thinking back to The New Mutants, another YA-themed movie which also went through a disastrous production process. Both movies are rather similar, from being about young people discovering certain powers of theirs, to clearly setting up future movies that will almost definitely never happen, but while The New Mutants wasn’t an especially great movie, it at least had a few things to it which I could admire from a creative standpoint, as well as its original intention to do something different from previous entries in the now-dead X-Men series. With Chaos Walking, though, there’s not even anything to admire beyond the odd acting performance; it’s an exhausting, clichéd, and thoroughly terrible YA movie that proves the genre needs to stay “unreleasable” for as long as it can.

Chaos Walking is a severely bad attempt to cynically revamp the dormant YA genre, with a script that fails to define any of its characters, plot or worlds, and runs with a fatally misjudged gimmick of having characters’ thoughts constantly on display, which makes the movie a lot more obnoxious and distractingly jumbled.

Chaos Walking will be available to rent on digital platforms, including Amazon Prime Video, from Friday 2nd April 2021.