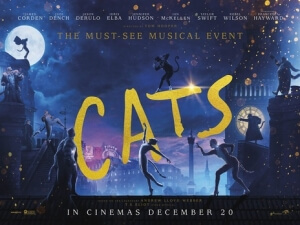 BASICALLY…: Over the course of one night, a group of cats meet to decide which one of them will be granted a new life…

How does one even begin to go about describing Andrew Lloyd Webber’s hit musical Cats without sounding clinically insane? It’s basically impossible, because there is so much craziness to unravel that analysing each and every detail about it would take you right up to Christmas Day, no matter what time of year it is. Yet, the musical is beloved by a lot of people who see it as a bonkers work of art, so it’s not really one’s place to look too harshly at it.

The movie adaptation, on the other hand, somehow turns something that was already crazy into a full-blown fever dream that’s at once hilarious and horrifying to witness. This is the kind of movie that leaves you wondering what in holy hell the filmmakers were on when they put this into production, and if you could acquire some of it because it looks like one hell of a high.

Just describing the plot – or what little of it there is – is a confounding experience. It’s about a tribe of cats known as Jellicle Cats, who meet once a year to vie for a place in the “Heaviside Layer” where they will be granted a new life by elderly cat Old Deuteronomy (Judi Dench). They prove their worth by constantly singing and dancing about their many attributes, from being a domestic pet to living on the railroad, all while another cat named Macavity (Idris Elba) uses magic to position himself as the de facto frontrunner. And that really is it when it comes to the plot – the rest of it is just leaping from one song and dance number to the next, with barely any consistency or flow to it whatsoever.

We haven’t even gotten into the fact that these “cats” are actually CG creations with actors’ human faces transplanted onto an anthropomorphic cat’s body, and the results are either terrifying or wildly unnecessary, depending on your reaction to that infamously downvoted trailer on YouTube. Although I personally didn’t find them as horrifying as a lot of other people did, I was always on the fence about the effects because 1) they’re really not very good, despite the clear time and effort that went into rendering them, and 2) spending so much money on creating artificial-looking cats when a stage version can put them in costumes and make-up for a fraction of the cost seems like a rather expensive mistake to make. In the film, the effects are better than they were in the trailer, but you still have to deal with a lot of uncanny valley with some of these designs – why on earth, as a major example, did they put boob-shaped mounds on the cat that Taylor Swift plays when none of the other female cats seem to have them? It stirs up so many questions about the sexual tastes of these animators that just thinking about them makes my skin shiver. I imagine that the CG will be instantly off-putting for many people who go to see this, and it’s not hard to understand why, but honestly the effects are not the weirdest thing about this movie.

This movie, right from the very start, is utter insanity. When you break down the bare bones of the plot, it’s about deciding who will be the latest sacrifice in a death cult. I know that not a lot of thought is required with a musical as profoundly silly as Cats, but it’s all that my mind could really think about, because there is not much else to suck me in to the movie. The plot, as thin as it is, still finds many ways to make as little sense as possible; there are barely any characters who aren’t solely defined by their incredibly ridiculous names; and the musical numbers, although intricately choreographed, are utterly nonsensical. The lyrics take inspiration from a collection of poems by T.S. Eliot, and you can certainly tell that a poet had something to do with this because the songs rhyme as though their lives depended on it, but a lot of the time the tunes are comprised of performers singing the same lyrics over and over again, which gets tiresome after a short while and makes you realise that there probably wasn’t much imagination in the writing room when they came up with these songs.

The way that it is filmed, too, only amplifies the madness. Director Tom Hooper, more so than his previous movie musical Les Misérables, overdoes the odd camera angles which rely heavily on fish-eye lenses and shaky handheld camerawork which plants you right in the middle of the action (which works for a gritty tale like Les Misérables, but not something as fantastical as Cats), which in and of itself is inconsistent and out of place. He lets his freak flag fly with musical numbers which incorporate everything from tiny cockroaches – also played by humans in distracting CG get-ups, which leads one to question how exactly this universe works when every animal appears to have a human face and human-like structures – to break-dancing (by cats who for some inexplicable reason wear trainers), and there is so much wackiness on display that it can easily become overwhelming, to a point to where you start to want to finally come down from this high sooner rather than later.

As for the performers, I can’t say that they’re awful or even that they’re good, because no actor in this movie has an actual character to work with here. Big-name performers like Jason Derulo and Taylor Swift enter the movie in grand fashion, only to suddenly disappear once their big number is up, almost never to return. Veteran actors like Judi Dench, Ian McKellen, Jennifer Hudson, James Corden and Rebel Wilson are all just playing wild variations of themselves, only with CG cat-fur pasted onto their bodies. Meanwhile, there is Royal Ballet principal dancer Francesca Hayward, making her acting debut as abandoned cat Victoria, who is undoubtedly a fine dancer but again has very little character to speak of, serving as nothing more than a wide-eyed audience avatar who, like us, goes from one crazy musical number to the next. Each and every cat in this movie could have been played by anyone and the effect would have been the exact same, so a lot of the rather starry names attached to this film are wasted in thankless roles that require them to sing and dance to some convoluted lyrics, and nothing more.

On a quick note, I do want to give a shout-out to Mark Aspinall, a friend of mine who actually worked on the film as an on-set music consultant, playing the music into the actors’ ears as they sang live on set, and even attending vocal sessions for actors like Judi Dench and Ian McKellen. Well done, Mark; as bat-shit as this movie is, the fact that you worked on a pretty major Hollywood musical such as this is pretty awesome.

It’s a shame that the movie is such a messy, incoherent and utterly insane experience that it leaves one nostalgic for the more subtle flare of The Rocky Horror Picture Show, which this movie is certainly set to become as big of a cult classic as that is.

Cats is everything you think it is, for better or worse (mainly worse); insane from start to finish, it wastes perfectly good actors in nothing parts, has a bare-bones plot that still feels hard to follow, and musical numbers which are impressively choreographed but become tiresome after a short while. Expect Rocky Horror Picture Show-style screenings of it in the near future, though.

Want to decide what the movie’s like for yourself?
Check out Cats showtimes in London
via