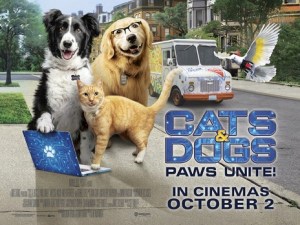 BASICALLY…: A cat and dog secret agent duo (Greenfield and Rauch) set out to save the world from a supervillain parrot (Lopez)…

I realise that in this uncertain climate, it’s slim pickings when it comes to distributors choosing whatever gets released in cinemas that isn’t a costly blockbuster, and the very business of releasing films is currently hanging on by a thin thread, but whoever in their right mind thought it was a good idea to put Cats & Dogs 3: Paws Unite! into cinemas (in the UK at least; it’s headed to a far more appropriate direct-to-video market in the States and other areas) seriously needs to be fired.

With the low DTV budget that is clearly has, and the almost inspiring levels of not giving a crap in both the filmmaking and the performances, this movie has absolutely no business being shown on a big screen. It’s bad enough that the movie is all kinds of terrible anyway, and we will very much be exploring why today, but to project it onto a giant screen reserved for films of much better, less insulting quality feels like the ultimate insult.

It’s important to point out that my negativity towards this film does not necessarily stem from my own nostalgia for the original Cats & Dogs from 2001, which I saw and enjoyed as a kid, and even as an adult there’s some things to admire like its cartoony action and some moderately impressive effects work for the time (I never saw the sequel, 2010’s The Revenge of Kitty Galore, but from what I hear about it, I’m probably not missing that much). Paws Unite!, though, barely even qualifies as a sequel, for it has none of the original cast or characters, none of the same creative team, and even the espionage aspect of the previous two films is severely downplayed. I would bet good money that this movie didn’t even begin life as a Cats & Dogs sequel; the filmmakers probably made this really dumb, cheap family comedy about pet secret agents, but then realised that a) it isn’t the mid-to-late 90s anymore, and b) Cats & Dogs already had this idea, so Warner Bros. decided to save face by rebranding it with the name of a franchise nobody has been interested in for at least ten years, and then quickly inserted references to the other films via blatant ADR to lazily connect it to them.

All of this is mere speculation, of course, but would it really surprise you if that turned out to be the case?

To get into the plot of this thing, it’s about a dog named Roger (voiced by Max Greenfield, whose clear contempt for the lines he’s reading out in the recording booth shines through in every aspect of his uninterested vocal performance) and a cat named Gwen (The Big Bang Theory’s Melissa Rauch, who likewise could not give two Shiatzus about this movie). They live in an apartment block with their respective owners, a couple of kids straight out of a Nickelodeon sitcom who consist of young tennis player Max (Callum Seagram Airlie) and aspiring musician Zoe (Sarah Giles), and secretly work for an organisation dedicated to preserving animal and human connections – the organisation, by the way, is called the Furry Animals Rivalry Termination, and in case you didn’t pick up on the acronym – which is, trust me, the peak of comedy in this film – it reminds us of it in every other scene. The cat and dog are soon called in to stop a dastardly cockatoo named Pablo (George Lopez, who depressingly is the only vocal actor who appears to be giving far too much effort), who wants to disrupt cat and dog relations so that humans will instead opt for alternative pets such as himself and his fellow pet shop brethren, and he accomplishes this by somehow hacking into Wi-Fi signals and smartphones, and emitting a frequency that can apparently work for any animal in the book. Did I also mention he has a robot dog armour that’s obviously a real-life French bulldog that they’ve alternately sped up and down to make it look more robotic in its movements?

Do you need me to go on, or have you already accumulated enough information to know that this movie is extremely stupid?

Clearly made for the under-five crowd – and even they deserve better than this – this movie only has an interest in appealing to the lowest common denominator with constant fart, poop and pee jokes, and zero regard for their intelligence with a plot that gets only dumber as it goes along, and effects that are so bad that they look cheap even for a direct-to-video production. The CG mouths they’ve plastered onto the real animals is pretty jarring, and there’s even a part where a cat’s head is, for whatever reason, entirely computer-generated onto the actual cat’s body, which simply looks horrifying. Then there’s the fake paws that are clearly being held off-camera by crew members to simulate things that should be physically impossible for any of these animals to actually do, like open a map or press some buttons; I’m sure with some training that a dog or cat can at least push a couple of buttons, but then again these animals appear to have been directed by a laser pointer because half the time they aren’t even looking at each other when they’re “talking”.

When you also factor in a painfully predictable plot with the lowest of stakes – the villain’s plan is apparently having a worldwide effect, yet we never leave the cloudy Seattle townscape other than stock footage with countries’ names plastered over them, so it leads us to assume that it probably doesn’t have as big of an impact as they’re telling us – and some bland, uninterested turns from actors both in front of the camera and stuck in the recording booth, you have a movie that is not even close to warranting a big-screen experience. If it had gone direct-to-video as it was originally supposed to, then this movie would have just flown by without anyone noticing; the fact that somebody at Warner Bros. decided that this was, indeed, worthy of a theatrical experience just makes the movie far more painful to sit through. Because of that, it’s hard to imagine anything topping this movie as one of the year’s worst, since it has the arrogance to occupy cinemas at a time when nobody is eager to release much at all, especially when its quality is entirely undeserving of any viewing experience to begin with.

Cats & Dogs 3: Paws Unite! is a DOA family “comedy” that doesn’t even attempt to connect itself to the previous two movies, instead opting for a far dumber plot on a blatant shoestring budget where nobody in the cast or crew cares whatsoever for the material, but it’s the arrogance of whoever decided this was worthy enough for a big-screen experience, at a time when cinemas and distributors are hanging on by a thread, that really propels it into the collection of the very worst films of the year.