At last, after what feels 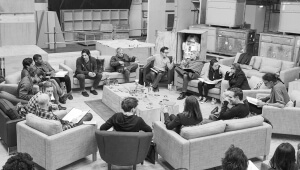 like YEARS of being on the edge of our seats, J.J. Abrams has finally gotten a cast together for Star Wars: Episode VII!

The players, as announced on official website StarWars.com along with everyone gathered round for a table read, feature names that have been heavily tipped from the very beginning as well as some newcomers who will no doubt have the world at their feet for their participation in the hotly-anticipated sequel to George Lucas’ two classic trilogies (yes, even the prequels).

The newest additions include:

Andy Serkis (Rise Of The Planet Of The Apes)

And returning to their very familiar roles are:

Harrison Ford (Raiders of the Lost Ark) as Han Solo

Anthony Daniels (Bakshi’s Lord of the Rings) as C-3PO

Abrams will be directing from a script he co-wrote with Lawrence Kasdan (The Empire Strikes Back), which itself was based on a draft by Michael Arndt (Toy Story 3). Kathleen Kennedy, the new head of LucasFilm after Disney’s purchase of the company in 2012, will produce along with Abrams and Bad Robot’s Bryan Burk. John Williams will also be returning to score new music for the film.

Are you excited for the newly-unveiled cast of Star Wars? Or are you disappointed enough that you’re pining for the days of Jar Jar Binks? Hopefully you don’t think the latter, but we at Film Feeder are pretty damn excited that a brand-new adventure in a galaxy far, far away is coming our way, even if it’s not until December 18th 2015.