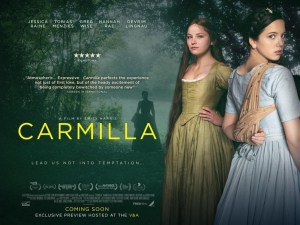 BASICALLY…: An isolated young woman (Rae) becomes fascinated with the mysterious Carmilla (Lingnau) when they strike up a passionate friendship…

Sheridan Le Fanu’s classic vampire romance tale Carmilla is considered a classic of gothic storytelling within certain circles, with its striking portrayal of a female friendship drowned in supernatural overtones, and has gone on to inspire numerous modern tales of vampires and forbidden love, among them – indeed – Stephanie Meyer’s Twilight series. In fact, author Bram Stoker is said to have been heavily inspired by Le Fanu’s story to create his own vampire tale, that of course being the classic Dracula.

However, Le Fanu’s story itself is in need of a post-modern reworking, something which writer-director Emily Harris is all too keen to do by stripping away any hints of other-worldly beings and laying bare a much more queer subtext – but the resulting film feels all too empty, and lacks a certain bite (ahem) that an aged story like this truly needed.

Harris transplants the setting from Austria to the English countryside, where a young woman named Lara (Hannah Rae) lives in isolation under the fierce watch of her strict governess Miss Fontaine (Jessica Raine). Desperate for companionship, Lara soon gets her wish when a nearby carriage accident brings a striking young woman named Carmilla (Devrim Lingnau) onto the premises, and despite Miss Fontaine’s attempts to separate the two girls, they soon form a special bond which slowly grows into something much more passionate, bringing about the wrath of a paranoid Miss Fontaine.

Having now seen two new adaptations of classic gothic literature in the span of a couple of days – the other being Ben Wheatley’s take on Rebecca – it’s odd because while Carmilla is more ambitious than Rebecca is in regards to its radical remixing of certain plot threads and themes, it’s also a lot less satisfying as a whole. Harris is clearly working on a limited budget here, which seems to prevent her from taking full advantage of her vision for the classic tale, relegating most of the passion and the intrigue to things left unsaid. That would be fine if the writing elsewhere was strong enough, but as it turns out when you remove something as significant as vampirism, you’re left with something that’s immediately a lot less interesting other than its doubling down on the queer nature of the characters, and even then the chemistry between the two girls isn’t given much time to blossom as it probably should.

The film is largely made up of scenes which ultimately don’t go anywhere, with supporting characters who could have otherwise been written out of the movie altogether; for instance, The Crown star Tobias Menzies shows up as a doctor, but other than performing his professional duties there’s no real reason for him to be a character in this at all, other than for Jessica Raine to have someone to confide in and, in a moment that springs completely out of nowhere, have intimate relations with. It largely feels like padding to pass the time before it gets to its ultimately miserable conclusion, which makes nearly all of the film relatively pointless; it leaves you on such an unfulfilled and anti-climactic note that you wish there actually were vampires in this version, because then at least it would have made for a lot more entertaining climax than what we actually get.

The performances are fine, and every once in a while there is a moody shot that calls back to the original story’s gothic roots, but this version of Carmilla does nothing to make itself known amongst the plethora of modernised version of classic stories. Its experimental removal of all things supernatural may make it an interesting project for hardcore fans of the original source material, but it doesn’t make things any more compelling for audiences who might not even have heard of Le Fanu’s story; if anything, this film makes me interested in reading it only to see how much more chilling and interesting it is than this, which can’t be that far of a reach considering it’s a fairly low-energy bar to raise to begin with.

It’s not worth wasting your time over; there are far more compelling queer love stories out there to check out instead of this disappointing experiment on classic material.

Carmilla removes the supernatural elements of Sheridan Le Fanu’s classic gothic story to punishingly uninteresting effect, with an empty narrative failing to make the remaining queer angle as truly compelling as it should be.