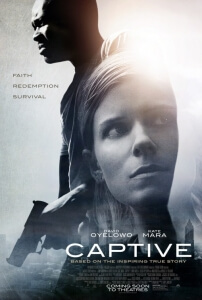 Since more than 70% of American religion is Christianity, it’s little wonder why US audiences have been endowed with endless movies about faith. Most of them, from what we hear (UK audiences have yet to experience this phenomenon), are not very good at all; the recent US box-office hit War Room is one of the most vilified films of the year with critics, and last year’s Kirk Cameron’s Saving Christmas won the most recent Razzie prize for Worst Picture. Based on those accreditations, we’ll take their word for it.

However, when a movie like Captive comes along to UK cinemas, one ponders if the Brits are getting the healthier offerings as opposed to the gristly scraps; and while it’s certainly not a great movie by any means, it should probably set the standards for the obviously-failing religious genre.

The film is based on the true story of convict Brian Nichols (played here by David Oyelowo) who, ten years ago, escaped jail before being sentenced for a rape charge and murdered four people, including the judge who was to be sentencing him and later an FBI agent. On the run from the authorities – represented mainly by Michael K. Williams’ Detective John Chestnut – Nichols invades the home of Ashley Smith (Kate Mara), a recovering meth addict with a desire to win back custody of her young daughter, and holds her hostage. From there, the film attempts to fill the blanks to show what may have happened leading up to Nichols’ eventual recapture (he is currently serving multiple life sentences without parole), including – and this is where the religious aspect comes into play – the reading of Rick Warren’s faith-based book The Purpose Driven Life.

Even then, however, the time dedicated to reading out loud the Christian ideals in this particular book is really not that much; we reckon it takes up less than 10% of the actual movie. The remaining 90% focuses more on the two characters interacting with each other and the police work that is going into finding and capturing Nichols. Much of that percentage is really not bad; not perfect, or even anything that great, but it’s probably far better than most other religious films that have come out this year. There are moments of genuine tension when Smith is first captured, and because we’ve seen how dangerous Nichols can be at this point – one of his first few scenes is of him beating a female guard into a coma – it’s made even more suspenseful because we really don’t know what he’s going to do next. It is genuinely intense for a good chunk of this movie, and it’s made even more so thanks to two very committed and strong lead performances; Oyelowo, shockingly overlooked this past awards season as Dr. Martin Luther King in Selma, does a great job in making his what could have so easily been a cartoonish bad guy into a three-dimensional criminal type, and Mara is just as good in scenes where she is simply terrified by the whole ordeal (which kind of makes us hate Fantastic Four even more, since it severely underutilised her obvious talents, and she’s one of the actual four, for Pete’s sake!).

There are only two major problems with the film, and sadly they are major. The first is that despite it being based on a true story, the story itself is very light and dramatically empty. What we described a couple of paragraphs ago is really the bulk of what happens in this movie, and the film tries hard to give scenes more meat and flavour without disrespecting the real-life events but it never amounts to anything that satisfies from a dramatic point of view. The only thing that really bonds these two characters, who otherwise have nothing much in common, are the words inside The Purpose Driven Life, which brings us to the film’s second biggest problem; when it comes to promoting the book itself, it is extremely shameless in its ploy. Again, the book itself takes up 10% of this movie, including a painfully blatant appearance by the real-life Warren in an archival clip from Oprah, but when it shows up it tries to force the book and its teachings down the audiences’ collective throats, and it’s really uncomfortable, especially when it comes at the end of a story where people actually died in real life.

Like we said, Captive is far from a perfect movie and isn’t even that great as a whole, but for what it is it certainly has its strong qualities to it, and should hopefully be seen as an example of how to do a religious movie much better than many other examples that have come and gone. Now THAT would be a miracle.

Captive definitely suffers from its heavy-handed religious overtones, as well as a light dramatic hook, but it is boosted by strong acting by David Oyelowo and Kate Mara and a tense focus on the actual real-life crime that inspired it.