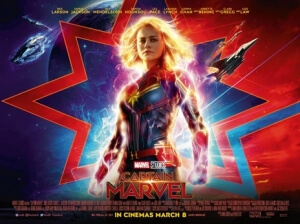 BASICALLY…: Carol Danvers (Larson) has her DNA fused with an alien Kree and becomes an extremely powerful warrior, but finds herself caught in a war between worlds…

The amount of online trolling that this movie has been receiving is disgraceful; it’s the exact same thing with the Ghostbusters reboot from a few years ago, and Star Wars: The Last Jedi, and just about any other major studio tentpole that just happened to have a woman in the lead role. This sort of heavy criticism – largely coming from before people have even had a chance to see the thing – only unmasks the rampant sexism from whiny, entitled fanboys who still harbour vastly outdated views on what a woman should be, and cannot for the life of them cope with the fact that a person of the opposite sex can have just as much a chance to headline a massive Hollywood blockbuster as a bloke.

A movie like Captain Marvel does not deserve such vile hatred online, especially from people that dare to call themselves “fans”, because the movie has a number of strengths that make it an entertaining, surprising, and overall solid new entry in the Marvel Cinematic Universe, regardless of whoever happens to be in the titular role.

Brie Larson plays “Vers”, a powerful warrior fighting for the noble Kree population across the universe, in an ongoing conflict with the shapeshifting Skrulls. Vers barely remembers her past, so when she is intercepted by Skrull leader Talos (Ben Mendelsohn) and has her mind probed, she is shocked to find evidence of a life previously spent on Earth, and after escaping from captivity she ends up crashing down to our planet – right into a Blockbuster Video store circa 1995, in fact – and sets out trying to eliminate the Skrull threat on our world as well as find out who she was previously. For her journey, she teams up with lowly S.H.I.E.L.D agent Nick Fury (Samuel L. Jackson), sporting hair, both eyes, and thanks to some top-notch CG de-aging work looks about as youthful as he did when he was in Pulp Fiction, and soon learns that she used to be US Air Force pilot Carol Danvers, not to mention that her cosmic energy powers came from a very unlikely source that also has her questioning what side of this particular fight she is on.

There’s a lot to get excited about with this movie, beyond just the fact that it’s the first Marvel film to be led by a woman; it’s the introduction of a hero considered to be one of the most – if not, the most – powerful in the entire line-up, and who is such a fan favourite amongst comic geeks that the very announcement of her name when this movie was first teased received a rapturous reception. As someone who never really read the comics, after seeing this film I completely understand the appeal of Carol Danvers; she is a very likeable hero, with charm to spare and a sweet, sparky nature that allows her to be mischievous at times but wholly dedicated to her craft. Larson plays her wonderfully, giving her character real depth and nuance that helps make her, despite her emotionless Kree upbringing, an extremely human figure who’s sympathetic and even inspiring. If reports are true that she is due to become the new face of the MCU following the events of Avengers: Endgame, then I am completely on board with her leading the way through a new set of films introducing a whole bunch of new and hopefully just as exciting heroes.

Larson has some worthwhile support from the likes of a fun Samuel L. Jackson, who she shares easy chemistry with in a partnership that’s essentially like a buddy cop movie, which in and of itself is pretty cool, and she also has some very sweet moments with Lashana Lynch, who plays one of Danvers’ Air Force comrades from back in the day, and who in just a few short scenes you really get what this character is feeling and thinking when she reunites with her best friend after so long. The real surprise, though, is Ben Mendelsohn; now, given his tendency to be typecast as the sneering bad guy in most big blockbuster movies nowadays including, but not limited to, The Dark Knight Rises, Rogue One: A Star Wars Story, Ready Player One and Robin Hood, you’d think that you know what to expect from his part here – but his character and the twists and turns they do with him ends up being the movie’s secret weapon, cleverly playing on your expectations and allowing the actor to do more with this role than the vast majority of villain roles he’s been cast in over the past few years.

Oh, and very briefly before I move on, Goose the cat is awesome. That’s all I’ll say about that for now, just go and see the movie to find out why.

As fun and enjoyable as the movie, and by extension its characters, largely succeeds at being, there are a couple of narrative bumps including a rather predictable twist involving a previously seen figure in our hero’s life, and the big third act battle – while visually spectacular and not without a handful of punch-the-air awesome moments – isn’t quite as exciting as the rest of the movie sets itself up being. However, it is consistently entertaining enough to keep you from being bored, and you are really rooting for these characters so much that even when the movie doesn’t always reach up to their level you can still at least enjoy being around these fun people.

It will not come as a shock – except to all those fire and brimstone internet trolls who criticised the movie before anyone even had a chance to see it – to learn that Captain Marvel is yet another winner for Marvel, but the real question now is if she has what it takes to take on Thanos in Avengers: Endgame; whether it’s her or Goose the cat who ends up doing him in, either way he’d better watch out.

Captain Marvel is yet another fun, entertaining and strong-willed entry into the Marvel Cinematic Universe, with a very likeable lead hero and set of supporting characters that help the movie overcome a few narrative bumps.