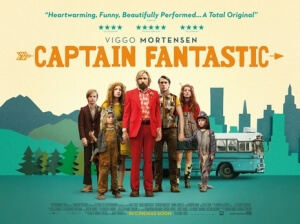 BASICALLY…: When he learns that his wife has died, Ben (Mortensen) and his many children, whom he has raised off the grid in the wilderness, set out on a road trip to her funeral…

Are you looking for a charming family film that fits perfectly within your bohemian and non-conformist view of the world? Then boy, do I have the film for you!

Captain Fantastic, which features no superheroes of the title whatsoever (I know, right? In today’s Marvel-saturated film culture, I’m shocked myself!), instead tells the tale of a passionate father and the bond he shares with his children. The twist, however, is that father Ben (Viggo Mortensen) has raised his six offspring in the wilderness, where they have been trained to hunt and gather food, brush up on knowledge of several advanced scholars and works of literature, and gain several outdoors skills that would make even the most dedicated of mountaineers look like amateurs. Unfortunately, Ben soon learns that his wife, previously admitted to hospital, has killed herself, and that her father Jack (Frank Langella) has forbidden him from attending the funeral, as he blames his son-in-law for her demise. Luckily, if Ben had obeyed this instruction, I wouldn’t have a movie to talk about, so he and his kids set off on the road to attend the funeral, where their wild instincts collide greatly with our more civilised, though far from perfect, society.

From that, you can probably see why I like to refer to this film as the hippie version of Little Miss Sunshine; though please don’t take that as a knock against this film. In fact, I actually think it’s a very strong, very funny, and even rather uplifting film that shows the importance of family unity, even in the most insane of situations as this one. From the very first scene, where eldest son Bodevan (George MacKay) hunts and kills a deer in a ceremonial rite of passage as his father and siblings look on, you can tell that this family works as a strong and loving unit, even if some of the things that we later see them do wouldn’t look too out of place in a much more sinister cult.

Though Ben is no cult leader, and instead shows a genuine amount of love and respect for his kids, he’s far from a perfect role model, and what I like the most about this film is that it doesn’t paint his extreme parenting methods as the absolute best thing in the world, as a more black-and-white version of this script would have likely done. It definitely shows some positives about it, such as the fact that his children are all more physically active and smarter than school-educated children they come across, but it also shows the downsides of raising them in such a way, particularly as none of them has any social skills whatsoever, which often leads to some cringe-inducing encounters along the way. In the end, it all comes down to deciding what the best way to raise these children is, and the main arc of the film is about finding a fair compromise that allows them to do what they have known to do all their lives, whilst also having the experiences that most if not all kids should go through. I found this to be a smart and thoughtful examination of how to best parent a child in today’s increasingly tech-reliant society, one that looks at the situation from all angles and doesn’t decide that his way is the one that truly matters.

Carrying this movie is undoubtedly Mortensen’s calm and collected performance that allows him to be caring, arrogant and extremely nonchalant, sometimes all at once – and yes, you DO get to see his “little Strider” at one point, in case you were wondering. However, even he can struggle to keep up with the naturalistic and energetic turns from his on-screen offspring, who all in their unique and quirky ways show a deft maturity and also a childish naivety that most uncivilised children, especially these ones, would exhibit. MacKay probably has the largest arc and thus the most material to work from out of the child actors, but they are all given enough moments of humanity and hilarity (watch the scene where Ben gives a far too frank explanation of sexual intercourse to his eight-year-old daughter) to become talents worth looking out for in the future.

The actors, the solid writing and direction from Matt Ross, and even the unconventional music choices from a rock version of Scotland The Brave to a soulful rendition of Sweet Child O’Mine by the cast, ultimately made Captain Fantastic a thoughtful, funny, sweet and pleasant movie for me to experience, and I hope you get the chance to see it too, so you can experience it for yourselves.

Captain Fantastic is a wonderfully thoughtful examination of modern parenting, which looks at the situation from all angles to offer a fair argument, and is also a fun, exciting, and often hilarious road trip movie that is anchored by strong emotional performances from Viggo Mortensen and his young co-stars.