Can You Ever Forgive Me? (BFI London Film Festival Review)

Can You Ever Forgive Me? (BFI London Film Festival Review) 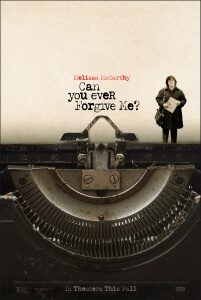 This review is of the cut shown at the BFI London Film Festival in October 2018 – the UK release date is currently listed for February 1st 2019.

I’m just happy that the only Melissa McCarthy movies I’ve seen this year weren’t Life of the Party and The Happytime Murders; thanks to the BFI London Film Festival, I’ve been granted a special look at a film that puts both those movies to complete and utter shame, while giving us a side to the actress that not many people have seen before which mercifully has nothing to do with unfunny pratfalls and swearing alongside felt puppets.

Can You Ever Forgive Me? sees McCarthy play Lee Israel, a struggling writer whose abrasive and unpleasant attitude has just gotten her fired from her job and left her with bills and rent to pay, as well as a sick cat to afford medication for. Upon chance, whilst researching for a biography on Fanny Brice, she finds a personal letter from the vaudeville star and tries to sell it off, but finds that she can’t get much from it because it’s not personal enough. That causes a lightbulb moment, which sees Israel begin to type up fake letters by Brice, Noel Coward and Dorothy Parker before then selling them to dealers for a large amount of cash, which she uses to pay rent and her cat’s veterinarian bills. Her one accomplice is her HIV-stricken gay coke-dealer friend Jack (Richard E. Grant), who begins to test Israel’s patience during several intervals – but that’s less to do with Jack himself, and more with how Israel cannot seem to form any kind of human connection due to her own bitterness (she admits that she broke up with her ex because she committed the appalling crime of wanting to talk about her feelings).

The film is not so much a depiction of the real crimes and misdemeanours that Israel partook in, but more of a deep dive into the fragile psyche of a person so entangled up in their own cynicism and bitterness that they themselves are their own worst enemy. It’s a fantastic showcase for McCarthy, who up until now has not been properly given the chance to flex her dramatic chops, especially in a role that call for her to have plenty of breakdowns and scenes of fiery anger when poked in all the wrong places. She is utterly captivating from her very first scene onwards, and commands every single scene with such a firm grasp that you wonder how and why she hasn’t done this many dramatic performances before. She shares some fantastic chemistry with Richard E. Grant, who is also fabulous as Israel’s flamboyant but no less compelling companion throughout her criminal dealings, and the quips she shares with her co-star are significantly funnier than anything from either Life of the Party or The Happytime Murders combined, because they’re actually smartly written and perfectly delivered with some fantastic direction behind it.

This is the second film by Marielle Heller, who previously directed The Diary of a Teenage Girl which I absolutely adored, and this is a great follow-up that tackles a very different subject matter in a dissimilar style choice, but nonetheless she delivers the goods in a very understated and compelling piece of filmmaking that really captures the gloomy and uninviting atmosphere that Israel has made an unruly nest within. There are scenes where we are right up in the faces of some of these characters, with their self-hating anger in full view that is at once fascinating but also heartbreaking, and it’s the combination of strong direction and some fantastic acting that these moments are effective in their simplicity. After I saw The Diary of a Teenage Girl, I remember thinking that Heller has such a radiant voice in cinema that I hope she finds more work because of it; and I’m so happy that not only is she now two for two, but because this film is already going over so well with critics and audiences – with some even calling McCarthy a lock for at least a nomination for Best Actress – I can see her voice being given to many more projects in the near future, which is always a great thing.

I also found the film to be a fascinating look into the life of someone who ends up basically selling memorabilia and forged autographs for a living; in the past, I went up to London a lot to meet film stars on the red carpet, and whilst waiting in the fan pens I encountered a lot of people who were there not because they genuinely liked the people they wanted to see, but because they just wanted their signature so they could then sell it on for a hefty price. It’s a practice I do not agree with, as you can argue it ruins the experience for real fans when they come up from behind and end up pushing their photos in front of your item for it to be signed, not to mention the fact that these people have such little else to do with their lives that they stand around outside all day, no matter what the weather, for a 50/50 chance they’ll actually end up meeting their target and then sell the item on for a quick buck. This film doesn’t necessarily touch upon that side of the dealer industry, but it does show in detail the greed of some of these people who would blindly accept this kind of memorabilia for whatever price is being asked, even though the item in question might not be all that genuine. Having come across so many unpleasant people like that in my time, I appreciated how seedy the film was portraying this business at times.

Overall, I did really love this movie; it’s a fantastically acted drama with nicely understated direction and interesting insight into a figure who did bad things, but did them in such a brilliant way that you almost forgive her for it.

Can You Ever Forgive Me? is a fantastically compelling drama about the life and times of Lee Israel, who is portrayed incredibly by a never-better Melissa McCarthy via understated and compelling direction by Marielle Heller.