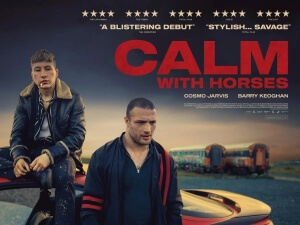 BASICALLY…: An enforcer (Jarvis) for a feared family of drug-dealers is torn between his responsibilities to the criminals and to his own family…

Family is a recurring theme throughout a lot of gangster films, whether they be the Godfather trilogy or Animal Kingdom or as recently as The Irishman, but Calm With Horses – the feature directorial debut of Nick Rowland – is a little more interested in exploring the psychology of being blindly loyal to such a unit. So much time is spent in these movies looking at the relationships between fathers and sons, brothers and sisters, husbands and wives etc, that nobody gives much thought to the people roped from outside right into their plays for power; the brutish enforcers, the obedient lap-dogs, the people who would otherwise lead a perfectly decent life were it not for the overwhelming criminal influence.

One of Calm With Horses’ many strengths is its ability to make you side with such a person, leaving you both disturbed at some of the brutish acts of violence they deliver to people as instructed, but also feeling great remorse for the fact that the good person they are deep down inside is slowly rotting away because of it. Powerfully told from start to finish, this is a character study that’s every bit as intense as it is heartfelt and extremely emotional.

Our main character is a guy named Douglas “Arm” Armstrong (Cosmo Jarvis), a former boxer who has become embedded in the lives of the Devers family, a drug-dealing clan in a small town somewhere in rural Ireland. He works for them as a violent enforcer, under the watchful eye of family member Dympna (Barry Keoghan) who acts as his minder of sorts, all while he also attempts to be around for his estranged girlfriend Ursula (Niamh Algar) and their young autistic son Jack (Kiljan Moroney). However, he is forced to contemplate where his loyalties truly lie when, after a family friend rapes the family’s 14-year-old daughter, he is asked to deliver a more conclusive method of violence for the first time.

It’s made evident from the very first time we see this guy, when he’s delivering a brutal but almost cookie-cutter level of violence against said family friend, that this is someone who barely has any control over his own needs and wants, all of which seem to be entirely dominated by the family he is employed by. They treat him as nothing more than a glorified attack dog, barking orders at him to do their bidding and even forcing them to take multiple helpings of drugs to make him wilder, all as a means to fuel his inner penchants for stone-cold violence and morph him into someone who simply cannot disobey his masters. So, when the inevitable moment comes where Douglas finally does decide to make his own decision regarding the main situation, it’s all the more poignant because it shows there is still a degree of humanity left in him, which further scenes of him spending time with both Ursula and their son also make abundantly clear. It’s a tricky tightrope to walk when it comes to character consistency, but Rowland and writer Joe Murtagh – who in turn adapts from the short story by Colin Barrett – do a fine job of making these developments feel natural to the character, as does Cosmo Jarvis who delivers a powerful performance reminiscent of both Marlon Brando in On The Waterfront and Robert De Niro in Raging Bull, and who certainly has the acting chops to match those acting giants if he so wishes in the future.

The movie, of course, isn’t always an easy sit, not just because of the violent methods of things getting done in this town, but also due to some of the disturbing and intimidating local figures, from Barry Keoghan who brings sadism but also surprising humanity to the protagonist’s minder, to Ned Dennehy as the family’s head honcho who always looks like he’s about to burst into a killing spree at any moment. They alone make the overall experience feel so uneasy that you’re almost expected to tiptoe around them to avoid seeing their worst sides, but things are balanced out by a glowing sense of compassion that Niamh Algar brings to her role, which also draws out the best in the Douglas character and proves to be a far healthier influence than the other family he unfortunately hangs around with. You can feel both forces – one by this criminal family, the other by his actual family – constantly pulling at both sides of this guy, and while it doesn’t take a genius to figure out which side ultimately comes out victorious (albeit in a more metaphorical sense), the film is paced well enough that you’re still intrigued by how it’s all going to play out, with the strong performances also lending a great weight to how these characters come off as more than just one-dimensional portrayals.

An invigorating watch, especially for anyone who enjoys a good and gritty crime drama, Calm With Horses hits nearly all of the right spots. Even though there are times when the thick Irish accents make the dialogue a little tricky to understand at first (though that might just be a personal thing), you still get enough sense of the story that makes it far more compelling and innovative than some of the genre’s lesser examples. As a debut feature for Nick Rowland, it’s a solid start which makes one curious about where he will take his career next, and for virtually every actor in this movie – particularly Cosmo Jarvis who, once again, delivers an astonishing portrayal of a lunk-headed but big-hearted brute – it’s a pretty strong calling card that sets them up for prosperous careers in the future. It’s worth checking out if you’re into this sort of film anyway, but there’s a great deal of humanity to this film that makes it a more commanding watch than you may think.

Calm With Horses delivers a powerful and emotional character study of a brutish gang enforcer that is more of a poignant character study than anything, which it delivers with strong and focused direction by Nick Rowland, a solid script by Joe Murtagh, and some stand-out performances across the board, from Barry Keoghan as an intimidating gangster to especially Cosmo Jarvis who really captures the pain and torment of his lead character.

Want to decide what the movie’s like for yourself?
Check out Calm With Horses showtimes in London
via