Call Me By Your Name (BFI London Film Festival Review)

Call Me By Your Name (BFI London Film Festival Review) 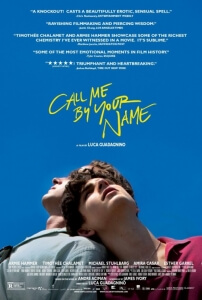 This review is of the cut shown at the BFI London Film Festival in October 2017 – the UK release date is currently listed for October 27th 2017.

If ever you’ve desired a luscious holiday to a beautiful sunny location, then it’s perhaps best you proceed with caution if your travel agent is Italian filmmaker Luca Guadagnino; not that it will be a terrible time by any means, but rather due to how he tends to fill his cinematic escapes to paradise with all sorts of drama, most of it provoking all sorts of emotions that perhaps one does not necessarily want to feel when sunbathing. From early erotic fantasies in Melissa P., to family discomfort in I Am Love, to an uncomfortable squabbling between friends and lovers in A Bigger Splash, Guadagnino tends to find the discomfort in the midst of the sun rays, and often pulls it off to luscious and desirable effect.

Now, his latest film Call Me By Your Name takes almost the exact opposite approach, creating all kinds of drama in a beautiful location but instead of showing the cracks in the surface, he fills them in with a passionate story about youthful love and self-discovery that has remarkably positive attitudes which make it hard for anyone to resist.

Taking place over the course of a summer in Italy during 1984, we are introduced to young Elio (Timothée Chalamet), the Italian-American son of a heavily-cultured set of parents (Michael Stuhlbarg and Amira Casar), and who we learn is an exceptionally bright and self-assured prodigy, well-loved by those around him and amongst his friends, including local French girl Marzia (Esther Garrel) with whom he shares a part-time fling. However, even he is caught off guard when a slightly older American scholar named Oliver (Armie Hammer) arrives at the villa to help Elio’s father with some research, and naturally both Oliver and Elio begin to grow closer to one another, until the burning attraction between them is too much to handle and they begin a passionate affair with one another.

As polar opposite as these movies may seem, Call Me By Your Name would make an excellent double feature with another recent gay romance, God’s Own Country; both movies take their time to establish the connection between the two lovers, exploring their flaws as well as their attributes, and once they eventually express their feelings for one another, neither film comes with any baggage that would ultimately bring it down or shame the lovers instead of leaving them be. It is encouraging to see queer cinema become more and more streamlined in the media, as it complements the growing appreciation for love of all kinds to be accepted in a more welcoming society, and with the recent rise of films like Moonlight, God’s Own Country and now Call Me By Your Name into the realm of critically acclaimed masterpieces, we can put ourselves at ease that the days of gay lovers being called out for their attraction by homophobic naysayers are coming to an end (although there sadly will still be people who feel this way), and that they can love each other on-screen without any major hindrances, other than the flaws that they carry as actual people.

In the case of this film, the central romance is glossed over by other supporting players – hell, it’s even encouraged by certain people – and so young Elio and Oliver have all the time in the world to explore their feelings for each other in the short amount of time they have together. Both Chalamet and Hammer are excellent in this together, with the former shining in what is sure to be a breakout role for the young actor, while Hammer uses his previously-established charm and charisma to wondrous effect here, and as the movie slowly burns towards a meaningful but bittersweet climax, you feel every single ounce of love that these two clearly have for one another, enabling a true connection with these two lovers that seems genuine thanks to the raw passion portrayed by both actors. Stuhlbarg, too, has an exceptionally powerful monologue near the end of the film, which is beautiful in both its writing – James Ivory, the director of Howards End and The Remains of the Day, co-wrote the screenplay for this, so it’s no wonder why it’s so poignant and romantic – and in the calm but emotional manner that Stuhlbarg delivers it, making his big scene a standout in an already lovely film.

Guadagnino, in all of his films, no matter what may be happening in terms of heavy drama always finds time to let the audience quite literally have their moment in the sun, and the beautiful cinematography by Sayombhu Mukdeeprom allows us to feel like we too are experiencing this amazing summer weather as much as the characters are. Watching this movie is feeling like you’ve gone on a particularly nice trip, and unlike other Hollywood movies that take place in a luscious landscape the location serves a purpose to the plight of the main characters, instead of feeling like they chose this place as a holiday spot and used the movie as an excuse to actually go there. From the numerous fields of green to the carefully constructed interiors of the villa where much of it takes place, there’s always something appealing to the eyeballs in every frame, easing the emotional transition in the central love story whenever it may happen.

It’s a gorgeous movie with an even more appealing sense of optimism and passionate love that’s hard to resist, making Call Me By Your Name a real treat of a movie for anyone seeking their next major getaway location.

Call Me By Your Name serves up a beautifully told love story with zero qualms about the central gay relationship, with the gorgeous cinematography and wonderful acting perfectly complimenting the genuine passion on display.