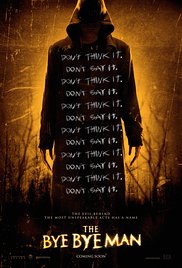 BASICALLY…: Some college students find themselves haunted by a mysterious figure known as the “Bye Bye Man”, who is known to possess people and have them commit mass murders…

It’s an unwanted tradition for there to be at least one crappy horror film released in January, aka the studios’ dumping ground. This year, it’s The Bye Bye Man’s turn to carry on that tradition, although this one comes with a little bit more of a fanfare than others, if only because it carries one of the dumbest titles for a horror film in recent memory. It’s a title that is so dumb, in fact, that people take one look at it and automatically think it’s not even a real film, it’s just the name of a fake trailer on CollegeHumour.com that’s meant to be a straight-faced parody of the horror genre. But since we live in a world where Nine Lives also turned out to be an actual movie, to everyone’s dismay, The Bye Bye Man does indeed exist, and it’s every bit as rubbish as you can expect from a movie with that title.

The Bye Bye Man is the name given to the central paranormal figure in the film, who is said to alter people’s perceptions of reality and manipulate them into killing other people, and the only way he and his awful-looking CGI meat dog companion seem to gain power is if people think and say his name, as referenced in the one phrase this movie seems hell-bent to turn into a catchphrase: “don’t think it, don’t say it, don’t think it etc”. He comes around to mess with a small group of good-looking college students that have such little to no definable personality that there’s no point in naming them individually, and as far as plots go that’s really all this film has to offer.

It’s about as generic and formulaic a plot as a typical film like this can have, with classic tropes like the large, creepy house that may or may not be haunted by the mysterious entity (on a side note, everybody seems to live in big gothic houses in this film, each one more oversized and creepier than the last – don’t people in this town just live in bungalows or apartments?), a quick online search that gives us more information on the mythos – via the popular search engine known as Search, because Google was apparently out of this movie’s budget – and a whole bunch of lame jump-scares that miserably cover up how not Scary the movie actually is. The movie doesn’t even have the decency to do any of these clichés competently, as the direction is pretty poor throughout and doesn’t even attempt to make the least bit of sense with every plot development that pops up. You’re basically watching a direct-to-video horror film that somehow got released into cinemas, one that doesn’t bother to add up any of its gaping plot holes, nonsensical decisions and ill-conceived attempts at frightening the audience because, y’know, it’ll be direct-to-video and nobody will really watch it, right?

Everything about The Bye Bye Man is dumb – yes, a film called The Bye Bye Man is dumb; who would’ve thought?! – and a complete waste of time, even for horror fans. The direction is poor, the acting isn’t very good, and the writing sticks to tired horror movie clichés that aren’t even fun to mock anymore; but oddly enough, it’s the Bye Bye Man himself who gets the shortest end of the stick, in a film that is named after the damn guy. Sure, we see him in the flesh and we understand what he does, but there is never an attempt to really understand his motivations, what his backstory is, why he’s suddenly decided to mess around with these dumb college students, or anything outside of his name and that he’s just kind of a ghostly prick. We get flashes of a train at night as well as a few wraparound segments set in the 1960s where he struck again, but these are never explored thoroughly to tell us a bit more about the thing we’re supposed to be afraid of. Now, I know that it’s sometimes better to keep things as much a mystery as you can, but there has to be at least SOMETHING we have to know about his motivations other than he’s creepy-looking and has a terrible CGI meat dog companion. For a movie called The Bye Bye Man, the Bye Bye Man himself is completely superfluous in his own film.

As if you needed it spelled out for you, The Bye Bye Man completely and truly sucks; another rubbish January horror film that nobody should see if they want a decent, scary flick to check out in the cinema. It turns out that when the film repeatedly chants “don’t think it, don’t say it”, it actually meant the film itself.

The Bye Bye Man is a rubbish horror film designed purely for release during the dumping ground January month, doing all the worst horror movie clichés poorly with unfocused direction, terrible acting, and a script that can’t even give us a solid reason why we should be afraid of the title character other than he looks rather creepy. Creepy it ain’t; it just sucks.