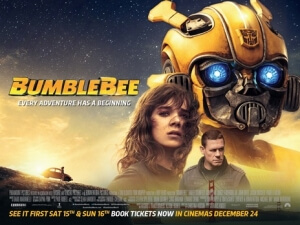 BASICALLY…: The Autobot Bumblebee arrives on Earth in 1987, where he befriends teenage girl Charlie (Steinfeld) and faces off against threats from both the humans and Decepticon scouts…

It’s taken more than ten years but at last, after five loud, bombastic and completely incomprehensible Transformers movies as directed by Michael Bay, a Travis Knight in shining armour has emerged to save the franchise.

The BAFTA-winning director of Kubo and the Two Strings – produced through Laika Animation, the studio he is currently president and CEO of as well as lead animator – now directs the series’ first spin-off focusing on the yellow Autobot Bumblebee, and both he and writer Christina Hodson have managed to finally bring the beloved Transformers franchise a true sense of heart and passion, as opposed to two-and-a-half hours of things blowing up, skimpily-dressed girls draping over the hoods of cars, and extremely childish ideas of how the world works. In short, thanks to Knight and Hodson we can now say that there is a legitimately good live-action Transformers movie out there, and it’s a reassuring instance of course correction that gives us all faith in this series for the first time in so long.

Taking place in 1987, young Autobot B-127 (voiced by Dylan O’Brien in the film’s action-packed opening sequence) makes his way from war-torn Cybertron to Earth, where a fight with a pursuing Decepticon robs him of his voice and his memory. He forms the disguise of a yellow Volkswagen Beetle, which catches the eye of teenager Charlie (Hailee Steinfeld) who finds the car and takes it home with her. When she discovers that she’s unwittingly picked up a giant transforming robot, she names him Bumblebee and befriends him as he hides from more Decepticon threats, who have teamed up with government agent Jack Burns (John Cena) to track him down and extract the whereabouts of other Autobots, including their leader Optimus Prime (Peter Cullen).

Bay only serves as a producer this time, and between this and A Quiet Place this might be the year where we’ve finally realised that he’s probably a way better producer than he is a director. He’s sacrificed all creative license and handed it over to Knight who gives the film a far more identifiable tone and consistency, and Hodson who actually lets the characters be normal people without being too obnoxious or unlikeable; thank goodness that Bay has made this sacrifice, not just because his Transformers films have gotten worse and worse with each passing film, but because it was becoming painfully clear that he has absolutely no love or passion for this particular source material in the slightest. This film was made by people who have a lot more love for the Transformers, as seen in an opening CG showcase where iconic characters appear in their original G1 forms (Optimus Prime, who isn’t in the film very much, shows up looking exactly like he does in the original cartoon, and we are even treated to an appearance by Soundwave who made no defining appearance in any of the other films), engaging in battles that we can actually make out what is happening, and for the first time in the past eleven years being truly heroic and not blood-hungry sociopaths like they eventually became.

Knight continues to steadily pace things even after we arrive on Earth, letting the emotion and our actual connection to the characters drive the action as opposed to just patriotic and overly-compensating declarations of their masculinity. Hodson, meanwhile, is smart enough to insert dialogue and mild drama into scenes of downtime where we get to know them more and want to root for when they’re in the middle of danger. Acting-wise, they’ve chosen a very capable lead in Hailee Steinfeld, whose character is basically the same as her one from The Edge of Seventeen only if she were also in a Transformers movie; luckily, it’s a role that Steinfeld can still excel at, and she uses that to give a solid performance here as well. John Cena is also a good bit of fun as the sort of machismo tough guy who if this were directed by Bay would undoubtedly be the lead, and even gets some of the film’s funniest bits of dialogue which, as we’ve seen from his previous comedic roles, is a mere walk in the park for this very talented comedy actor.

The movie adopts a story model that’s very similar – and in many ways identical – to that of E.T. and especially The Iron Giant, which if you know those movies you can expect the same kind of things to happen in this film as well, but it’s executed well enough that you honestly don’t mind sitting down to watch these clichés play out for you again; after all, it’s a hell of a lot better than the tired formula the series had been working with this past decade. It also unapologetically drenches itself in 80s culture, with several references to The Breakfast Club, The Smiths, and even Mr. T cereal (yes, that was a thing back then) which may put some people off because it does kind of whack you over the head with 80s nostalgia, but again it isn’t entirely bothersome, especially seeing how it has strong characters and sweet emotional moments to carry itself through anyway.

It’s a very likeable family film, which is what these Transformers movies should have been from the very beginning, but it’s heartening to know that they’ve finally managed to crack what made this series so appealing in the first place, even if it took them just over a decade to figure it out. Here’s hoping that this series continues to make its way up, and not drag itself down even further than where Bay left it.

Bumblebee is a likeable and much-needed course correction for the Transformers series which gives us strong writing, competent direction, good characters and emotional performances for the first time in the franchise’s troubling history.