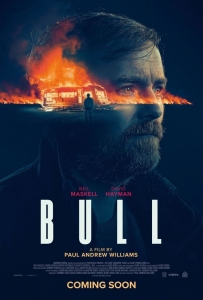 This review of Bull was conducted as part of the BFI London Film Festival 2021.

My experience of simply going in to see Paul Andrew Williams’ brutal and extraordinarily violent revenge thriller Bull was a little odd, because the movie I had just come right out of was the far gentler childhood movie Petite Maman. The images of young children playing together and forming adorable bonds were still fresh in my mind going into a film where nobody, not even the youngest kid, is safe from an onslaught of nasty retribution that is surely going to divide audiences.

Watching the actual film is something else, for not only are you captive for almost 90 minutes of gruesome torture and gory mayhem, but you have to endure watching horrible people do unspeakable things to people who are technically worse (that’s honestly debatable in this instance). You’ll either be along for the ride, or wanting to get off at the first junction; for me, while Bull is fascinatingly extreme in terms of every grim aspect you can imagine, it is also a rather fruitless one, for a lot of it feels like exploitative violence just for the sake of it, under a thin pretence that gets a little muddied the more it carries on.

The film opens with a man known only as Bull (Neil Maskell) shooting a man point blank in the back from a gun he borrowed from a man in a van. This is only the first violent act on his path towards retribution, and oddly enough the least bloody; everyone else isn’t so lucky, for people are stabbed and shot endlessly, knives rammed down their throats, entire families threatened, hands sliced off (and then harshly cauterised), and there’s even death by extreme funfair ride. All of this because Bull is a former gang enforcer, working for sleazy crime boss Norm (David Hayman) who is also his father-in-law, with Bull having married and fathered a son with Norm’s junkie daughter Gemma (Lois Brabin-Platt). Bull is now back for revenge against those who double-crossed him and left him for dead, and to also find his son who has since disappeared under mysterious circumstances.

The film’s structure takes us back and forth through time, going from Bull’s violent rampage of revenge in the present to when he was a mere goon chopping people’s fingers off, in a bit of non-linear narration that doesn’t always make itself clear as to when the current scene is being set. What is abundantly clear from the first few scenes onwards is that Williams is more than earning his 18 certificate with one gory death after another, sometimes to a point where it makes Michael Myers look like an amateur. Williams goes all in on the gore here, hardly ever letting up and letting every single audience member know that absolutely nobody is safe from harm. Bull requires a rather strong stomach to make it all the way through, and there were times when I was seriously close to looking away from the screen and the unforgiving brutality that was happening on it, so it’s likely that those more sensitive will seriously struggle with this one.

However, the excessive violence soon becomes not necessarily dull, but clearly masking a lack of further substance. When you break down the plot, it is a fairly straightforward gangland revenge thriller, but with the blood and gore of an 80s slasher film; it’s like if John Wick continued working as a deadly assassin instead of settling down with his wife and puppy. Eventually, the violence becomes the film’s only defining identity, along with its mean-spiritedness in how there is nobody that the title character will harm or threaten, while nearly everything else that should make a familiar plot like this at the very least compelling is pushed to the side in favour of more and more bloodshed. You get slight hints of what could have been in the central performance by Neil Maskell, who between this and Ben Wheatley’s Kill List can certainly play thuggish and intimidating mob enforcers down to the bone (though oddly enough, the only thing that Bull is missing is his character beating someone to a bloody pulp with a hammer), and who here turns the ferocity up to ungodly levels that can often be chilling in how cold and cruel he can be.

I can see this movie proving to be too much for a lot of people, because it really is an endless onslaught of grindhouse violence under the guise of a dark revenge thriller, though even in its final moments it can’t help itself by introducing an element which makes things even more confusing than they would have been had it not bothered explaining things. Like with Halloween Kills, there is a cautious entertainment factor in how violent it gets, but while Bull is perhaps a smarter and more focused movie than the actual slasher horror, it has the potential to divide people a hell of a lot more.

Bull is a ferocious and excessively violent revenge thriller that spares no expense in the gore and brutal deaths it has up its sleeve, although it soon becomes apparent that its exploitative nature is its one defining personality as it lacks significant other elements like story and character to work beyond the blood.

Bull will be released in cinemas nationwide on Friday 5th November 2021 (as of publication).