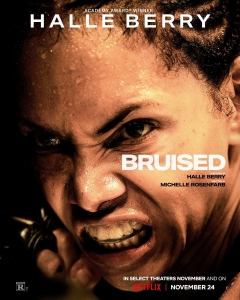 In the twenty years since winning the Best Actress Oscar for Monster’s Ball (which she is depressingly still the only woman of colour to have done so), Halle Berry hasn’t come close to recapturing the awards acclaim thanks to appearances in mediocre franchise fare and forgettable melodramas. However, with her directorial debut Bruised, she’s clearly eager to take another shot at the race, with a film that adopts a tried-and-tested formula with awards voters and a key central performance that’s certainly impressive in its utter commitment.

Unfortunately, neither Bruised nor its director/lead actress are likely to be catapulted into the awards conversation, because although Berry firmly commits to the role and the dark, gritty environment she’s setting it all in, her film is a collection of just about every tired sports movie trope in the book, not to mention a near-shameless attempt to work in hard-hitting issues for the sole purpose of impressing Oscar voters.

Berry plays Jackie Justice, a former MMA fighter who, since a humiliating defeat in the ring, has turned to rampant alcoholism and a toxic relationship with her abusive manager and boyfriend Desi (Adam Canto). After he sets her up at an underground fighting ring, Jackie earns the attention of an ambitious MMA league owner known as Immaculate (Shamier Anderson) who offers her the chance to reclaim her title as champion. Things get complicated, though, with the arrival of Jackie’s young son Manny (Danny Boyd Jr.), who she gave up for adoption as an infant and has been rendered mute due to the trauma of his father’s death, and so Jackie’s struggle to become a formidable fighter once more coincides with her learning to be a mother for the first time in her life. Which one will become more important to her? Well, what do you reckon?

Aesthetically, there isn’t anything that’s necessarily wrong with what Berry brings to the table here. As a debut director, she gets down and dirty, unafraid to go to some dreary, dark places that make for some truly uncomfortable viewing, while her lead performance is clearly embedded with a fighting spirit that hasn’t been seen in much of the actress’s work for some time. She tries her hardest to make the movie work both in front of and behind the camera, bringing a respectable amount of grit and realism to even the most hackneyed of scenes, even though her filmmaking style is much more in line with your typical shaky-cam indie flick than anything truly unique. Unsurprisingly, her experiences as an actress give her some formidable energy to direct her actors with, including standout Sheila Atim who plays Jackie Justice’s unconventional trailer (because in every sports movie, there has to be a trainer who doesn’t entirely play by the rulebook), which gives her extra clout as a filmmaker who’s just starting out.

The bulk of the problems, though, lie in the script by Michelle Rosenfarb. This is her first feature writing credit, and honestly you can tell that this was written by someone who’s all too new to the screenwriting game, because Bruised contains bucketloads of familiar sports movie tropes which are played completely straight. Everything from the down-and-out fighter seeking personal redemption, to the training montages, to a climax that’s almost beat-for-beat the same one from Rocky, is present and accounted for, accompanied by tropes you may normally find in your typical end-of-year play for awards success, whether we’re talking about the touching relationship between the main character and their traumatised child, rough scenes of domestic abuse, and even off-the-cuff revelations about past child sexual abuse which are shamelessly crowbarred in to an already tropey script. The familiarity of Rosenfarb’s writing makes it all feel much less sincere than it probably wants to be, because it never feels as though the film is being genuine when tackling such heavy themes, and more like they’re just throwing them in just to impress critics and audiences with how edgy and gritty it’s being. It’s a slightly cynical script in that regard, no matter how hard Berry tries to make it seem far less so.

If it’s a truly winning sports movie you’re after this month, then check out King Richard instead; unlike Bruised, it knows when to work in the right sports movie tropes and also feel genuine about its storytelling, because it’s not trying to whack you over the head with how grim and dour it is. This movie, however, is the kind of sports movie that King Richard was trying not to be, and you can see why because, despite Halle Berry’s firm commitment, Bruised is more concerned with how it’s going to rake up the awards instead of telling a good story in the best, most unique way possible.

Bruised may feature firm commitment by Halle Berry both as lead actress and as director, but it is thoroughly let down by a convention-heavy script that makes its strong ambition feel much less genuine and more like a cynical ploy for awards attention.

Bruised is now available on Netflix.