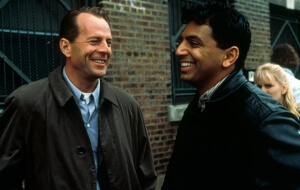 whose latest film After Earth tanked critically and commercially, making it the latest in a long line of flops including The Happening, Lady in the Water and the atrocious adaptation The Last Airbender.

You know who else didn’t have a good 2013? Bruce Willis, who not only scored career lows with appearances in G.I. Joe: Retaliation, RED 2 and franchise stinker A Good Day To Die Hard, but also became increasingly aggressive in press interviews and public disputes (his embarrassing turn on The One Show and his public falling out with Sylvester Stallone over payment on The Expendables 3 are just some of them).

It’s certainly been a rocky road for both men, a far cry from their earlier collaborations in The Sixth Sense and Unbreakable. So it might just be a ray of sunshine for both with the news that they are working together again on a new movie.

The project in question is Labor of Love, one of Shyamalan’s earliest screenplays that never made it to production until now. Willis will star as a widowed bookshop owner who, in an effort to prove his love for his late wife, starts walking across the country and attracts severe media attention. Think the running sequence from Forrest Gump, but with Bruce Willis instead of Tom Hanks.

Naturally, public opinion of both men’s professional careers is rather low at this moment in time. Could this be the project that lifts them both out of their developmental ruts, or will it once again damn them back to the creative abyss where they’ve been lurking all this time? We don’t know that yet, of course, but given it’s one of Shyamalan’s first screenplays – he wrote it in 1993, six years before The Sixth Sense – it could very well be that knight in shining armour. Let’s just hope they don’t mess this golden opportunity up…