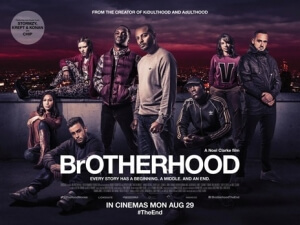 BASICALLY…: Family man Sam (Clarke) is forced to face his criminal past when it threatens those he loves, and resolves to cut the thread once and for all…

For the disillusioned youth inside all of us throughout the mid-to-late Noughties, there were the “Hood” films. The first, Kidulthood, was a grimy and often disturbing account of everyday life with a typical group of West London teenagers, which ultimately ended in a great tragedy that affected each and every one of them differently. It would also promote writer and co-star Noel Clarke to not just lead status but also director for the second film, Adulthood, which dealt with the repercussions of said tragedy from a more mature and edgier standpoint. For a while, everyone – myself included – thought that the journey was over, that Clarke’s anti-hero Sam Peel had gotten the bittersweet ending he deserved, and that things were neatly wrapped up which didn’t require there to be any more drama based around this one life-altering event.

“Not so fast,” Clarke was probably thinking when he decided to go into production on a third and final entry, eponymously named Brotherhood. “There’s just a little bit more story I reckon I can squeeze out of these characters to make another movie out of. I don’t care if it’s been eight years since the last one, people will still be interested in seeing it in 2016.” In fairness, he may have been onto something; the screening I went to was not only packed, but had a line positioned outside for the next screening which probably contained even more people. Sure, they were mostly of the young variety, but that doesn’t mean that people weren’t going out of their way to see this new entry. Who knows, it’ll probably do quite well at the box office (a fact which, if you’re reading this review way into the future, may have already come true), and luckily the film retains the edginess and rough attitude that made the first two films accessible to an entire generation, even though it probably has less reason to exist than the first sequel.

Clarke once again directs, writes, and stars as Sam, who is now living a quiet and uneventful life in the London suburbs with his girlfriend Kayla (Shanika Warren-Markland) and their two children, working a few part-time jobs to earn for his family. However, when his younger brother is attacked by someone from his past that still holds a bit of a grudge against him, Sam must once more manoeuvre through the dodgy streets of inner-city London to eliminate the threat before it hurts another member of his family.

It’s a very simple structure, one that tends to make it seem like one extended epilogue that we didn’t necessarily need, more than even Adulthood, but paints such a provocative portrait of inner-city youths that you can’t help but be fascinated by its ugly representation. This is a world where drugs, alcohol, sex, and dodgy nightclubs reign supreme with this youth, and what these films have managed to successfully do is to show its nastier side while also cautiously celebrating it, but never to a point where it states that this is the best way for anyone to live. Clarke makes it seem like almost another universe, one that makes you feel unclean as you’re watching the depravity unfolding in front of your eyes, but like the previous film it is all leading towards a much brighter future which makes all that unpleasant stuff have a point as well as a satisfying endgame.

That said, there were more than a few things that rubbed me the wrong way. The levels of female mistreatment in this film are absolutely insane – if a woman isn’t either naked or a prostitute, she’s screaming helplessly, or a cold-hearted wench, or a complete and utter moron – which honestly made me feel more uncomfortable than some of the more intense gang violence on display. There are also some stabs at humour (no pun intended) that don’t always land, and can sometimes ruin the tension of an otherwise thrilling scene (a recurring gag about Arnold Oceng’s Henry covering up his crime participation from his partner with an ongoing stint about a fictional Sainsbury’s loyalty card goes on for far longer than its expiration date), which I put down to Clarke’s apparent obsession with trying to replicate Quentin Tarantino’s quirky dialogue amidst a more serious scenario, but it doesn’t quite gel as much as he hopes. The film also dabbles in quite a few gangster movie clichés, from the vengeful figurehead to the sadistic henchman, and they can often take you out of the more realistic world this movie has spent three movies by now establishing, and remind you that you are just watching a film in a cinema, as opposed to experiencing something that could actually exist in reality.

However, I think Clarke manages to sustain enough tension to make Brotherhood a viable enough experience to watch, one that will undoubtedly satisfy fans of the previous films, and although someone like me can point out and have a problem with some of its more obvious flaws, even I can’t deny that these three films have brought out the wannabe gangster inside all of us, for better or for worse.

Brotherhood neatly ties up Noel Clarke’s trilogy to a mostly satisfying conclusion, and even though it contains one too many instances of unpleasantness – including an unhealthy amount of female mistreatment – the portrait it manages to paint of a delinquent urban city is so fascinatingly ugly that you can’t help but feel drawn into it.