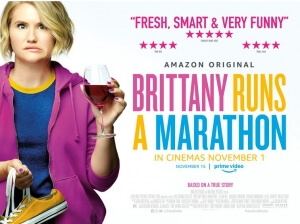 BASICALLY…: Brittany (Bell) starts jogging in an attempt to get fit, and soon thinks she has what it takes to enter the New York City Marathon…

If ever a movie existed that inspired you to get off of your sofa and go for a run, Brittany Runs A Marathon certainly fills the void. It’s a film that promotes the benefits of regular exercise, from its physical attributes to helping you towards a better mental state, and shows that even something as simple as jogging down a few streets can be the first step forward needed towards a better you.

As for the rest of the movie… it’s fine. There’s nothing really awful about it, nor is there anything really to it that stands out as much as its healthy message. It’s a completely serviceable film that has its heart in the right place, but doesn’t really sprint beyond that.

In the film, Jillian Bell plays Brittany, a woman who seems to lack proper responsibility in her life, whether it’s constantly getting drunk with her friends or hooking up with random guys at the club or being constantly late for her job. A trip to the doctor to hopefully acquire some Adderall results in the physician suggesting she lose about 50 pounds to better her health, so unable to afford the gym she begins running as a means of exercise. As she begins losing weight, making new friends – among them her well-off neighbour Catherine (Michaela Watkins) – and generally starting to feel better about herself, she soon feels that she is ready for the 26-mile New York City Marathon, and so begins her long road towards her ambitious goal, with only her pride and heavy inability to emotionally connect with others serving as hurdles she needs to leap over.

I hesitate to call it the female version of Run Fat Boy Run, for a couple of good reasons: 1) that’s a comparison that’s as easy as it is lazy, and 2) this movie has a little more going for it, even if it ultimately amounts to something that’s just “okay”. Director and writer Paul Downs Colaizzo – whose inspiration for the story comes from his roommate Brittany, who also trained for the NYC Marathon – certainly has a clear sense of what direction to steer the story in, and his script certainly has its heart in the right place (although not all the time, but more on that soon), but it just can’t quite shake off the tropes of the classic underdog story that this movie is just another example of. Many of the plot beats in this movie are fairly predictable, because they’re thinly-disguised versions of moments that have been done countless other times, and other elements such as a developing romantic sub-plot between Brittany and Utkarsh Ambudkar’s Jern feel like they’ve come directly out of a much different movie, which isn’t to say it’s bad but feels somewhat unnecessary in this particular story.

It wouldn’t be so much of an issue if the film were funny, or if the main character was worth caring about, and honestly both of those come up short. Though the film isn’t completely laugh-free, as there are a couple of funny one-liners here and there, the tone of the film doesn’t exactly call for chuckles by the minute, and the few genuine laughs that it does get from you are just light guffaws at best. In short, it’s not enough to carry you through the movie, and neither is the character of Brittany herself, who sometimes makes it very difficult for us to sympathise with her. There’s nothing wrong with having a protagonist who’s heavily flawed, but this character has issues which would make her a complete social pariah if she existed in the real world; she constantly refuses help from people who genuinely want to keep her on her feet, she closes herself off to any kind of emotional attachment to people she should be pretty close to, and she can be flippant and obnoxious towards those that tell her to get her act together. In one devastating scene late in the movie, she hurls mean-spirited comments to a plus-size woman who’s not even being unpleasant to anyone, and it was in that moment where I decided that this character is not worth caring about, even if she is drunk when she does it. Despite Jillian Bell giving what she can to the part, this character was just too much to handle, and by the time the big climax comes around I had very little reason to truly care about this person and what she was setting out to achieve, rendering much of the point of the film null and void.

Though it may sound like I’m leaning towards giving this movie a negative review, I should once more point out that I don’t think this is a completely bad movie, but I don’t think it’s a particularly great one either. Again, it’s a film that does have a sense of heart, even though some of it isn’t provided by the main character, and it fills you with a desire to go out and run afterwards which is certainly positive for your physical and mental well-being. If the movie had more of that going for it, as well as perhaps a stronger sense of humour and maybe a protagonist who wasn’t too difficult to root for, then perhaps I might have been warmer towards it – but Brittany Runs A Marathon, for me at least, just didn’t have the determination to make it all the way to the finish line.

Brittany Runs A Marathon has a sense of heart, which leaves you with the desire to go out and start running yourself as a means to boost your physical and mental health, but it’s overshadowed by familiar plot beats, a lacking sense of humour, and a lead character who’s very difficult to root for, which ultimately made this a very middle-of-the-road movie which is undoubtedly well-intentioned but isn’t strong enough to sprint towards a healthy finish.

Want to decide what the movie’s like for yourself?
Check out Brittany Runs A Marathon showtimes in London
via