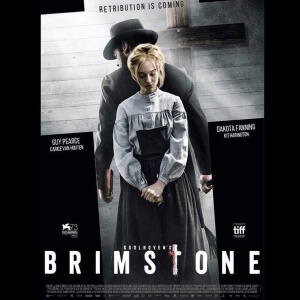 BASICALLY…: A young mute woman (Fanning) is hunted by a vengeful Reverend (Pearce), and must fight to survive for her and her daughter’s sake…

This review is of the cut shown at the BFI London Film Festival in October 2016 – as of this review, there is no UK release date yet for this movie.

Dutch director Martin Koolhoven isn’t pulling any punches with his latest film, the gothic Western thriller Brimstone. It is violent, sure, but it also touches upon some seriously uncomfortable character traits that he goes out of his way to not compromise for a larger audience. You get the feeling that he is in his element making something that he absolutely wants to make, without the interference of major financiers who might just want all that nastiness to be toned down just a little bit.

The film itself, although quite a long sit at 148 minutes, manages to defy expectations by also being a rather engaging watch as well.

Told in four chapters, with the first three being shown in reverse chronological order, the story begins as we meet Liz (Dakota Fanning), a young mute woman who lives a peaceful life as a midwife with a loving husband (William Houston) and two children. However, the arrival of a scarred Reverend (Guy Pearce), whom Liz instantly recognises from her dark past, sends her and her family on a journey of survival from his vicious threat. The following two chapters thoroughly explore Liz’s past connection with the Reverend, and the revelations that emerge make the battle for survival all the more terrifying and sinister.

Even for such a long sit as this one was, I was thoroughly engaged with this story and how it was being told. Starting off roughly about three-quarters of the way in might seem like a rookie mistake by someone who might have seen Memento and Eternal Sunshine of the Spotless Mind a few too many times, but Koolhoven is smart in that he gives the audience a situation, and then spends the middle chunk going further and further back in time to give us even more details that explain the context of it all, with each new discovery being more unexpected and disturbing than the last. By the end, once you have all the necessary pieces in place, you are able to choose your side and become desperate to see that this incredibly sympathetic young woman gets the retribution that she deserves.

Though in fairness, that might just be down to Fanning’s truly remarkable performance here. The former child actress’ roles have been either scarce or seriously undermining her talents in recent years, but this is a part that allows her to finally flex her range more than anything she has done since reaching adulthood, an even more impressive feat considering she was a last-minute replacement for original actress Mia Wasikowska. Spending half the movie as a mute, her character uses sign language to communicate, which allows for a lot of facial expressions that really dive into her past torment and her current sense of danger, all of which Fanning expresses beautifully here. This is absolutely Liz’s story, from beginning to end, and Fanning makes it work right from the start as someone you absolutely want to see win in the end. A brief special mention must also go out to young actress Emilia Jones, who has a pivotal role as a young woman named Joanna that has a major connection to Liz, and who also exhibits a quiet fierceness that also compliments her scared and weary persona.

Meanwhile, on the opposite end of the spectrum, there’s Pearce as the menace that is haunting Liz all throughout the movie. Although Pearce is effective, I must admit that I have mixed feelings about this character of the Reverend; on the one hand, he is one of those villains who you really grow to hate as the movie goes on, and in that sense he’s definitely a very effective villain, but on the other hand he is written to be so one-dimensionally evil in places that it doesn’t seem like he’s a real person that could exist in real life. Don’t get me wrong, by the end you are practically begging for Liz to take her revenge against this absolute monster, but as the film goes on we get to see how this guy has little to no remorse in his heart, a man so consumed by scripture that he has warped it to fit his own twisted habits, always finding a way to justify it as being the word of the Lord. He is very much a movie villain, one that is so irredeemable and morally reprehensible that you just want to reach into the screen and beat to a bloody pulp, although that comes at a price, since because he is so nasty and doing things that would certainly take him out of the running for Reverend of the Year, it’s impossible to see this kind of person exist outside the filmic world he exists in, and some of the intensity is lost when we can’t connect him to any other kind of reality.

But maybe a character like that is meant to belong in this reality, especially one as bleak and uncompromising as this one. Koolhoven’s vision of a gritty Western is one that is violent, unforgiving, and most of all dangerous at every corner, and he manages to achieve that vision by going all out with some of the choices that are made here, refusing to back down on any of the grimness that is displayed here and making it exactly as he’d want to make it. Thankfully, Brimstone isn’t entirely up its own end to neglect being a strong narrative as well, one that requires a lot of patience and tolerance for you to get by.

Brimstone is a gritty Western that proudly refuses to compromise its intense amount of violence and danger over an extended running time, but it is also a compelling story driven by a masterful performance by Dakota Fanning as well as a villain that you absolutely want to see be defeated, even if he may be too evil for the film’s own good.