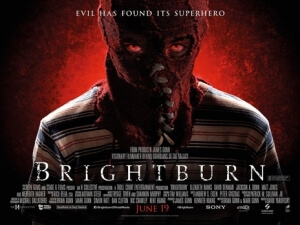 BASICALLY…: When a young boy (Dunn) discovers he has extraordinary superpowers, he begins to use them for sinister purposes…

While Zack Snyder’s Man of Steel was – and remains – a very divisive movie among audiences, the vast majority can agree that the now-infamous third act which sees Metropolis reduced to rubble thanks to Superman’s “heroics” was perhaps one step too far, with some even labelling the movie and even the character psychotic as a direct result.

It is these criticisms that have inspired producer James Gunn to spearhead a project that toys around with that intriguing little idea: what if Superman was, indeed, a psycho? That forms the basis for Brightburn, a movie that makes the most out of its set-up with the fairly low budget that it has, and while it doesn’t always succeed at fulfilling its potential it remains an amusing little B-movie with a super-powered twist.

The movie begins when couple Tori and Kyle Breyer (Elizabeth Banks and David Denman) come across a crashed spaceship by their farmhouse in the Kansas town of the title, and the infant child that’s inside of it; unable to conceive children of their own, they take in the boy and name him Brandon (Jackson A. Dunn), who grows up to be a seemingly happy kid. However, when he turns 12, he begins to discover that he comes equipped with some incredible superpowers – among them super-strength, flight and laser eyes – but he also develops a string of sinister behavioural patterns, including keeping pictures of organs among his pictures of swimsuit models, breaking a classmate’s hand just by squeezing it (after he had previously peeped in on her outside her window), and eventually brutally murdering with said powers that happens to stand in his way. As both Tori and Kyle struggle to accept that their adoptive son might be a cold-blooded killer, it might be too late to stop their young son’s wrath upon the world.

Obviously, this movie couldn’t use any of the Superman lore otherwise Warner Bros and DC would have quite a bit to say to distributor Sony, but this whole set-up, these characters, and even the exact powers that this little psycho possesses are indeed just Superman in all but name; the Breyers are just thinly-disguised Martha and Jonathan Kent stand-ins, young Brandon is obviously Clark Kent (the character even shares the same name as one of the actors who played Superman in a movie), and there’s even a brief appearance from a Lois Lane-type who’s the poor young classmate that suffers a crushing encounter with the super-powered little creep. The filmmakers, among them director David Yarovesky and writers Brian and Mark Gunn – producer James Gunn’s brother and cousin respectively – are fully aware of the fact that these parallels are all anyone will be thinking about when seeing this film, from the near-identical characterisations and set-ups to some of the visuals and dialogue scenes feeling very similar to the ones from Man of Steel, because that’s largely why this movie was made, to offer a more horror-based look at a very famous superhero origin story, that itself was based on the negative feedback from a version of the actual superhero origin story. It’s futile, then, to have a go at this movie for feeling way too similar to something else, especially when that was the whole idea in the first place.

What it does end up doing with this set-up, and with the $6-12 million budget that it had, is about as intense and low-key as any movie made by Blumhouse for the same amount of money, but because of that some people might end up disappointed if they go into this expecting something as grand and epic as any Superman film, which it really isn’t; this is a movie that focuses primarily on the childhood of said super-person, entirely within the small town he and his parents reside in, and with the boy’s adoptive parents being bigger core characters than even the young psycho, so of course there’s no big cities to fly around in or menacing bad guys to fight – just the poor, defenceless people that he decides to pick off like a slasher movie villain. For what little budget they worked with on this film, I would say they’ve made the most effective movie that they could with their limited range, with some seriously creepy shots and scenes playing out rather well, and some impressive effects work that highlights the gore features pretty effectively. However, the script falls into a couple of logical lulls at times, especially when both Tori and Kyle – particularly the former – end up giving their adoptive son the benefit of the doubt way too often; even when the evidence that he’s been doing all these horrible things throughout the movie is staring them right in the face, at least one of them is still convinced that their son had nothing to do with it.

It also ends on a pretty dour note, which sets up potential world-building spin-offs featuring similar takes on other famous superheroes – but the combination of a mixed critical reception and an underwhelming box office performance means that we will probably not be getting those movies, which sucks because I would personally like to see other films like this that take something we know like the back of our hands and remould it as something much more sinister. While this film isn’t entirely what it could have been, the idea is strong enough to at least arouse interest, which at the very least makes you curious to see more alternative versions of the heroes we thought we knew growing up.

Brightburn makes the most out of its alternative take on Superman with the fairly low budget that it has, and although it doesn’t always meet its full potential due to a combination of budgetary restrictions and a couple of script problems, the idea is strong enough that it makes you want to see other movies like this, even though it’s likely we’ll never see them in this universe thanks to its critical and financial underperformance.

Check out Brightburn showtimes in London
on Walloh.