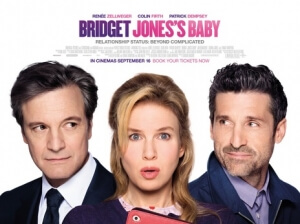 BASICALLY…: Bridget Jones (Zellweger) discovers that she is pregnant, and isn’t sure if the father isn’t either her ex Mark Darcy (Firth) or her charming new beau Jack (Dempsey)…

Don’t worry, book readers: Mark Darcy DOESN’T die in Bridget Jones’s Baby, as he did in Helen Fielding’s third book about the eternal hopeless romantic Bridget Jones, subtitled Mad About The Boy. He’s partly central to the plot, but none more so than Bridget herself, who is once again played by Renée Zellweger after a brief acting hiatus, and brings back the goofy energy that awarded her praise in this role in the first place.

That can also be said about the film itself, which after the disturbingly inferior Bridget Jones: The Edge of Reason (which this film wisely pretends never existed) brings back the sweet charm and general likability that audiences first fell for back in 2001 with Bridget Jones’s Diary, and reminds even the most cynical of romantic-comedy viewers why that film remains a must-see classic of the genre.

We pick up with Bridget as she’s celebrating her 43rd birthday, alone once again in her tiny London flat while “All By Myself” plays in the background. Just when you think it’s going to be nothing more than a cheap rehash of the first film again, the music is suddenly switched to House of Pain’s “Jump Around”, and the film really kicks into gear. As we learn, she’s been separated from her true love Mark Darcy (once more played by Colin Firth) for a few years now, and is focusing on her career as a producer for a TV news show that is being slowly taken over by a much younger crowd. On a trip to Glastonbury, she meets and has a one-night-stand with handsome American bachelor Jack Qwant (Patrick Dempsey), and not long after has a spontaneous fling with Darcy. However, Bridget soon finds that she’s pregnant, and even worse she’s not entirely sure whether Mark or Jack is the father, leading to a series of hijinks only Bridget could get herself into.

Oh, and if you’re wondering where Hugh Grant’s Daniel Cleaver is in all of this, he’s… erm… not around. Anyway, moving on…

The film definitely benefits from not just having Zellweger back in her signature role, but also from having director Sharon Maguire return for directing duties after sitting out The Edge of Reason (and if you’ve seen that movie, can you blame her?). Maguire’s playful touch lends the film a genuine sweetness that will have audiences falling in love with the characters and their situations as they did before, and is certainly a lot more grounded in comparison with some of the areas that The Edge of Reason visited. Sure, the main premise may reek of something that a stale sitcom would probably conjure up, but again the execution is mostly solid and warm-hearted enough to make you forget that, when you really break it down, is a little bit silly, even for a rom-com. Nonetheless, Maguire brings the warmth back to the series that was sorely missing from the previous film (and with that, I have exhausted out the “Edge of Reason Reference Machine”, which I’m not even sure why I own, for this review) and makes this a fairly pleasant watch.

Zellweger is of course delightful once again as our main heroine, and ignoring all those sexist articles about plastic surgery she still looks great for the part, having aged gracefully and allowing Bridget to become more mature, but not necessarily grow wiser, over the past few years. There are small scenes that really remind you what a talented actress she can actually be – the scene where she sees her baby for the first time via sonogram is truly heart-warming – and she should have no problem getting her career back on track if she’s going to be anything like this from now on. Her chemistry with Firth’s tightly-wound Darcy is as heart-pounding as ever, even when Darcy does things that are seriously dick-ish and disrespectful to the woman who might be carrying his child, although series newcomer Dempsey falters slightly by perhaps being a bit too nice, like a Disney prince that somehow worked his way into an adult romantic-comedy (I don’t think it’s any coincidence that one of his first scenes deliberately replicates Cinderella fitting the shoe). As an obvious replacement for Grant’s wilder beau Daniel, he lacks the cocky and suave manner that at least made Grant’s character a bit more memorable, and this guy’s just a bit too nice for his own good.

I’m also really not sure why the marketing made such a big deal out of who the father of Bridget’s child is, even setting up hashtags supporting both sides. Aside from bringing back unpleasant memories of #TeamEdward and #TeamJacob, that whole conflict is really not the film’s biggest plot point; it’s definitely a big part, but not the reason why it exists. Bridget Jones’s Baby exists to not just bring the series to a satisfying conclusion, but to also show the strengths of independent femininity, even when faced with life-altering circumstances like pregnancy. The character has definitely come a long way since we first met her at that Christmas party, and all these years later her journey towards maturity and self-respect is still as fresh and relevant as it was fifteen years ago, especially nowadays when, with social media dominating our lives, some women are becoming more self-conscious and fearful that they’ll never be the perfect woman.

For all those people, here’s a character and a film that shows you it’s alright to be yourself, even when you’re Bridget Jones.

Bridget Jones’s Baby is a charming and satisfying conclusion to the film series, one that brings back the warm-heartedness of the first film thanks to returning director Sharon Maguire and returning lead actress Renée Zellweger.