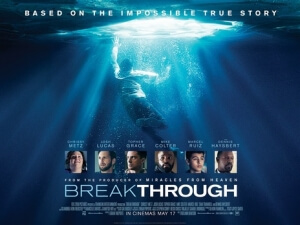 BASICALLY…: After her teenage son John (Ruiz) drowns in a frozen lake, her mother Joyce (Metz) uses the power of her faith to help bring him back…

When I reviewed the religious movie parody Jesus, Bro! last month, I mentioned that there have been numerous faith-based movies in the past which promote messages that are decisively not reflective of the religion’s good intentions; God’s Not Dead, for example, set out to blast anyone and everyone that did not follow the Christian agenda, and others like Old Fashioned and War Room promoted some rather damning and even misogynistic ideas about how a woman should act in a relationship (according to the latter, if your husband is a massive prick who’s verbally abusive and a philanderer, all you have to do is lock yourself in a closet and pray for the Lord to set it right).

However, there have been a handful of faith-based movies which do actually promote much more positive messages, regardless of the film’s overall quality; the more notable examples include Heaven Is For Real and Miracles From Heaven, which despite their initial corniness don’t tend to present themselves as hateful propaganda and instead as well-meaning and inspiring stories about faith and being a good person. The latest one of these types of religious films is Breakthrough, which is certainly inoffensive and somewhat cheesy at times, but it has its heart in the right place and features a reasonably moving story that’s okay enough to get through.

The film is based on a real-life incident in early 2015, when Guatemalan teenager John Smith (Marcel Ruiz) falls into a frozen lake whilst playing with his friends, and spends about twenty minutes trapped underneath the surface. Although he is recovered by first responders, he remains unconscious and unable to be brought back by CPR. His adoptive parents Joyce (Chrissy Metz) and Brian (Josh Lucas) are left devastated by the tragedy, but when Joyce – who is deeply rooted in her religious beliefs – hysterically pleads to God to bring her son back to life, John suddenly obtains a pulse, surprising everyone from the doctors to his parents. When he is placed in a medically-induced coma, under the care of Dr. Garrett (Dennis Haybert), Joyce remains committed to having her son make a full recovery, with the help of the new local youth pastor Jason Noble (Topher Grace) and the community’s undying support for their friend, who all do their part in ensuring that John comes back to the world.

While the movie is certainly Christian in spirit and in tone, with mentions of the religion sprinkled all throughout, it is quick to not allow itself the full satisfaction of being a straw man narrative. Unlike past faith-based movies like God’s Not Dead which, again, promote their agenda as the one and only, with other beliefs such as atheism and Islam portrayed with the most negative stereotypes you could imagine for those types of roles, Breakthrough actually has characters who are both of faith and not of faith that are shown to be actual human beings, with their own set of flaws and misconceptions that prevent them from being fully perfect. The central religious figure in the movie is Joyce, whose faith and strong belief in the power of God is what drives the plot, but instead of having her be the all-perfect protagonist like she would be in a much lesser film she has a number of personality flaws; despite her Christian beliefs, she’s sometimes portrayed as a stick-in-the-mud who doesn’t take kindly to the Topher Grace character and his radical ways of modernising the church to appeal more to younger people (which involves using rap in a hymn and talking about The Bachelor in sermons), and is even quite rude to some of the hospital staff when they’re just doing their jobs. After so many films of this type that have lionised their faithful protagonists, it’s rather refreshing to see this one be portrayed as an actual person and not someone who lives and breathes the Christian faith 24/7, which allows for more than just one point of view during this increasingly miraculous recovery process.

It’s a competently made movie, with more ambitious shots and camera angles than you’d normally see in a standard religious movie – then again, that may be down to this film having a higher budget than the majority of Pure Flix’s library combined – and some decent performances from a strong cast. Although at first Metz can seem quite obnoxious, that’s probably more to do with her character than the actress herself, and she does completely fine with the more emotional material (all those days spent on the set of This Is Us must have really prepared her for that), and Topher Grace has some good moments as the initially cringe-worthy but all-around good-hearted pastor. The direction by Roxann Dawson gets the job done, and it’s a serviceable script that, while definitely cheesy in places – a scene where people gather outside the hospital window and start singing is pure Stilton – makes a fine effort to tell this inspiring true story as, ahem, faithfully as it can.

It’s definitely got some flaws to it – it is a little longer than it needs to be, with both its epilogue as well as a sub-plot involving Luke Cage’s Mike Colter, as one of the first responders who thinks he hears the voice of God while he’s rescuing the boy from the ice, being segments that could have easily been cut out of the film – but considering how low the bar has been set for these religious movies, this is one that just about sticks the landing, and it took having an actual Christian message to do so.

Breakthrough is a faith-based drama that’s a notch above some of the previous religious movies, for its balanced depiction of people with and without faith, and its competent production values from its strong acting to ambitious direction.

Check out Breakthrough showtimes in London
on Walloh.