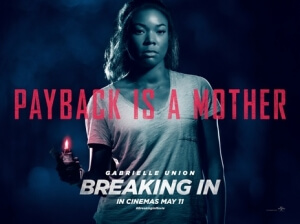 BASICALLY…: A mother (Union) must take matters into her own hands when criminals infiltrate her father’s mansion and hold her children hostage…

Sometimes, I have absolutely no idea how so many scripts that feature the same formulaic plot over and over again get to see the light of day, while more original and ambitious projects almost never get a chance to even be read by the big studios. Just because an idea may have worked in the past doesn’t mean you can replicate it repeatedly for every other similar movie that comes afterwards, and in the case of Breaking In, which just does the same old generic home invasion plot line with almost nothing new added on to it, it seems that they just ran with how familiar it all is without once considering how the audience is probably sick to death of it by now.

In this film, the action kicks off when a woman named Shaun Russell (Gabrielle Union) and her two children, teen Jasmine (Ajiona Alexus) and young son Glover (Seth Carr), arrive at the estate of her wealthy and estranged father after he dies. Not long afterwards, four men led by Billy Burke’s Eddie descend upon the house and hold the children hostage, while Shaun is trapped outside. Eddie tells her that they are there to find a hidden safe filled with money, and that they will keep the kids under their watch until they find it – but Shaun, unconvinced that the criminals are going to let them live afterwards, begins to use her instincts to try and get back into the house and rescue her children.

Do yourself a favour, and just watch the trailer for this film, which as always is at the top of this page for your convenience – what you see in the trailer is pretty much everything you get in the actual movie, with no surprises that they’re hiding from you, no sudden twists that come out of nowhere – or at least there aren’t any that you can’t see coming a mile off – and absolutely nothing to distinguish itself whatsoever from any other home invasion thriller out there. Everything in this movie, from the characters to the motivations to the deaths (and it’s not a spoiler to say so, because in a film like this there’s always at least one fatality), is stuff that you know like the back of your hand, because you’ve seen them all done better and more interestingly in other films like it. You can pretty much play home invasion bingo with the amounts of clichés this movie contains, including the sadistic and psychotic criminal who wants to kill ‘em all, the one guy with something of a moral conscience, and the hi-tech gadgetry conveniently located inside the house like numerous surveillance cameras and even a drone; by the time the film reaches the halfway mark, you’ll most likely have a full house and are ready to shout “Bingo!” at any given moment.

The film isn’t exciting or entertaining enough to set itself apart from how stock and throwaway the script to this movie is, because you’re largely just bored from the cardboard cut-outs that pose as characters and the story which is going exactly as you predict it’s going to go, not to mention a main character whose plausibility is called into question several times in this movie. Gabrielle Union is a fine actress, and she does her best with what little material she’s been given to work with, but the film never sets up her character as someone who would know how to do any of this, let alone have the smarts to outwit these criminals half the time, and you just don’t buy her sudden badassness when all of a sudden the film decides to turn her into an action hero. They do try and explain it by saying that it’s her motherly instincts that are causing her to do all this extreme stuff, but we all know it’s complete and utter bollocks, not to mention somewhat sexist; can’t she just, y’know, be a badass instead of acting like one because she’s a mummy and her offspring are in danger? It just comes across as a failed big-screen attempt at making Gabrielle Union an action heroine in the same vein as someone like Michelle Rodriguez or Linda Hamilton, but hopefully that Bad Boys TV spin-off she’s currently attached to will fix that problem, whenever it’s scheduled to come out.

It’s the kind of movie that could have been directed by anyone and nobody would be the wiser, but the odd thing about this movie is that it’s actually made by someone with a few notable projects under their belt. James McTeigue, the director of films like V for Vendetta, The Raven, and that rubbish Milla Jovovich/Pierce Brosnan movie Survivor from a few years ago (among a few others), is the one behind this film, which is really odd because while his films may not be masterpieces by any means – although V for Vendetta does have its fair share of fans – they were ones that more or less set for himself a directorial identity, that of a slightly stylised and sometimes intriguing vision. There is none of that on display in Breaking In, which looks and feels as generic a direction job as any other, so you wonder why McTeigue was even hired for this film in the first place; look, I know Survivor sucked and it barely made anything at the box office, but surely times aren’t that hard for him to sign on to something so cookie-cutter generic just for an easy paycheck. If you’ve seen V for Vendetta, you know that this guy can direct something interesting, at least more so than this, so just give the guy a worthwhile project to work on, for his and everyone’s sake.

There’s really not much else to say about this film, and frankly I’m shocked that I had this much to say about it to begin with. If you’re really in the mood for a good old fashioned home invasion thriller, just stay home and watch something like Panic Room or When a Stranger Calls instead; there’s really no reason to head out to the cinema to see something as generic as Breaking In, especially when there’s much better examples of the home invasion thriller right in your very home.

Breaking In is an extremely generic and unoriginal throwaway home invasion thriller that just runs with all the expected clichés without adding anything new to them, which makes you want to watch much better films like it instead.