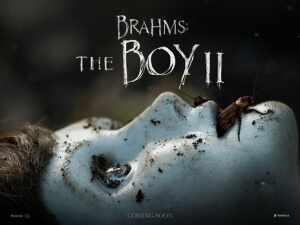 BASICALLY…: When a family moves into the Heelshire Manor, their young son (Yeoman) finds and befriends a porcelain doll named Brahms…

It’s only fair that straight after seeing Vivarium, a very good horror movie complete with its own creepy-as-hell child, I decide to take a look at another horror movie with an additional creepy kid, only this one – would you believe? – is nowhere near as good.

Brahms: The Boy 2 is the sequel to William Brent Bell’s slow-burn horror from 2016, which wasn’t especially great as it took its increasingly ridiculous plot way too seriously, but it must have either ticked some boxes with certain people or made enough at the box office to warrant a follow-up, with Bell returning to direct and a whole new cast to subject to the titular porcelain doll’s terror. However, you really don’t need to have seen the first film before this one, because this is the kind of sequel that practically retcons everything that the previous one set up, and instead turns itself into a mockbuster of creepy doll movies like Child’s Play and the Annabelle movies, only it’s far duller and more unentertaining than even the weaker entries of those series.

This film focuses on a family made up of career parents Liza (Katie Holmes) and Sean (Owain Yeoman), and their young son Jude (Christopher Convery). After a traumatic incident leaves Jude a mute, the parents decide to uproot from their London home to a guest house in the countryside, which happens to be on the same estate as the large mansion from the last film. Jude finds the porcelain doll named Brahms – destroyed in the previous film, but mysteriously put back together here – and forms an unusual connection with it, which begins to freak out the parents, especially when they begin to suspect that the doll might be more than just a mere inanimate object.

It doesn’t take long for this movie to completely renege the events of the first movie, wherein – spoiler alert for the previous film – the doll was never alive at all, but the plaything of the real Brahms who was still living within the mansion’s walls. This one writes itself out of that corner by just making the doll a straightforward supernatural figure, which right there feels like a cheap cop-out from the slightly intriguing – if rather silly – twist that the previous Boy movie offered, and with this new direction adding nothing new outside of ripping off so many creepy doll movies which makes it feel even more fragile than the doll itself. Because you’ve seen so many of this film’s twists and scares before, and done so much better, it very quickly becomes a dull slog to sit through, with nothing ever becoming scary or even all that startling, which at least the first film achieved with its somewhat gothic atmosphere. This movie has none of that, which leads me to think that William Brent Bell never saw the first movie, even though he made the damn thing, because this sequel captures nothing of what made that previous film a very slight notch above the standard horror fare.

Another reason why you just don’t care about anything is because not only is the plot just a redundant rehash of creepy doll movie clichés rolled into one, but the characters are so flat and end up making stupid decisions that make the movie far longer than it ever needed to be (and at 86 minutes, it’s not like it was even that long in the first place). The parents in this movie, especially Katie Holmes, don’t think until the last minute that this weird-looking doll might have some sinister intentions, even after it’s shown clear signs that it is not at all what they think that it is; instead, because they are such typical helicopter parents who constantly cave in to their rather indulged son, they let him get away with most things, while making a minimal effort to put their foot down. On top of that, it turns out that so many of their problems with the doll could have been fixed by a quick Google search on this doll’s history, but they not only realise this way too late in the game but the thought never even occurs to them that this random doll that their son found mysteriously in the woods might have some sort of history that has to be documented in some way online. Somehow, the writing in this makes far less sense than the previous film, which was already ridiculous to begin with but at least knew roughly what it wanted to do; here, it just seems like Bell just made up a bunch of excuses off the top of his head as to why this movie isn’t over in about 20 minutes, like it would be in the real world with people that actually had a brain.

The scares are cheap, the pace is way too slow, and not even the acting is strong enough to save some of this material (Katie Holmes does fine, as does Ralph Ineson who shows up in a pivotal supporting turn, but young child actor Christopher Convery sadly turns in a pretty wooden performance with one-note facial expressions; if you want to see a creepy kid performance done right, then for the love of God watch Senan Jennings in Vivarium act circles around this kid). Most of all, it’s boring; there’s nothing to the story or characters to keep you hooked, no scares to entertain you, and it doesn’t even have the luxury of having any interesting visuals to speak of, leaving you wishing that you’d rather endure any of the other films it’s ripping off instead, because they are at least entertaining to watch. This one, though, you’d be far better off doing anything else with your day than sit down to watch this utter nothing of a movie.

Brahms: The Boy 2 retcons the events of the previous film and instead replaces them with a very dull rehash of several creepy doll movie clichés, which fail to generate any scares or moments of interest, with characters who do stupid things because if they were smart then this movie would have been over before it began, adding up to a rather trying waste of time that’s as lifeless as the central porcelain doll.

Want to decide what the movie’s like for yourself?
Check out Brahms: The Boy 2 showtimes in London
via