Boys from County Hell (Review) – Vampires Are Back, And No Longer Suck 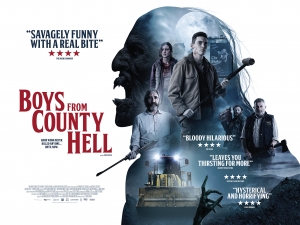 BASICALLY…: After accidentally reawakening a legendary vampire, a bickering father (O’Neill) and son (Rowan) must survive the night…

It’s been a good while since we’ve had ourselves a halfway decent vampire flick, especially since the Twilight series pretty much turned the monster sub-genre into a prissy, sparkly laughingstock. Now, with Blood Red Sky doing well on Netflix (though I have yet to watch it, it does sound like an interesting new update to the bloodsucking canon) and writer-director Chris Baugh’s Boys from County Hell gaining considerable buzz, it seems that we are finally far enough away from the vision of Stephanie Meyer for vampires to be cool once more.

Although, Boys from County Hell doesn’t exactly go for the traditional vampire route, instead offering some interesting new additions to the lore that keep things engaging, along with a strong sense of humour and some inventive moments of gore which make it one of the more entertaining bloodsucker movies of late, even if it sometimes struggles to maintain its balance.

The film is set in the sleepy Irish town of Six Mile Hill, which is most famous for a cairn (for the uninitiated: a pile of rocks) said to be the resting place of ancient vampire Abhartach, which Bram Stoker allegedly based his novel Dracula on. It is this cairn that directionless young locals Eugene (Jack Rowan) and William (Fra Fee) often use to scare tourists as a means to pass the time, but tragedy soon strikes the pair and Eugene, hired by his unsympathetic constructor father Francie (Nigel O’Neill) to work on a controversial bypass, ends up knocking down the cairn to build the road on top of it. Naturally, this causes an ancient evil – suspected to be Abhartach himself – to rise up and begin claiming the blood of the townsfolk, unless father and son – and their small number of allies – can put an end to the terror.

The vampirism in Boys from County Hell is certainly bloody, but one of Baugh’s strengths lies in not settling for typical activity one associates with vampires. In this, the blood is very literally streamed out of people, through their noses, eyes, ears, and God knows where else, instead of the classic neck-bite; an opening prologue shows off this rather chilling practical effect which, aside from being visually impressive for the tiny budget the filmmakers were clearly working with, gives a genuine sense of menace that few other vampire movies of late have managed to achieve. There are other neat add-ons which shake up the classic vampire rulebook; a stake through the heart doesn’t really do much, while – without giving away too many spoilers – it isn’t exactly the vampire himself turning people into other bloodsucking creatures. Characters in the movie even trash Bram Stoker’s iconic novel for its introduction of what society deems vampires to be, as though the filmmakers are asking us to also set aside these subconscious thoughts and experience something completely different. It’s things like this which Baugh uses to keep things reasonably engaging, because if it turned out that this was just more of the same when it comes to vampires, it would have gotten older than it already is.

It is also a rather funny film, with much of the comedy coming from the sheer frustration of our heroes when very few things seem to be working against their fanged foes. It’s nowhere near as deconstructive towards the vampire sub-genre as Shaun of the Dead was to zombies, but Boys from County Hell does get some fun kicks out of the ways in which the lore is played around, such as the use of blood beyond it gushing out of people like a waterfall (shots of it being absorbed into the ground are engrossing), and a very unexpected final weapon which may or may not be used to finally do the creature in at the end. It isn’t a laugh-a-minute riot, though there’s no need for it to be when it’s also doing a decent job of being a vampire film with its own rules.

Admittedly, though, the two tones don’t always mesh together well. It’s the kind of horror movie where almost every time there’s a sinister or rather creepy moment, there’s a one-liner or piece of physical humour waiting in the stands to come and calm things down, which makes it confusing as to what the movie is ultimately aiming for. As for the characters, while there are certainly some likeable leads, very few of them are memorable enough to really stand out, despite some of the committed performances here. You’re along with them about as much as the film wants you to be, but beyond that there isn’t much of a reason to look back on them with nostalgic memories.

While it’s not entirely the big and all-encompassing vampire comeback we might have hoped for (maybe it’ll come with Marvel’s in-development Blade reboot), Boys from County Hell is a formidable and entertaining enough way to pass the time until it eventually does come.

Boys from County Hell is an entertaining vampire horror-comedy with some inventive new variants of the classic blood-sucker lore and an often funny script, though the two tones don’t always mesh well together while the characters, likeable as some of them are, aren’t memorable enough to stand out. At the very least, though, it doesn’t suck.

Boys from County Hell is now showing in cinemas nationwide – click here to find a screening near you!