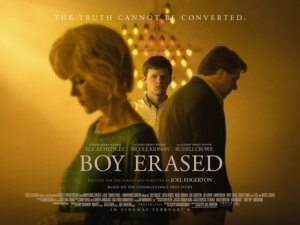 BASICALLY…: After he is outed to his Baptist parents (Kidman and Crowe), Jared (Hedges) is forced to undergo gay conversation therapy…

Joel Edgerton’s first film as both writer and director, the 2015 horror film The Gift, was an endlessly frightening movie that delivered its scares smartly and left people with such an unnerving feeling of fear and even shame long after they had seen it.

Funnily enough, the exact same thing can be said about Edgerton’s second writer-director effort Boy Erased, with the key difference being that this is not explicitly a horror film – although, given its disturbing and downright sinister portrayal of gay conversion therapy, it might as well be one.

Based on the memoir of the same name by Garrard Conley – who is renamed for the purposes of this movie, along with several other characters – the movie is about a young man named Jared (Lucas Hedges) who, after a traumatic experience at college, is outed as gay to his Southern Baptist parents, hairdresser Nancy (Nicole Kidman) and Baptist preacher Marshall (Russell Crowe). Naturally, his conservative parents are more than freaked out by this revelation, and they give him the option to enrol in a gay conversion therapy assessment program in order to continue living under their roof. Jared reluctantly agrees, and he is soon whisked off to the Love In Action program in Arkansas, where he and several other attendees are subject to several “corrective” – not a quote from the movie, just a re-enforcement of how bollocks it is – exercises led by chief therapist Victor Sykes (Edgerton) designed to “cure” them – again, just re-enforcing what complete and utter bollocks it is – of their homosexuality.

The way that Edgerton portrays the very methods of gay conversion therapy in this film, not to mention the very establishment in which it all takes place, is practically like a prison movie; there is barbed wire fencing all around the building, as well as strict rules including never crossing your legs whilst sitting, and that’s just the place itself. The attendees are effectively treated like inmates, forced to store all their belongings including mobile phones and even harmless writing notebooks in boxes kept by stern guards, subject to rigorous physical exercises intended to amp up their masculinity, are humiliated in brutal and psychologically upsetting manners – one is give a pretend funeral at one point, where he is beaten with Bibles by the therapists and even his own family – and not a single one of them is even allowed to go to the bathroom without a chaperone staring intensely whilst you do your business. There’s no doubt that the very practise of gay conversion therapy is disgusting, morally reprehensible, and wrong in every sense of the word, and Edgerton through a combination of focused writing and thoughtful direction does a very effective job of showing just how rotten it truly can be, and how damning it can be for the mental state of anyone unfortunate enough to attend; the film does this more effectively than The Miseducation of Cameron Post did, which certainly didn’t shy away from the evils of the practise but also didn’t go nearly as deep into just how evil it is as this movie does. Both movies are night and day when it comes to their tone and overall impact, with this one being much more of a straightforward drama than the other one which had a bit more of a sense of humour to itself, but Boy Erased is the better film in terms of showing how messed up the practise of gay conversion therapy can really be, especially when it’s in the style of a film you’d normally associate with other movies like The Shawshank Redemption or Starred Up.

It also has a slight edge over The Miseducation of Cameron Post in that this one at least had a more interesting bunch of leading characters; Jared, portrayed excellently by Lucas Hedges, is a person who you really sympathise with as he goes through such a horrific series of events throughout this movie – even before he starts going to the program, he is horrifically raped by a fellow student (Joe Alwyn) at college, who ends up being the one who outs him to his parents just to confirm what utter scum he is – and are rooting for to just stand up for himself against these bullies posing as therapists, including one played by Flea from the Red Hot Chilli Peppers who’s revealed to be this toxic machismo homophobe that you really want to see get punched at some point. Edgerton, who in both films he’s thus far directed have seen him play the absolute worst of humanity, is a really creepy villain who’s frightening because he’s actually quite good at his job; he’s charismatic, he’s funny, and he’s got a natural knack for selling the most banal things to a person, even when it’s the claim that their homosexuality is completely misguided, and again he’s another person you want to see get his comeuppance from our very sympathetic protagonist (though an ending text reveals something quite unexpected about the real figure that Edgerton’s character is based on). Meanwhile, you have Nicole Kidman and Russell Crowe giving some of their best performances in a while, and all of it coming from a director who, as an actor himself, really seems to know how to bring the very best out of people you never would have thought had it in them; just as Jason Bateman, who gave some of his very best dramatic work in The Gift after primarily being known for comedy.

With this film, Edgerton is now officially a director to get excited about because he’s someone who really knows how to effectively portray the true horrors of this world, especially when it comes to something as sinister and downright evil as gay conversion therapy.

Boy Erased is a strong sophomore feature from writer, director and co-star Joel Edgerton, which sees him portray the horrors of gay conversion therapy in an effective and often disturbing manner – most notably like a prison movie – with excellent performances all across the board, including a wonderful Lucas Hedges as a very sympathetic lead.