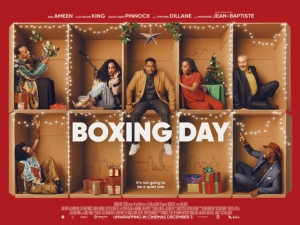 BASICALLY…: A writer (Ameen) reluctantly returns to the UK from America to spend Christmas with his family…

In a number of ways, Boxing Day is a rather significant release. It is labelled as the first British Christmas-set movie to feature a predominantly Black cast, and so casts light on a vital part of British multiculturalism that other UK-centric festive movies either side-line or ignore altogether. In that regard, it’s genuinely cool and even heart-warming to see a Christmas movie as mainstream as this be made for, with, and by true Black artists in this country that might watch something like Love Actually or Last Christmas, and feel left out by their genuine lack of representation.

All of that being said, however, Boxing Day is kind of an unfortunate mess.

The film marks actor Aml Ameen’s directorial and co-writing debut (script duties are shared with Bruce Purnell, who like Ameen is also pretty new to the feature screenwriting game), and as much as Ameen intends the best that he can with his film, which he apparently based on aspects of his own life and upbringing, he manages to turn in an awkwardly stilted movie which lacks cohesion in a convoluted set-up which leaves you caring about almost nobody, and the kind of genuine warmth that other Christmas movies are able to introduce without any effort.

Ameen stars as Melvin, a British author who now lives out in LA with his beautiful girlfriend Lisa (Aja Noami King), after a devastating family incident one Boxing Day caused him to pack up and leave his family home. After an exceptionally awkward proposal (and I’m not just talking about the way it’s written), Melvin and Lisa travel to London together so that Melvin can promote his latest book, but his return soon catches the attention of his eccentric British-Caribbean family who aren’t entirely forgiving of his decision to leave, especially his former lover Georgia (Little Mix bandmate Leigh-Ann Pinnock in her acting debut) who has since gone on to become a world-famous pop singer. This sets the scene for an uneasy family reunion between Melvin and his numerous relatives, with Lisa struggling to fit in to the family’s unorthodox traditions and establishing a bitter rivalry between Georgia who still very much has feelings for Melvin.

On paper, Boxing Day seems like the typical template for a Black-ensemble Christmas movie import from America, from Almost Christmas to The Best Man Holiday (except, y’know, in good ol’ Blighty instead), and with its multiple storylines and wacky contrivances it owes way more than it should to those types of films. From the love triangle subplot to one about a young hopeless romantic wherein the requited lover only really has one scene, to matriarch Marianne Jean-Baptiste planning to introduce her new white lover Stephen Dillane to the family (which is one of the more endearing strands in the entire movie), there’s enough going on to fill a wacky Christmas-themed soap opera, except that Ameen’s weirdly constrained direction doesn’t make any of it as fun as possibly could have been. It is direction that feels strangely lifeless, with some actors sounding like they’re just reading lines from a script and music cues which just suddenly butt in and out of random points in a scene. Case in point, remember that proposal scene I mentioned earlier? At first it’s set up rather nicely with a band playing in the background but as soon as Ameen starts romantically crooning all background music just stops as though there was no reason for it to be there in the first place, leaving you with an awkward feeling that you’re not entirely sure is intentional, or just a sign of very unimpressive direction.

Ameen fares a little better in front of the camera (he is first and foremost an actor, after all), but the problem is that he’s written himself to be a character who you really don’t want to root for all that much, because truth be told he’s not very likeable. Beyond the fact that he basically abandoned his family some years prior, he’s a guy who’s incapable of even letting his new fiancé Lisa – who herself has some pretty unsavoury moments, including when she holds some very vital information from him for no real reason – into his heart because of some pseudo-macho philosophy he’s adopted from being in LA for a while. Most of the other family members mostly just fade into the background, with many of them not given enough personality to stand out from one another, and it is left to not just Marianne Jean-Baptiste and Stephen Dillane to carry the heart of the film, but also Leigh-Ann Pinnock who, for her first major acting job, honestly does pretty well at bringing some likeability to a character who is written on paper to be much less desirable.

It is rather disappointing that Boxing Day isn’t better than it is, because again it is significant that such a film finally does exist after so long, so to see it falter due to filmmaking inexperience and a messy script sadly diminishes its potential impact on the general audience. You can certainly see remnants of a better movie trying to fight their way in, such as the rare few moments when things actually feel joyous as the family starts dancing together in the living room and genuinely being lively with one another, but unfortunately so much of it is shrouded in story non-starters and obnoxious characters to properly get into it. Honestly, if you want to go out and watch a British movie set around the same time of year with a predominantly Black cast, Reggie Yates’ Pirates is a way more fun and heartfelt movie than this, made by someone who is clearly a lot more confident behind the camera and in the writing room.

Perhaps the movie will find an audience, even if it’s those who until now have felt marginalised by the conveyor belt of WASP-y British Christmas movies, but it’s sadly unlikely that Boxing Day will be universally loved enough to become a new native festive classic in the same way that Love Actually is (speaking of which, there is a point where they do parody the oft-mocked “To me, you are perfect” scene, but when the scene is reminding you that you could be watching Love Actually instead, it’s a sign that the current movie isn’t doing its job as well as it could have).

Boxing Day is a well-intentioned but ultimately disappointing Christmas family movie wherein director/writer/star Aml Ameen cannot grasp the significance of his predominantly-Black cast with awkward and weirdly stilted direction, a messy script containing few likeable characters, and a lack of genuine warmth and passion that a movie like this really needs. 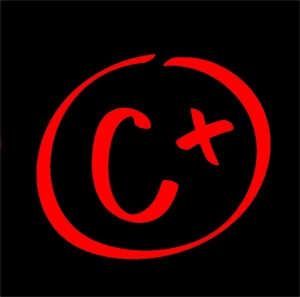 Boxing Day will be released in cinemas nationwide on Friday 3rd December 2021 – click here to find a screening near you!